We had another adventurous weekend! 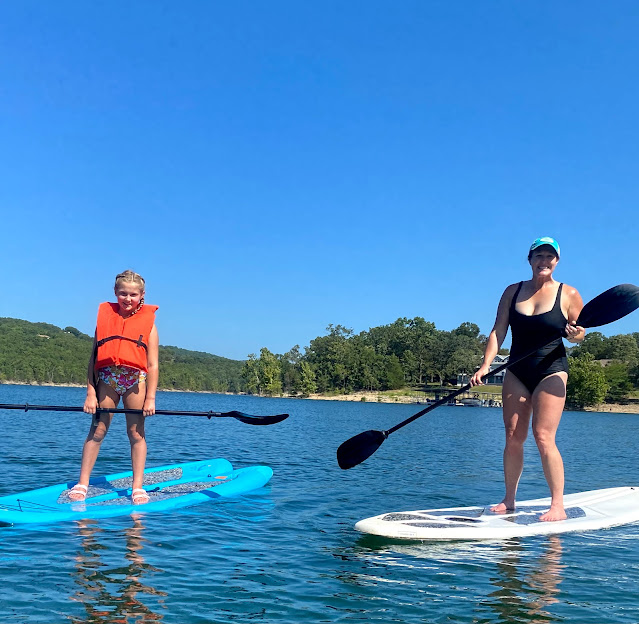 But, before that, let's pick up where we last left off, shall we? The second day of school went swimmingly for the girls.

While they were away, I finally solved the problem with the switch I had purchased to make my screens/mouse/headset/keyboard switch back and forth between the two computers I need for work. 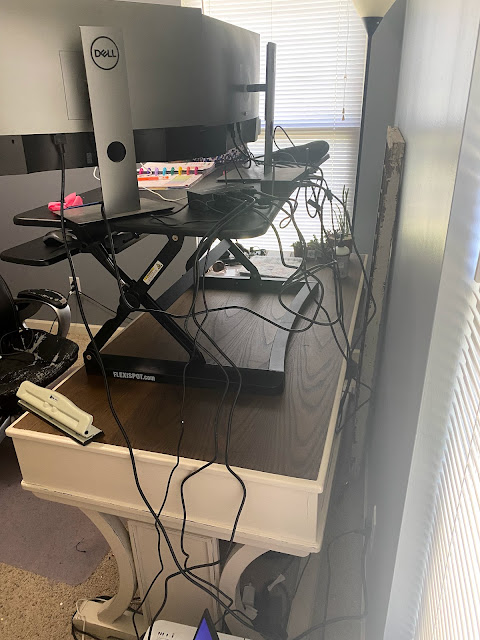 Me. I was the problem, because apparently I thought two of the cords were optional. After spending more time than I care to admit googling solutions, I looked at the hardware again and 8 cords later I can check both email accounts without sitting on the floor. This was a big win people.

That night the girls had their first art class and play practice, which went well and we came home to quickly make dinner - Asian glazed chicken thighs, rice, and a quick cucumber and onion salad.

The next day began like every other - bible study/prayer time, a little computer time, then a LexiJ workout (lower body!) and a 3(ish) mile walk. After years of my mornings being a mess, I finally have a morning routine I love. 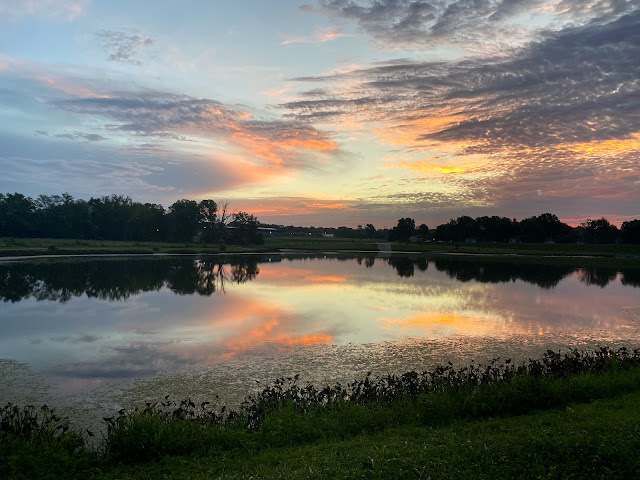 (I finished also finished The Midnight Library. I heard mixed reviews on this book, and although I can't say I loved the first half, the second half was quite beautiful and I am thankful to have stuck with it.)

I spent Wednesday evening packing for our trip, baking cookies, and then unsuccessfully putting the girls to bed. Dan usually lays with them until they fall asleep, but he wasn't home, and I don't lay still well.

We left for Branson on Thursday evening as soon as the girls finished their play practice/auditions. Ina auditioned for a singing role and even though she didn't get the part I was so proud of her for practicing the song all on her own and auditioning with confidence around girls and teachers she doesn't know very well. Side note: we made the incredibly difficult decision to stop competitive dance. Although we loved the teachers, the girls, and the studio, we decided to prioritize our family's resources differently. I know some might consider this decision minor, but it might be the most difficult one I have made as a parent to date.

We arrived to our pitch black condo (at Stillwater Resort <--recommend) with one cart full of bags, two coolers, three children, up four floors...only to realize we went to the wrong building. The second time, however, was a success and we were excited to meet with our friends. 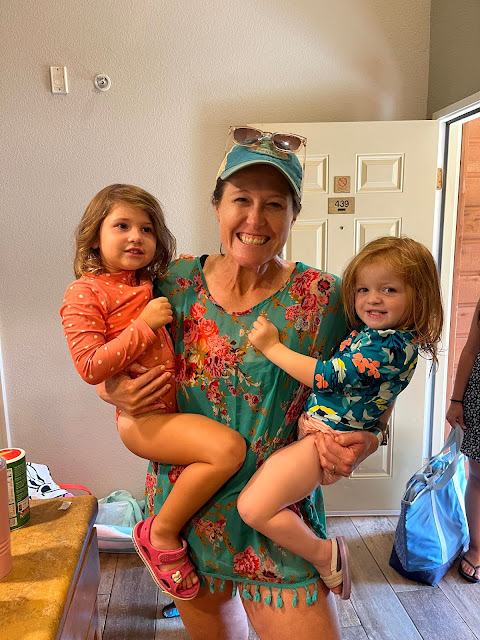 I woke up bright and early Friday morning to work from the balcony of our condo the next day, so I could shut my laptop around 2 and join everyone at the pool. 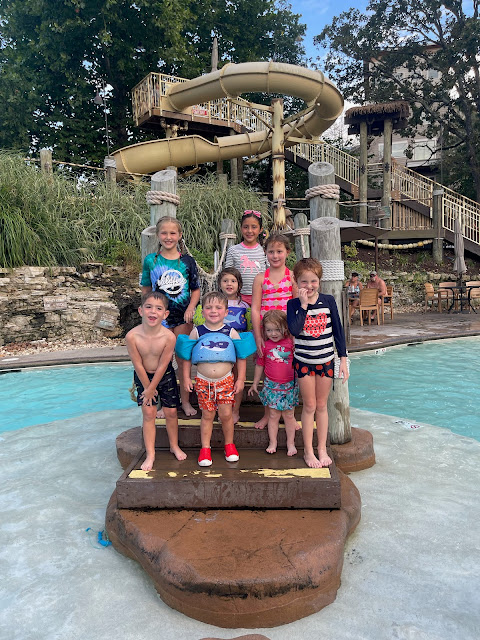 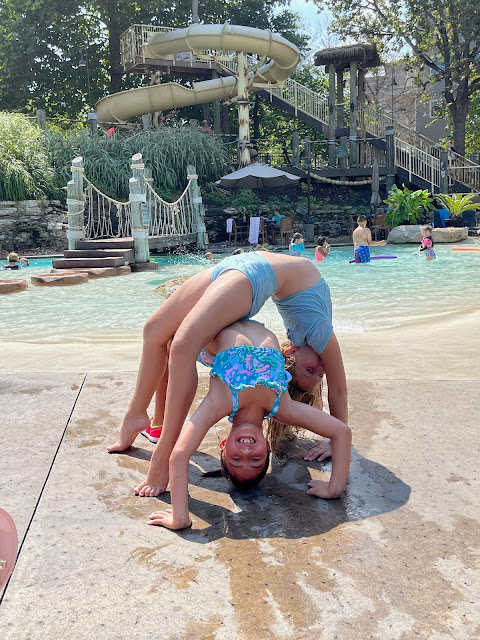 We hung around there until dinner time and hit the food trucks for some shrimp tacos and s'mores. 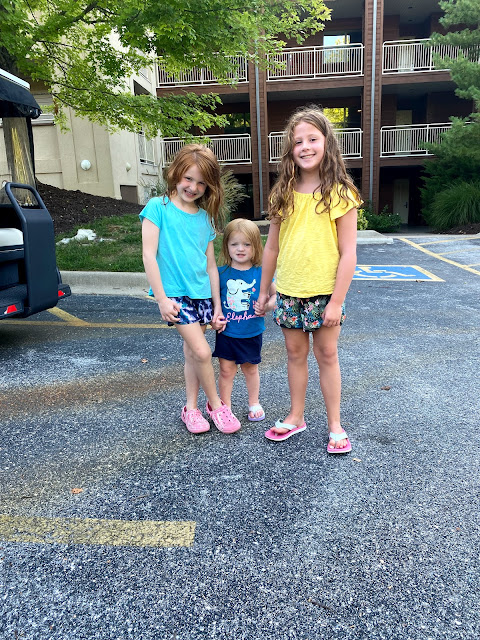 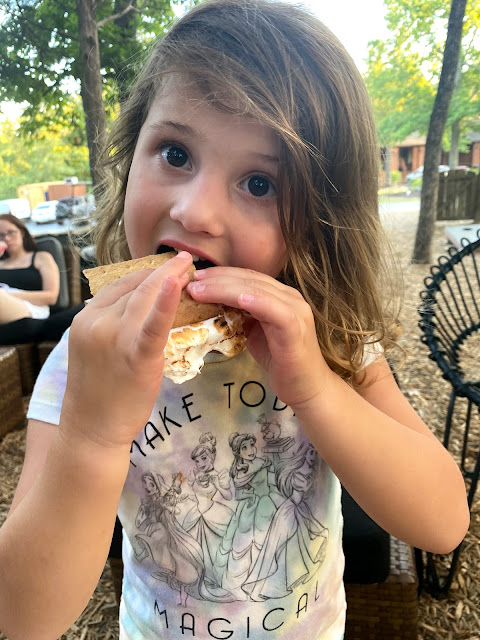 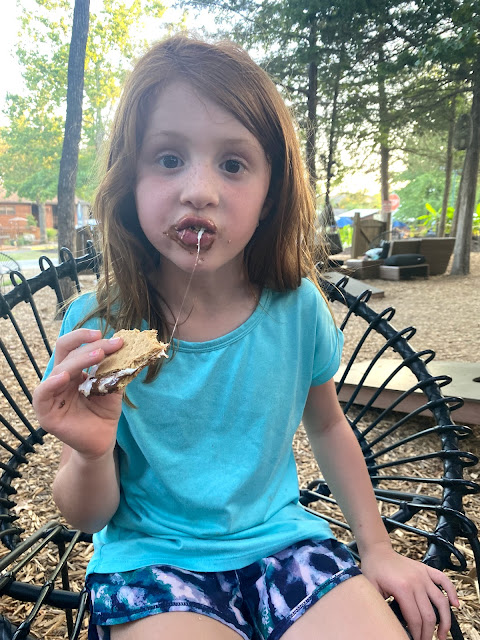 We came back to the room to celebrate our friend Keely's birthday and then finished the night watching football and playing Phase 10. 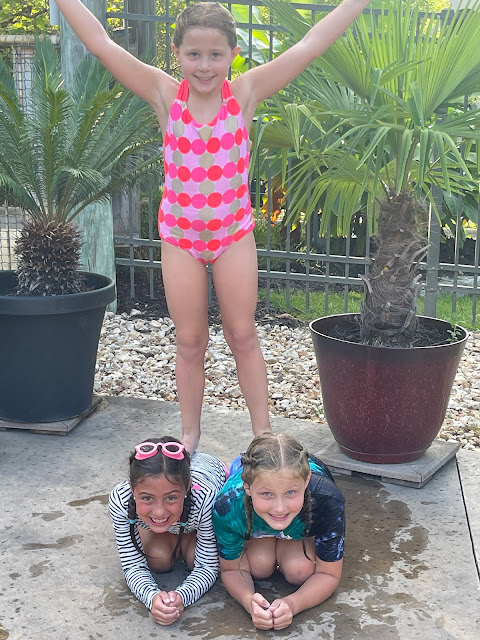 Ina has quickly earned the nickname "Card Shark" around here. I have no idea where she gets it from...

The next morning I was the first to wake up, so I did some meal planning, then Ryann and McKenzie joined me for a walk that included a nature trail, which is really just a fancy way of saying "lots of spider webs." We then headed down to the lake where we spent the majority of the day. 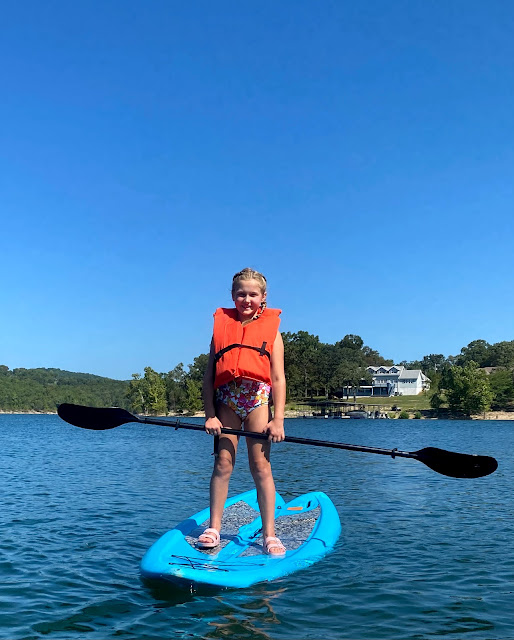 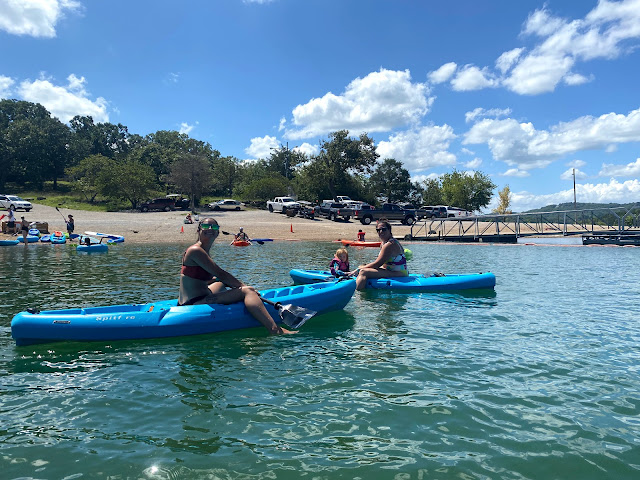 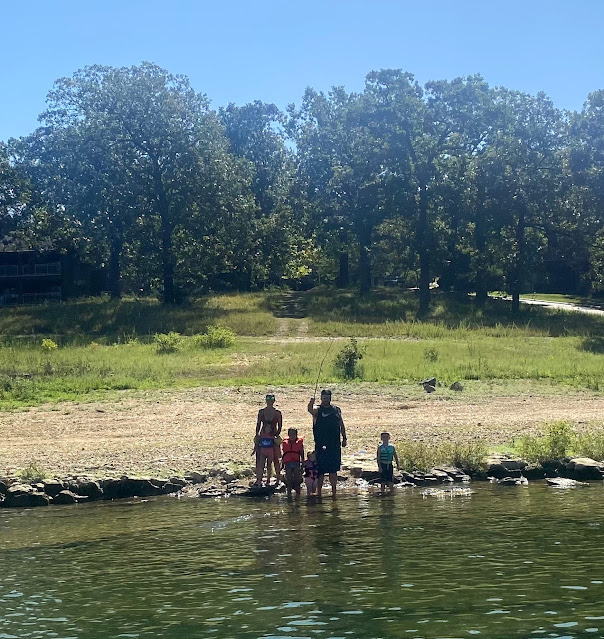 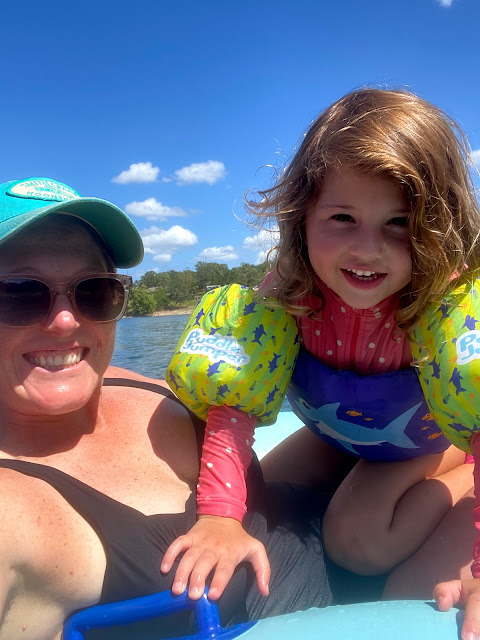 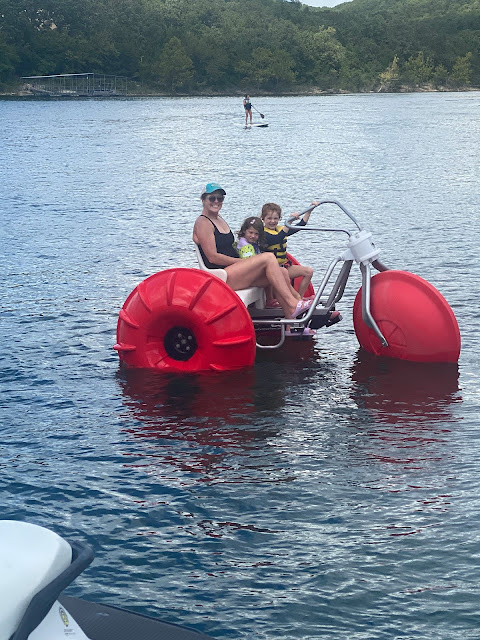 This little cove was part of the resort (everything was free) and just perfect for families of elementary aged children. It is relatively small, but large enough to have fun and feel adventurous. Watching the kids try new things on their own was just the coolest.

We had a brief intermission for lunch, and Dan and I came back to the pool near our room to start dinner. Just in case you are trying to feed a large crowd on the go, may I recommend fajitas? 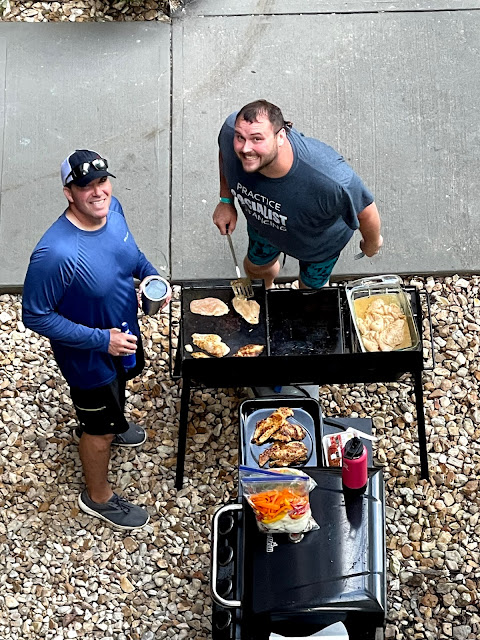 We made the rice and beans at home and heated them up in the oven while Dan cooked the shrimp, chicken, chorizo, and veggies on the grill.

We ended the evening playing Catch Phrase and laughing way too loudly for a hotel room.

We packed up yesterday morning and drove home to unpack, throw laundry all over the house, draft a fantasy football team, and watch a movie.

What a weekend! What a summer! 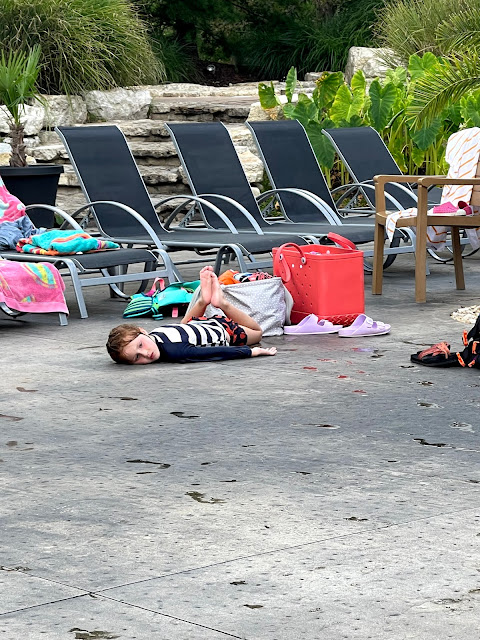