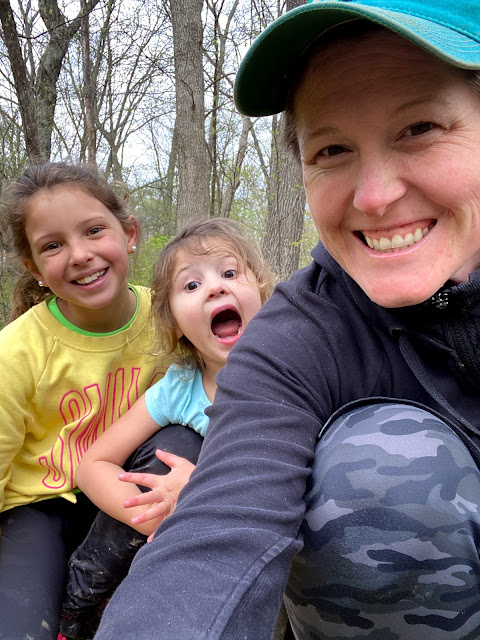 (The echo is to recognize the lack of blog posts in...months...)

I seriously hope to catch this space up on the past few months of our lives at some point...but for today I want to document the adventures of this past weekend. 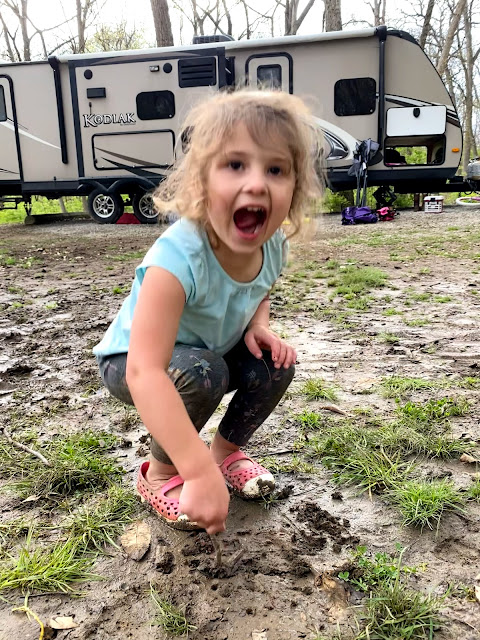 First of all...we are the proud owners of a camper. Yes, we already had a camper, but it didn't comfortably fit our family of five and required installation of a fifth wheel hitch. Combine that with the pandemic, some extra hard family stuff, and Dan constantly scrolling Facebook Marketplace and wearing me down with night after night of "Hey Racheal! Come look at this one!"...and I finally caved.

Our maiden voyage was to Watkin's Mill - a Missouri state park an hour from our house. The rest of the weekend will be summarized in numbers:

Seven loads of laundry...and counting. The mud was inescapable. 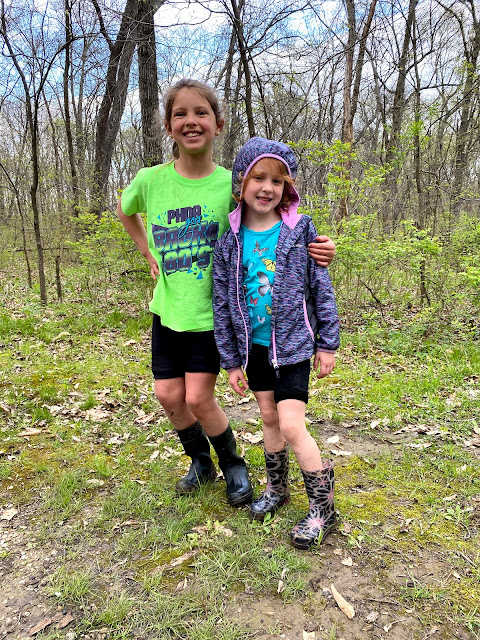 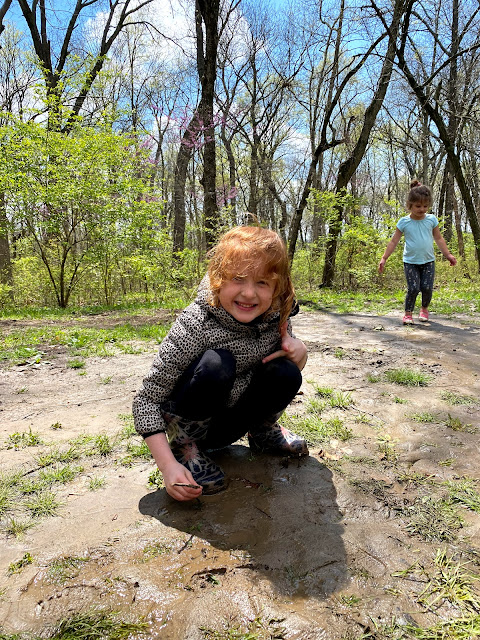 Six kids. Because Dan and I are always up for a challenge, we decided to add my niece and nephews to our first weekend in the camper, equaling a total of six kids. Their parents were busy running a half marathon...I don't know who had the more challenging task. Ha! 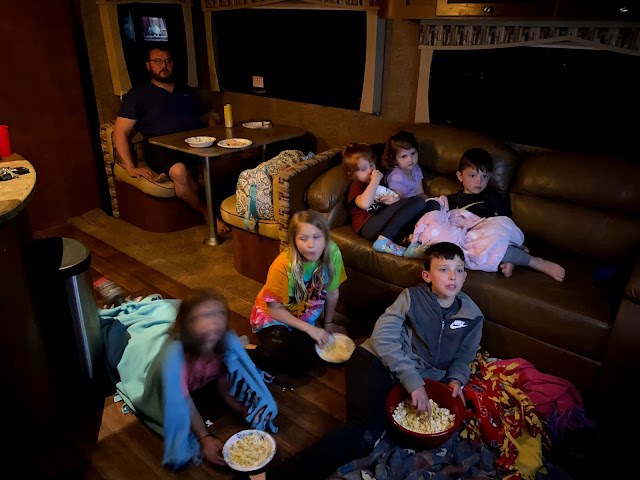 (The only picture I have of them all together is blurry, of them watching a movie and eating popcorn.)

I have zero regrets about this and while of course there were some logistical challenges (six showers to keep six sets of clean clothes dry with only one bottle of shampoo) they were amazing kids and they had an absolute blast together.

Five meals to plan. I knew that getting meals together would be crazy with all of the kids, so I decided to be very easy on myself. Past versions of me would have scoffed at this processed food, easy meal plan. Current me is beaming with success. 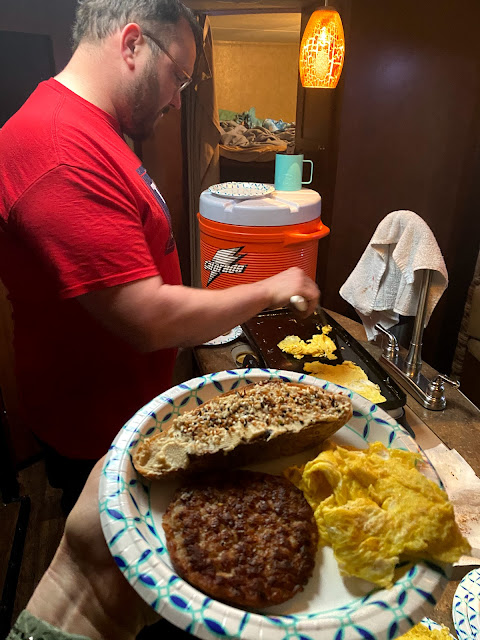 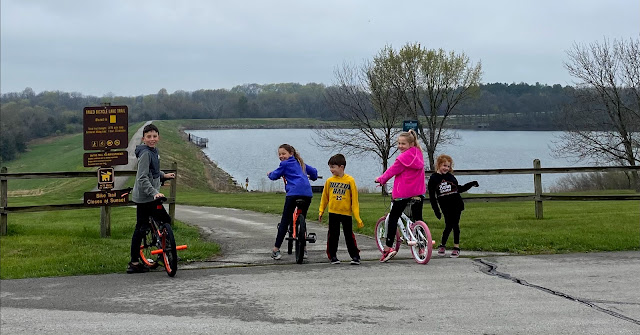 The state park has a lake with a 3.75 mile paved trail around it, which I thought sounded like the perfect way to spend the morning.
Others...who shall not be named...perhaps did not...but were troopers and tagged along anyways. Despite losing the big kids for a few minutes while waiting on the little kids to catch up, the first half was quite pleasant. Then, we found a creek with a stream and little water fall and the kids had so much fun playing in the water. 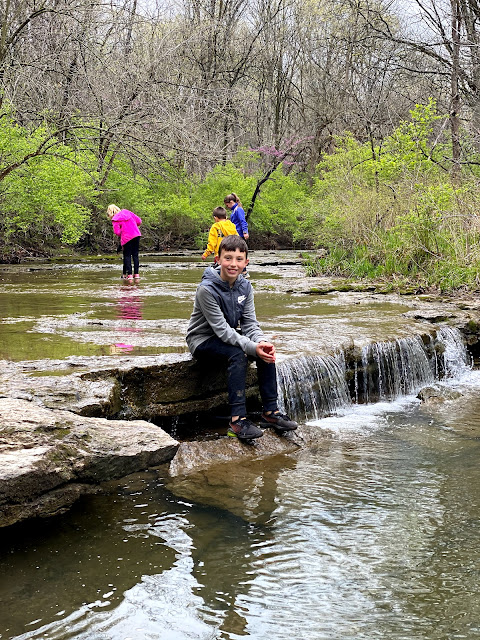 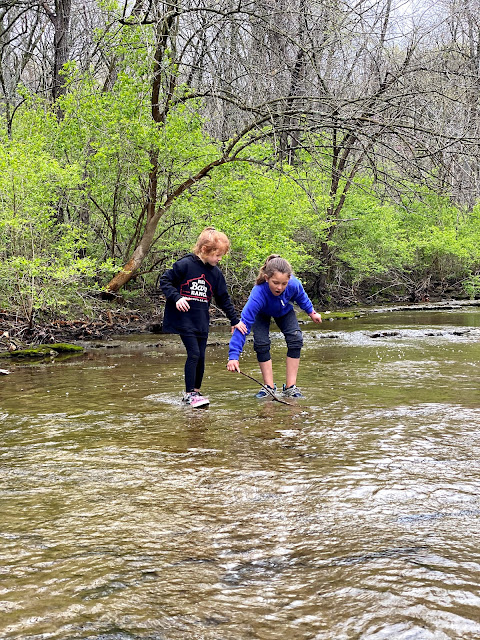 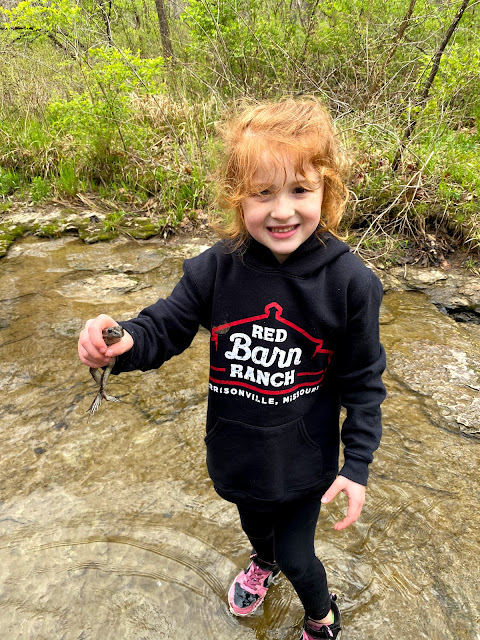 Maybe too much fun, because they didn't believe me when I warned them they would regret having wet shoes and clothes for the last two miles.
I really don't like being right, especially when poor Cora face planted on a slippery rock and was so thankful her sweet cousin Hallaway donated her fleece to keep her warm. The second half of the walk involved a lot of (understandable) whining and me carrying a sleeping Mira.
We made it back just in time for lunch and shelter to stay out of the afternoon rain. Then the kids found a creek behind our camper (that didn't require 4 miles of hiking) to play in for a few hours. They rounded off the night scootering/biking with some friends from church...who just happened to reserve the campsite next to us! 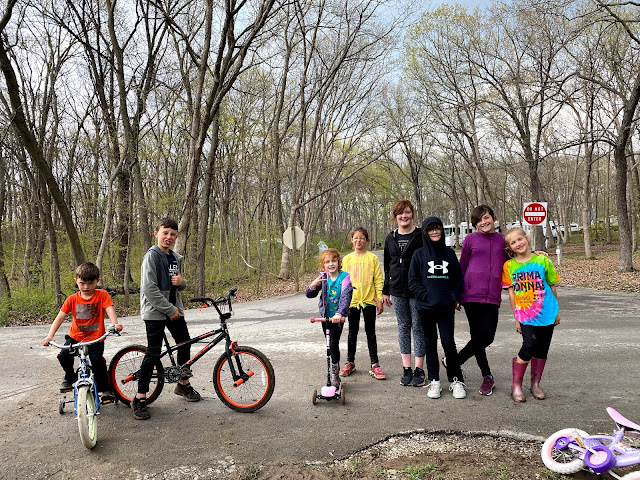 Three movies watched. I know we were camping and should have been enjoying the great outdoors the entire time...but it rained. There were six kids. We were tired.
The Boy Scouts camping in the tents next to us informed us the next morning that there were speakers on the outside of our camper too, blasting the sound of our movie. (I felt really bad about not realizing that feature.)
Two baby wipes, which Mira insisted on using as a shoe substitute after all three of the pairs we brought were unacceptably muddy and wet. She would grab the wipes with her toes and walk about the campsite. It was too hysterical to stop her from doing it. 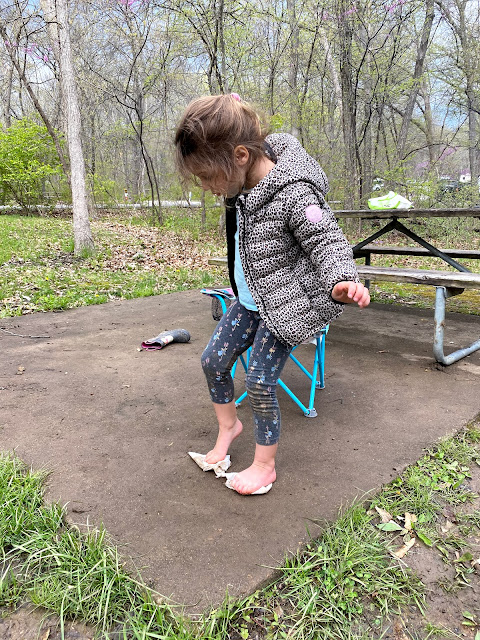 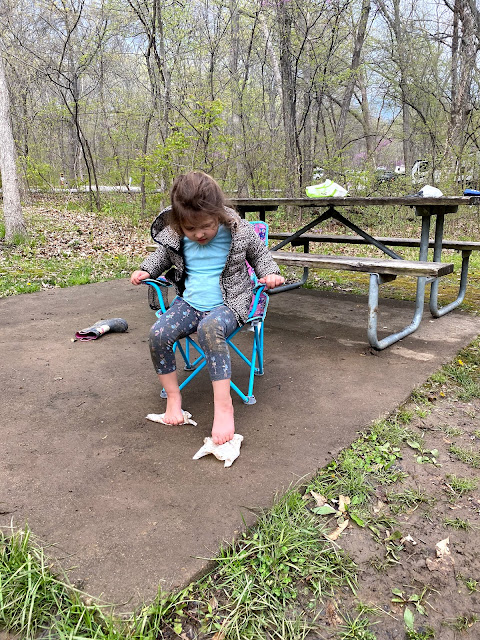 One fire built without matches or lighter fluid - just a flint stick (<-- great Father's Day gift!), wood shavings, and lots of blowing. In between the rain and the mud we found a window of time to build a fire and enjoy a few s'mores and the extra warmth. 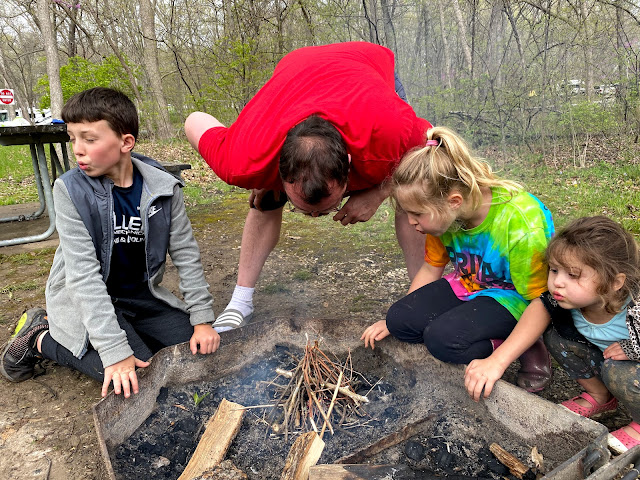 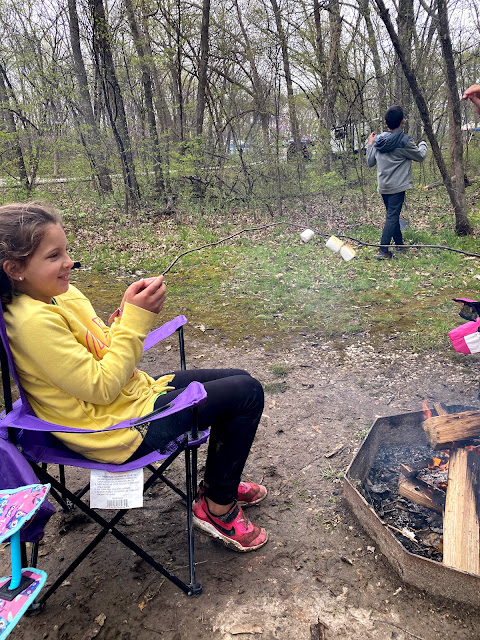 We came home in time to clean all the mud off and pack the camper up for our next weekend of fun. Currently researching our next destination. 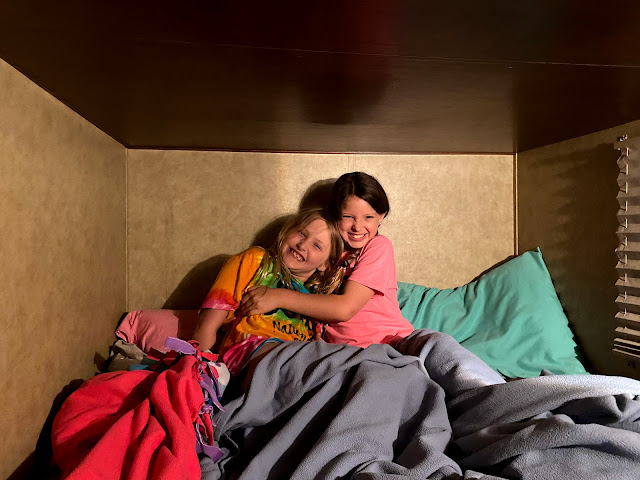 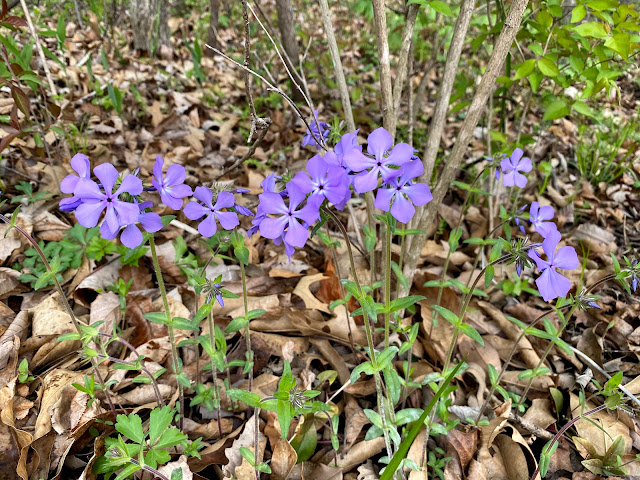 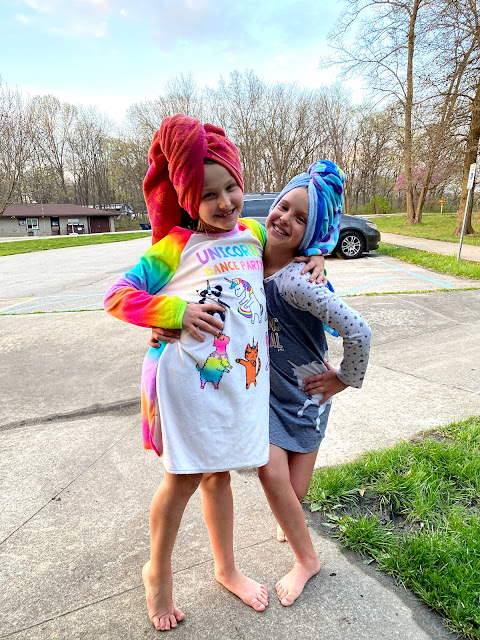