Hello and Happy Friday!
Although that first sentence may sound and look cheerful, my heart is heavy with what is (has) happening (happened) in our country this week (centuries). I will admit that my natural response to any conflict is to bury my head in the sand, but I understand that is not helpful to anyone. I am making an effort to listen and learn and be uncomfortable. Thank you for reading here and letting me continue to document my precious bubble of a life, which I have recognized as such more and more with every day.
Monday was Ina and Cora's first day of summer camp. This was the same camp I worked for in high school and college, so I was a little giddy dropping them off the first day. True to their natures, Ina gave me the peace sign and went to join her friends while Cora hesitantly clung to my leg until I convinced her she would have fun without me there. 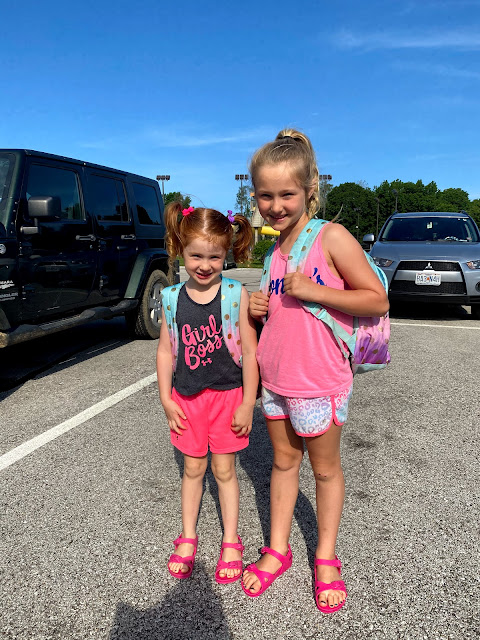 I picked them up after work and learned they had gained a few more freckles and a few more friends. Cora reported that she has a 'new BFF' whose name she couldn't quite recollect and Ina told me she traded the pretzels I packed for Spicy Doritos, that her favorite counselor was a guy named Vince because he was the most 'instructive' and that she was brave enough to go down the big slide at the pool.
Something I didn't anticipate was Mira waking up and yelling, "We're going to summer camp! I can't wait to go summer camping!" Poor girl has a few more years until she is old enough. Until then she gets to pick strawberries with Nonnie. 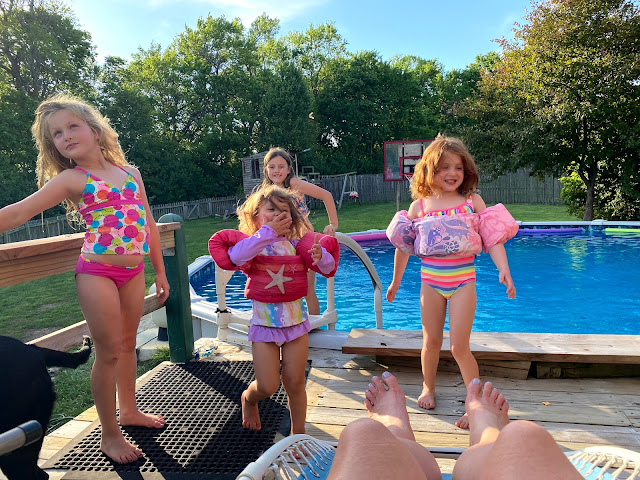 I have a feeling our new summer routine is set - dinner, swimming, listening to Harry Potter. 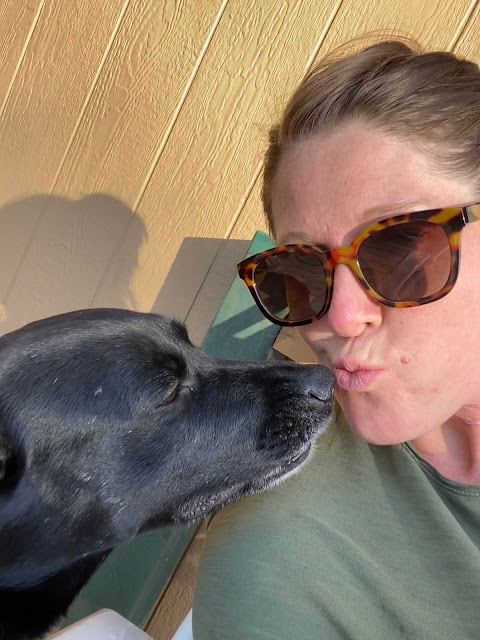 Lola has yet to jump in the pool, but she has come close a few times. Really, it is just a matter of time before it happens.
Tuesday I again picked up two red faced, tired, and very hungry campers. We came home, turned on the AC and a movie, and I cooked dinner for a few friends to celebrate Valerie's birthday. We ate cookie cake and watched the kids swim until the sun started going down. 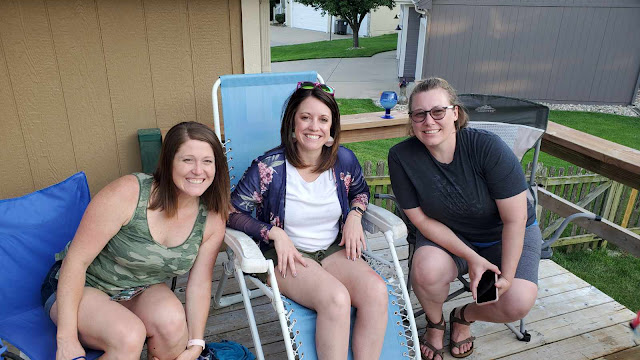 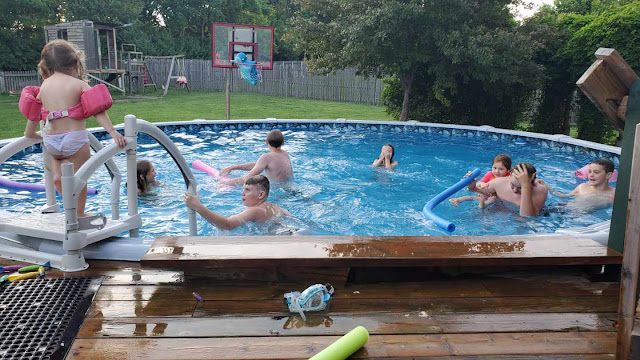 We didn't even make it through an entire chapter of Harry Potter we were so tired.
On Wednesday I squeezed in a long overdue hair cut and eyebrow wax before picking the girls up from camp, quickly chopping a salad, and heading to small group, which the Thomas Family graciously volunteered to host to celebrate Graham's retirement from the marine corps. 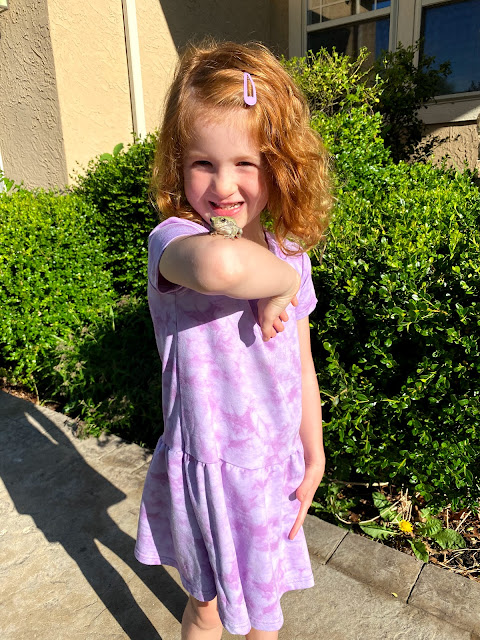 As we left Cora picked up a frog on the sidewalk. Nothing delights her more than holding a frog, and likewise, nothing upsets her more than losing a frog. Bless her heart, she lost that frog no less than 10 times in the van on the way home. I made the mistake of letting her keep the frog in a makeshift aquarium overnight, but after researching how to take care for the creature, the internet strongly suggested we let the wild frog free. 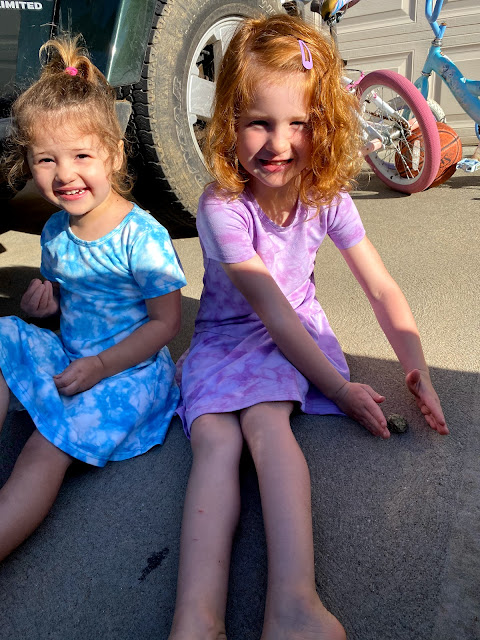 Cora was not happy with this at all and her heart broke into a million little pieces when she had to watch "Polly" hop away without following after it. She cried so hard through my patient explanation of how Polly was better off on his/her own. The only thing that stopped Cora from spending the day in tears was me mentioning the possibility of going to the pet store and getting a pet frog. A pet frog? Who am I? HALP.
Thursday night some neighbor friends came over to swim, we had steak and my favorite salad, and Ina had dance. When I picked her up she strutted to the car and confidently announced, "We have our dance DOWN. Miss Donna says we are professionals!" I think the extra socialization gave her a new found energy, because when it was time to go to bed she kept on saying, "My body is exhausted, but my mouth is energized! I have so much I want to talk about!" as she told me about wondering what goes through others' minds and asked me if I had any boyfriends before Daddy.
Whew! The girls are going to their Grandma's for the weekend and Dan and I are going to enjoy a little anniversary stay-cation. We have been married 12 years on Sunday! I am so looking forward to the next 48 hours.
Have a great weekend!
Recipes:
Korean beef bowls - seriously love this recipe
Grilled chicken with Peruvian green sauce - another Kendrick family staple
Kale Cesar salad with this dressing recipe and roasted chickpeas
Posted by Racheal at Friday, June 05, 2020