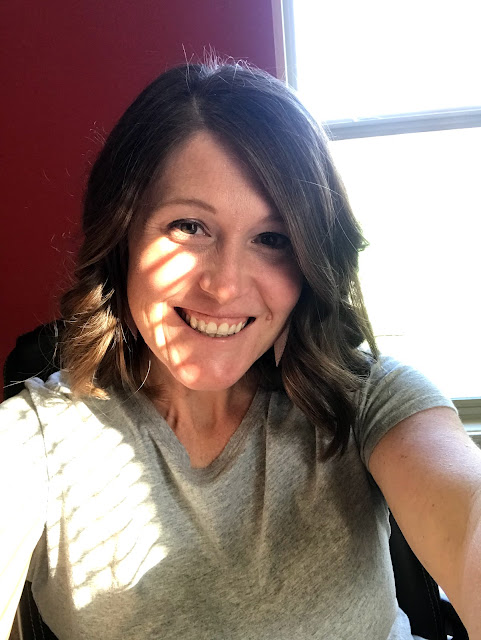 (I curled my hair and felt it should be documented.)

Here we are, another week of the majority of our relationship building needs being under-filled with Zoom Meetings, YouTube Videos, and Facebook/Instagram stalking. Sorry, I didn't mean to start this post off so negative, because I know I have absolutely nothing to complain about. Dan and I both have our jobs. My loved ones are healthy. I have food and childcare and every little thing I need, with the exception of social interaction that doesn't involve a screen or the tiny humans that live in my house. 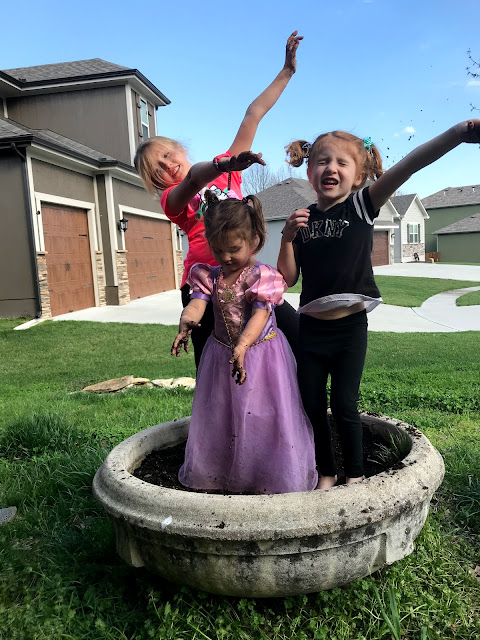 So, let's start over. Here we are, another week of having the opportunity to spend even more time together as a family! 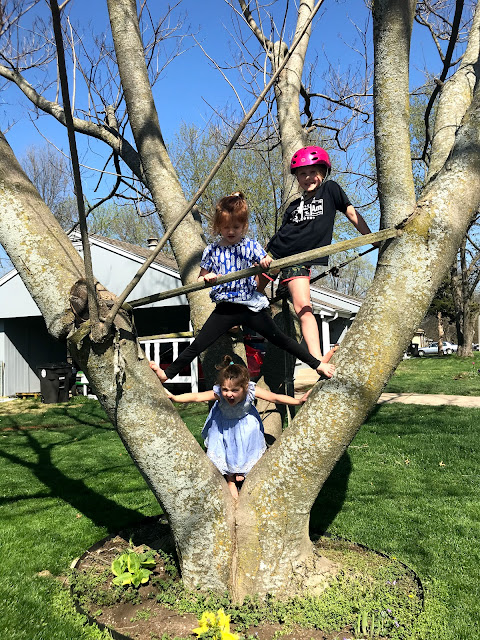 And together we have been. The day I found out school was cancelled for at least a month (and then beyond) I stood in the kitchen and listened to the girls arguing with each other about every single little silly thing and had serious doubts we would all survive this month. I am happy to report that a few weeks later, although the the growing pains were rough, the girls are doing a great job of being each others' playmates despite differences in age, toy supply and demand, and movie preference. Of course they still argue, but they also have huge chunks of time when they play together in the toy room without adult guidance or intervention. Honestly, they seem to have the most fun when they "wrestle." Yep, who knew that my three princess dress wearing daughters would pass their stay at home time rolling on the ground together?

Have I mentioned that Dan purchased a camper? 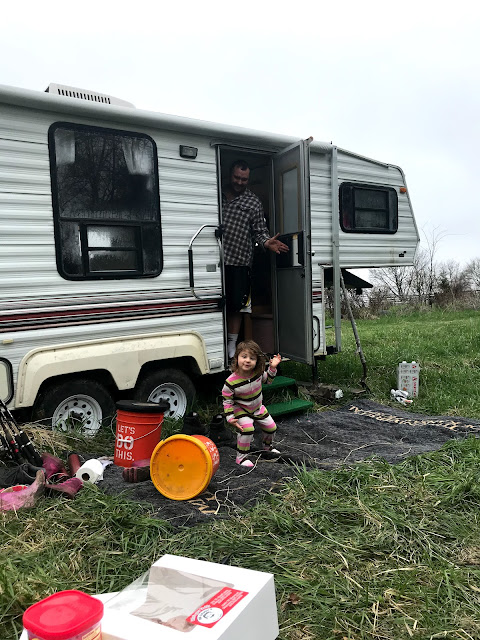 I say "Dan" and not "we" because I didn't know about this transaction until it was complete. Apparently these desperate times call for quick decisions to be made in the area of alternative living situations.

Our new pride and joy is parked on my family's farmland, ready and waiting, with no running water or electricity.

The girls, who have been begging for a "camping thing" for years, were beyond elated and begged to go camping the minute they saw it. I promised them and Dan we could go as soon as we finished  painting the living room, which just happened to coincide with Dan's 35th birthday. 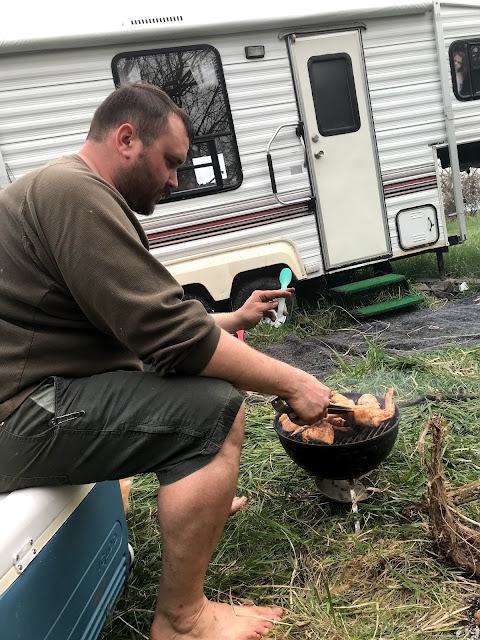 On Saturday morning Dan and the girls packed their clothes and left early while I worked, then I packed up some healthy(ish) food and headed down around lunch time. Considering this was the first time they have packed for such an event, they did a decent job. Mira only had one pair of shoes, which she poured water in during the drive down, Cora only had one shirt, and the only socks to be found were two singles (one of Ina's, one of Mira's). When I told Dan there wasn't anything for Cora to wear, he actually replied, "Yes, there is. Look at how many pink things are left in the suitcase." 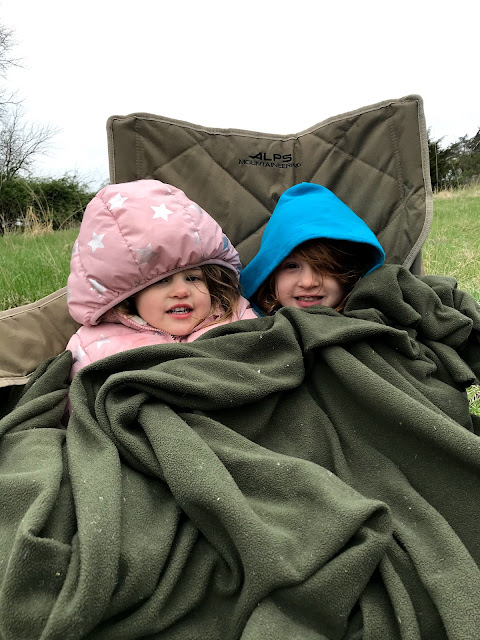 It turns out that socks are only required if you are a wussy (me) when camping in near freezing temperatures, as the rest of my family went barefoot the majority of the time. 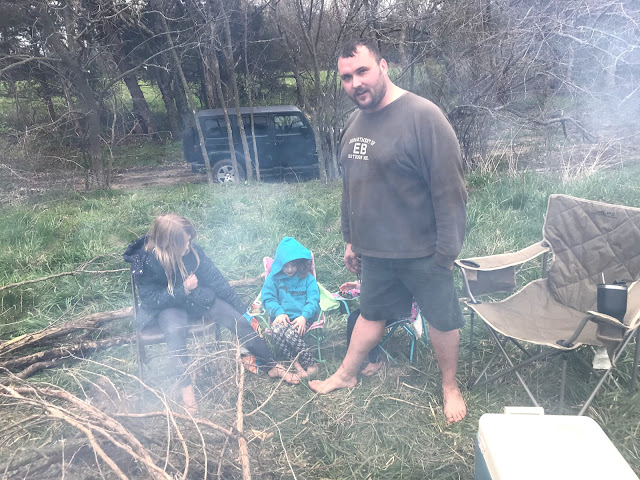 I have to admit that when I sat down next to the fire, shivering within the first 15 minutes of being there, I was less than enthusiastic about sleeping in the cold and may have been a touch pouty. It didn't take Dan any time to say in the nicest way possible, "This is my birthday and I want to have fun. If you don't want to be here, you can leave."

After hearing that I put on a second layer of my big girl pants, ignored the cold, and joined my family in having a lot of fun.

We walked through the timber (where my family has had weenie roasts since I can remember) to the creek (where I played as a kid) and Ina sang, "We're lost in a field of thoooorrrrnnnns!" 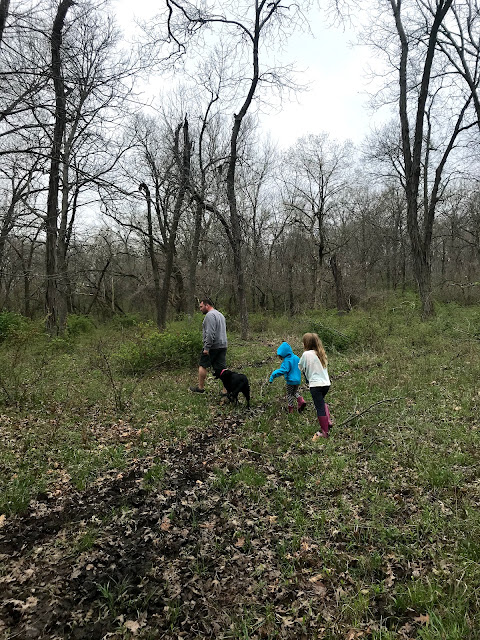 We drove around and oinked at pigs and moo-ed at cows. 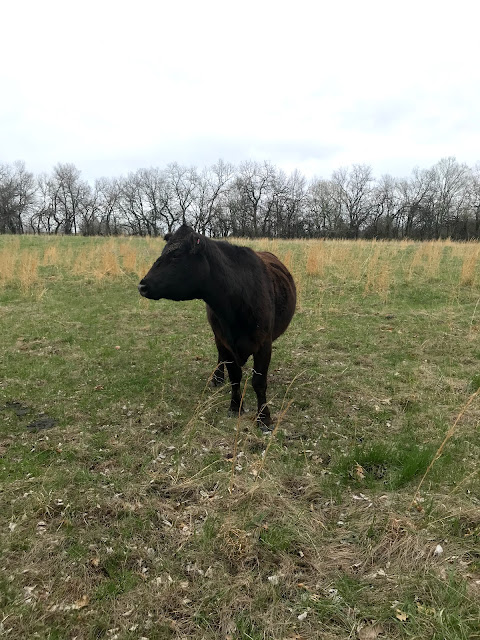 We sat by the fire singing and talking, grilling up frozen pizzas (Dan's birthday meal request), smore's, and hot dogs.

We played cards - Ina is becoming quite the Spades player and I don't want to admit how many times she set me. 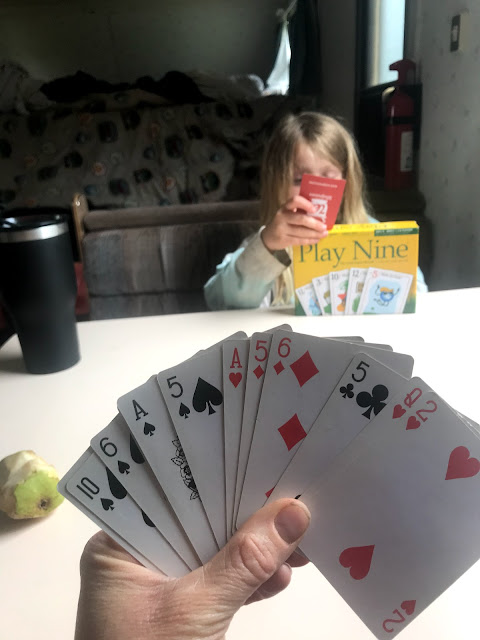 We went dug for worms and went fishing. 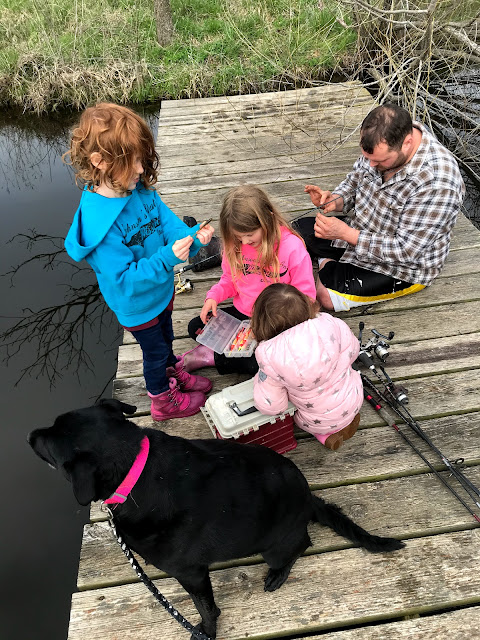 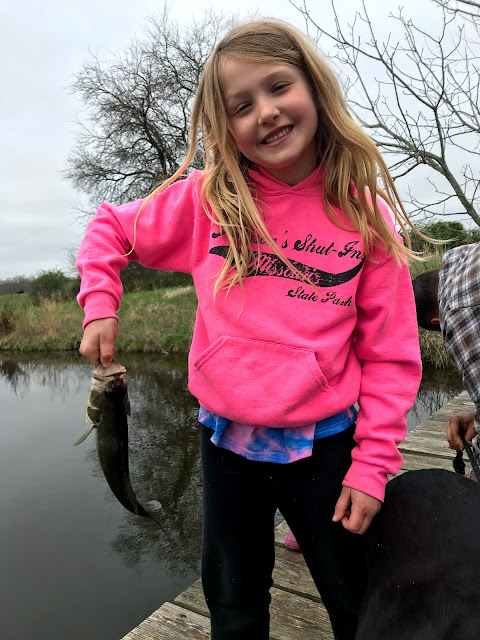 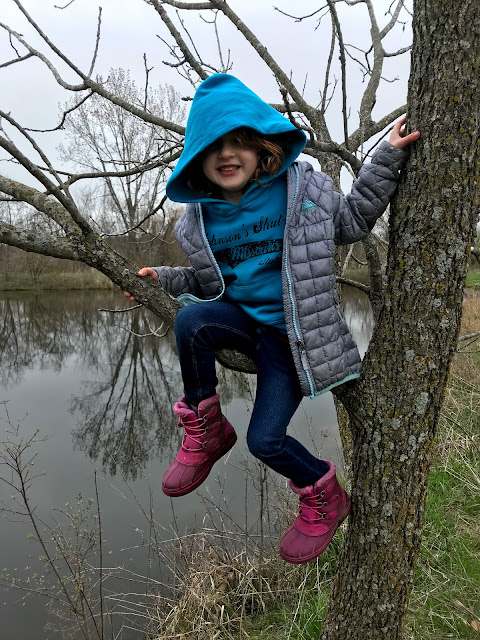 We finished the 24 hours off with go-kart riding. 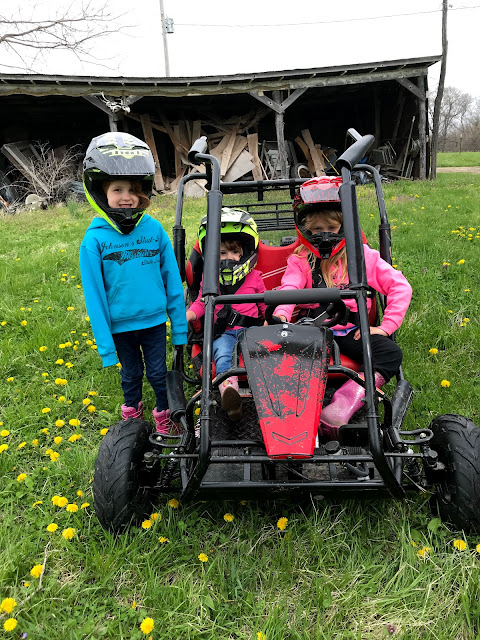 While I did change my attitude, I have to disclose that during the first hour on Sunday morning, after sleeping on a slight tilt with 5 people in 20 squared feet, I sat in the van listening to my audio book, drinking the iced coffee I had packed, and taking full advantage of the heated seats. (Side note: if you have not read Educated you should. It is a masterpiece of a book.) 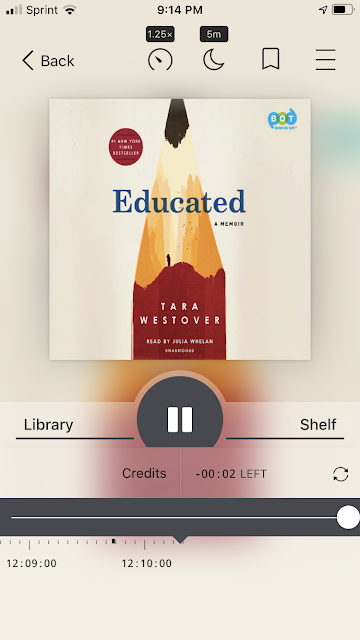 Even though a full work week has passed since going camping, I don't have many specifics to report. I am learning a new program/application at work. I have homework again, which is right in line with the girls. (Ina came in my office when I was messing with these plots and I taught her what a concentration versus time curve was. Home school: check.) 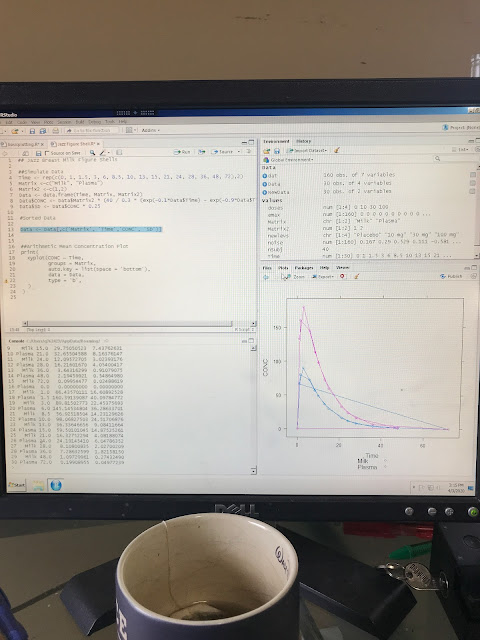 Our walls have a little more paint on them. 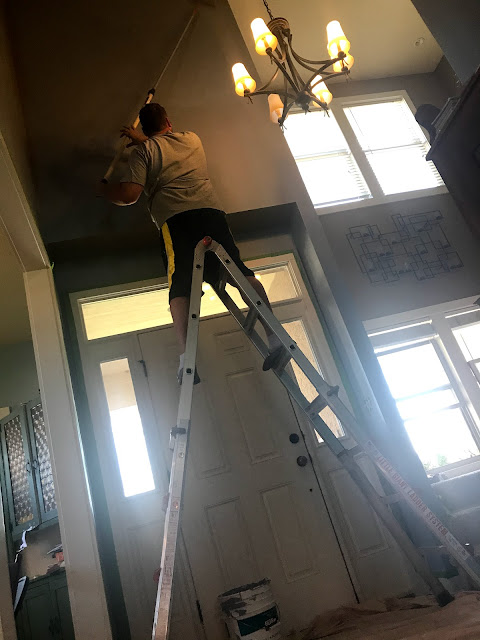 The girls continue to have Zoom meetings for school, dance, and small group. I continue to be beyond grateful for my mother-in-law, who is making this season possible for us. 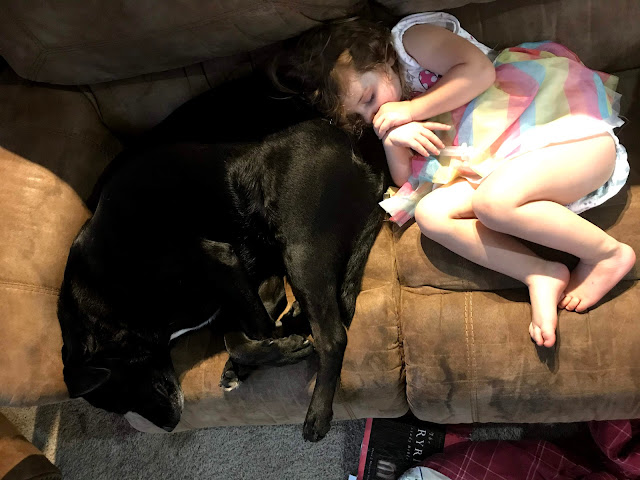 I have been going on very long walks. They keep me sane and I love them.

Inspired by a Facetime with my sister and neice, Ina and I did fun "science experiment.". Behold, our rainbow in a jar, which only took 5 tries. 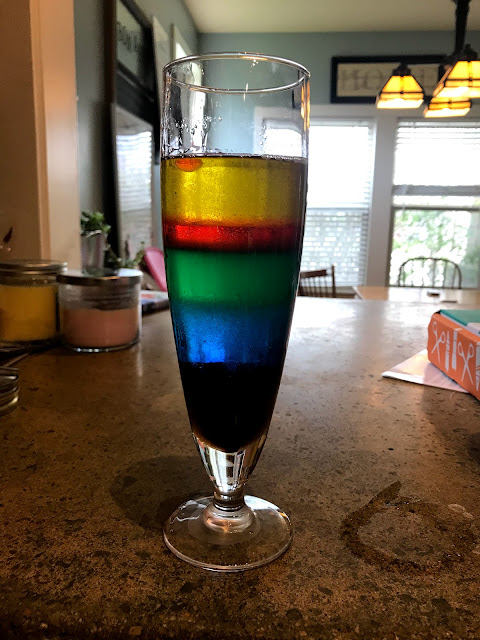 I bottled my kombucha and started a new fermentation. 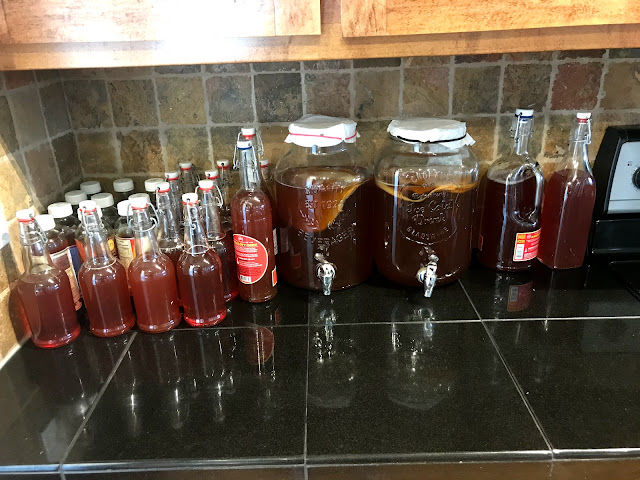 Some recipes we loved this week: 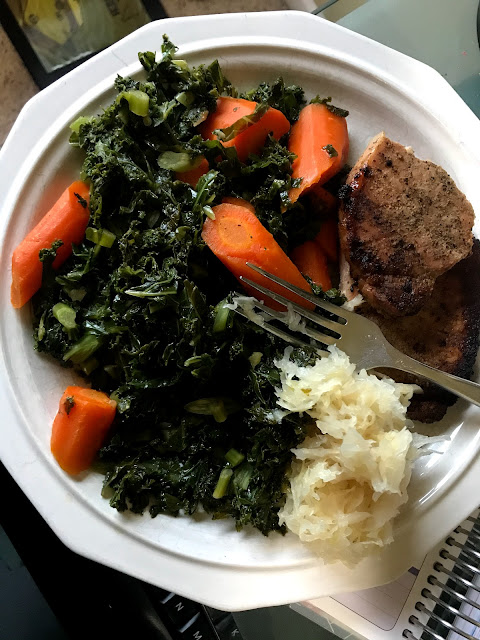