Behold, the only picture taken of me all week by Cora, the expert photographer. 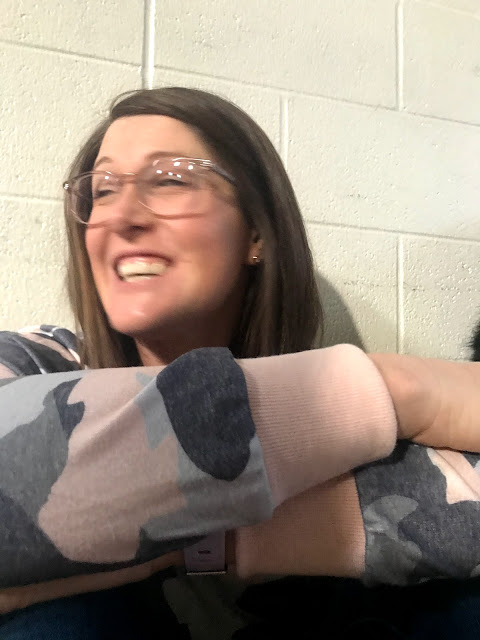 There are many things to be said about last week, but at the top of the list is the fact that I checked off every single box in my planner...until Saturday, when instead of cleaning the back yard and prepping food for the week, Dan and I fought for 4 hours instead. 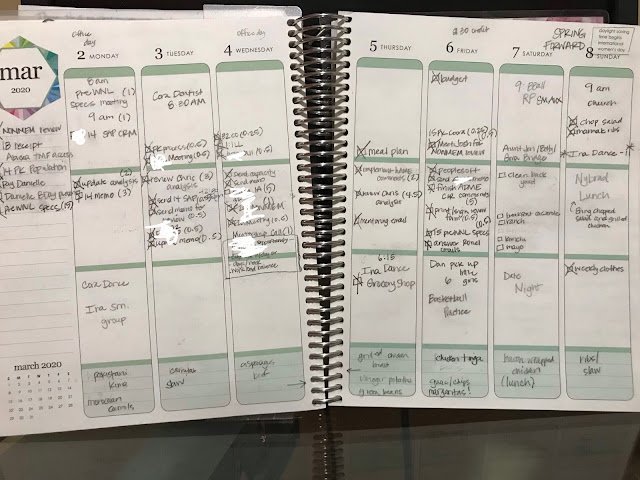 We know better, and once again I am saying this not to bash on my husband but to clearly say that life isn't always perfect, even if every box is checked.

We still managed to somewhat enjoy a date night with mediocre fajitas on Saturday night while my mom graciously stayed with the kids. 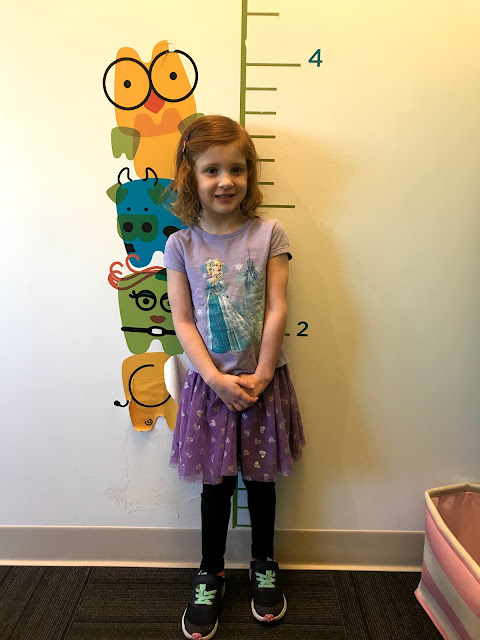 Rewind to earlier in the week when Cora had her first dentist appointment in two years (seriously, I'm killing it as a mom). As she calmly sat there in the chair, letting them poke around in her mouth and giggled when the sucking straw "tickled her" I couldn't believe how much she had grown from the two years earlier when keeping her in the chair was very similar to caging a wild animal.

Wednesday we had to cancel small group, yet again, because Mira still had a fever. Thankfully, Wednesday was the last day and our house been fever free since. We have used the extra down family time to watched The Mandalorian which only further secured our family's obsession with Star Wars.

Thursday I grocery shopped, and am regretting not adding more bags of kale to my cart, in the low chance of a quarantine, these are the (admittedly, ridiculous) things I worry about.

Friday I drove Ina to basketball practice where she literally laid down on the court while she was the man out. Maybe she was still tired from being sick or maybe she doesn't like basketball as much as I want her to. Time will tell.

Saturday morning Ina's team won a nail biting game, to which Ina contributed much spirit, cheers, and smiles but little/no baskets, rebounds, passes, forced turnovers,etc. On the way home I told her we were going to do some chores and she moaned saying, "Ugh! I have already won a basketball game today. What more do you want from me?!?"

While we are on the topic of funny things my kids say, I picked Cora up from school yesterday and she was so excited to show me the surprise she had made for me and Dan. 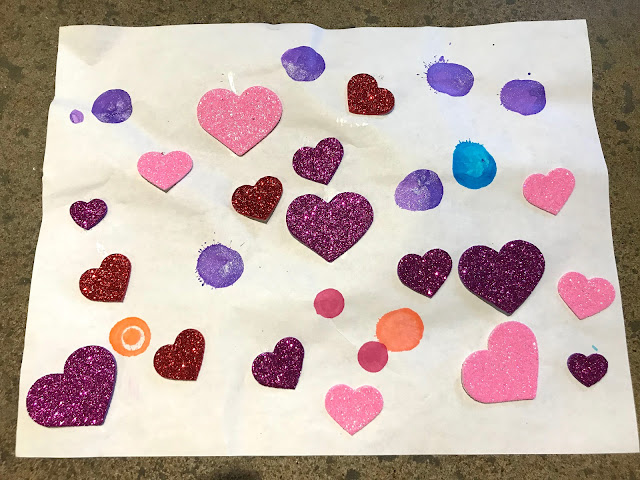 Cora: Mom, I made you and Daddy a gift. But you have to share.
Me: OK, I can share.
Cora: Actually, you can just have it, because Daddy farts.

This is right in line with Mira, who has taken to calling everyone a "poopy face" or a "chicken butt" and although I know I should strongly discourage this language, and I totally would have with Ina or Cora, I just can't help but giggle when she says it, which of course only reinforces the behavior. Dan and I have even lovingly started calling each other either name as a term of endearment.

After church on Sunday, Dan and I started up the grill and then dropped Ina off at dance and then hurried to prep some food, then picked Ina up from dance with the rest of the family to join our friends for lunch and fellowship outside, enjoying the beautiful weather. 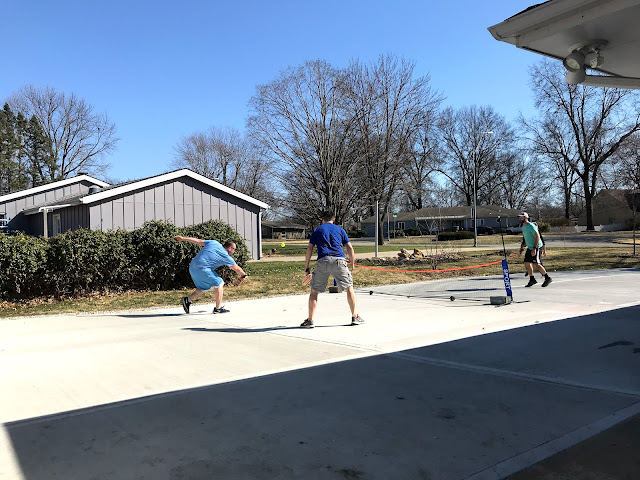 This was the kind of afternoon that recharges the soul. The kids played outside while the moms chatted and the boys had hair cuts, played pickle ball, and hung out in the shed. Ladies and gentlemen, the dark days of winter are officially behind us. Hallelujah! 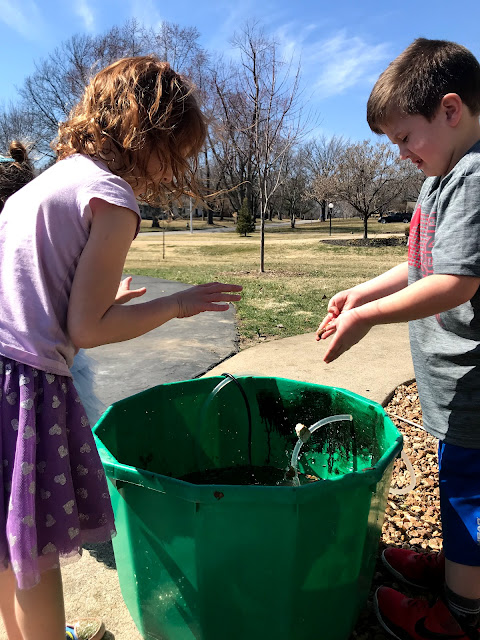 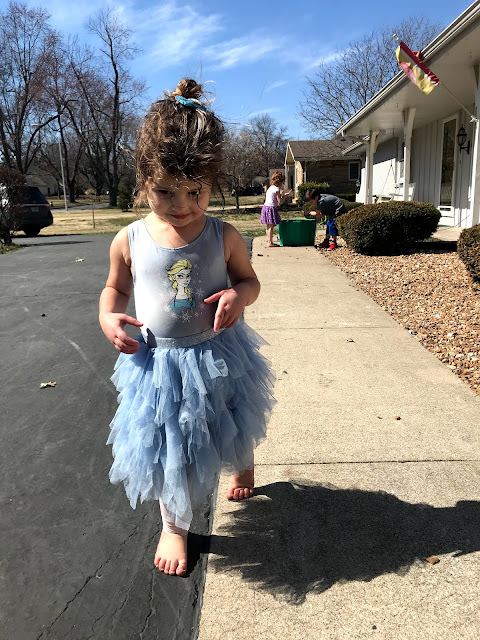 Ina's school music spring performance was last night. She has been talking about this for weeks and was so proud to be banging on those drums and singing her heart out. She was particularly pumped about the "surprise" in the last song when they were singing about the "colors of the Earth" and every kid whipped out a different color handkerchief to sway around. I was pretty impressed that all 80 first graders had the self control to keep those contained for the previous 15 minutes. 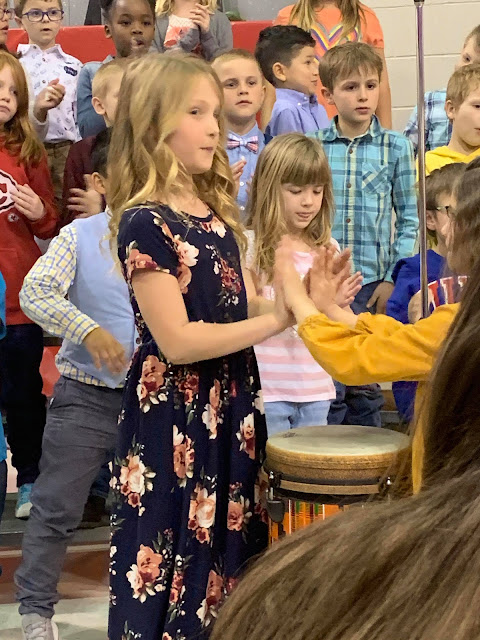 The Whole30/Paleo movement is still going strong in my house. Here are some recipes we made this week:

Pakistani Kima: delicious, but I would not make it with green beans again. 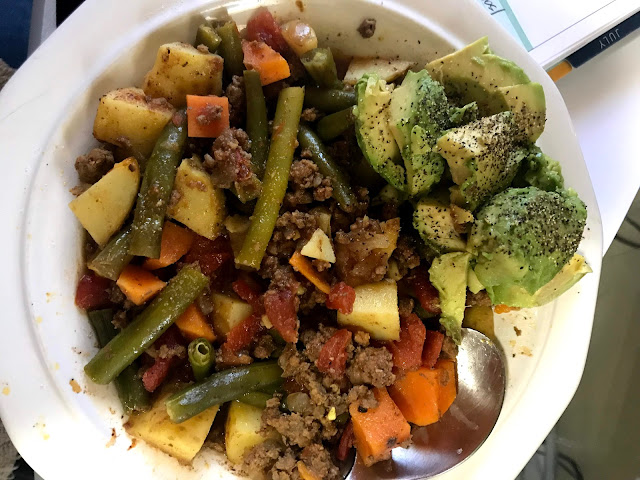 Carnitas, slaw, pickled carrots, and pineapple cucumber salsa - these carnitas are melt in your mouth amazing 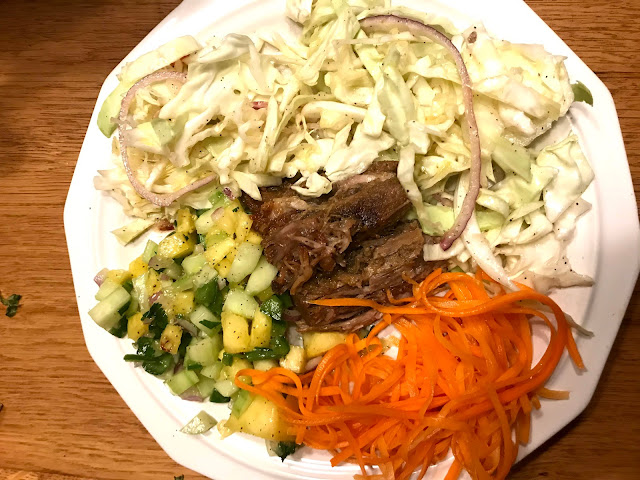 Chicken Tinga - from Nom Nom Paleo: Food for Humans cookbook, eating in the van on top of a baked potato during Ina's basketball practice. 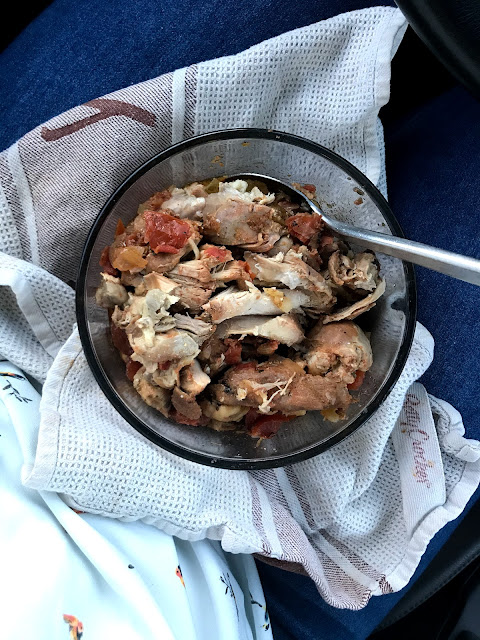 Bacon wrapped chicken thighs with a lemon date sauce, citrus brussels sprouts salad - both from Nom Nom Paleo: Ready or Not. I have both of Michelle's cookbooks checked out from the library (until the ordered ones come in) and I have to admit I have become slightly obsessed with her. She is a pharmacist who loves her family and food. She is my hero. Sadly, there are no pictures of this delicious meal, but many of my family members can vouch for it's deliciousness.

Korean ribs and slaw. These were just as amazing the second time around and although they take a long time to cook, most of it is completely hands off- my kind of perfect Sunday evening meal.

Asparagus/bacon/egg salad - so so yummy.

This is the last week before spring break, which seems way too early. We have lots of things to look forward to! Have a good week!
Posted by Racheal at Tuesday, March 10, 2020