Cora has taken to telling me lately, "My hair isn't red. It is golden brown." 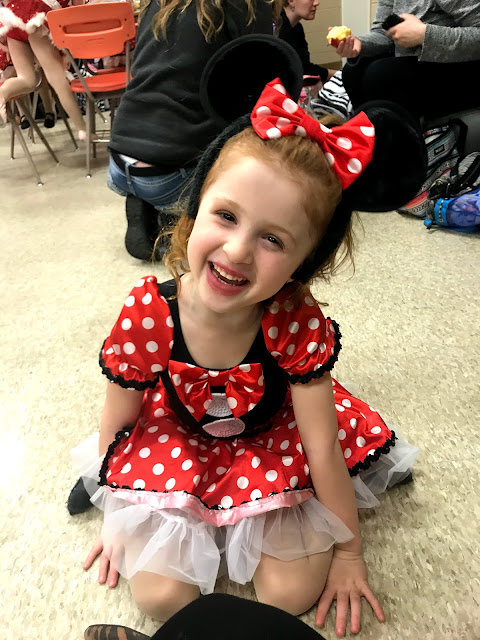 I hope this isn't a sign she is starting to dislike her hair, because its fiery brightness and her matching personality are my absolute favorite things about my favorite middle child.

Also, just to document a few other things she has said lately:

"Mom, where do you think we can buy Frosty's magic hat? I want one!"


"We have to get a new baby because Mira is going to live with Nonnie. He will be in your belly and I will name him Jesus."


Since we last talked I joined my friend Brooke as her +1 for her company's ugly sweater Christmas party because her husband was out of town. They played a fun murder mystery game to start the party off, which I found quite entertaining. 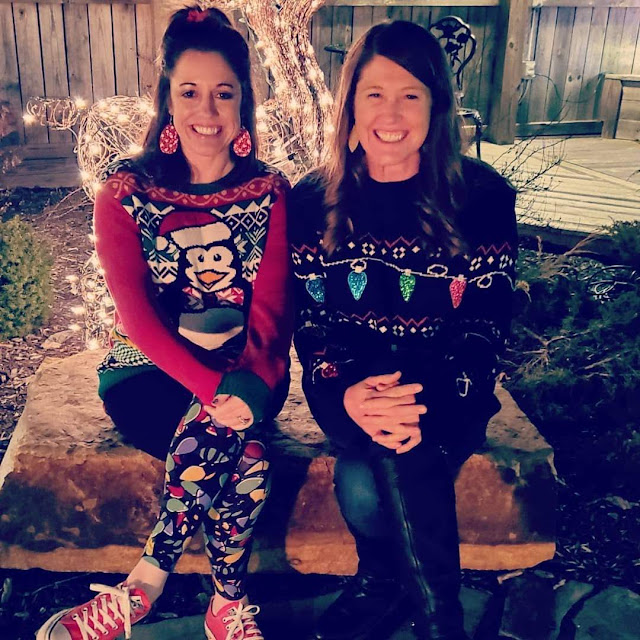 While I was gone Dan and the girls lived their best lives by eating pizza rolls for dinner and watching Robin Hood on Disney+.

Then Saturday was Ina and Cora's (5 hour) Christmas dance recital rehearsal for the real deal on Sunday. 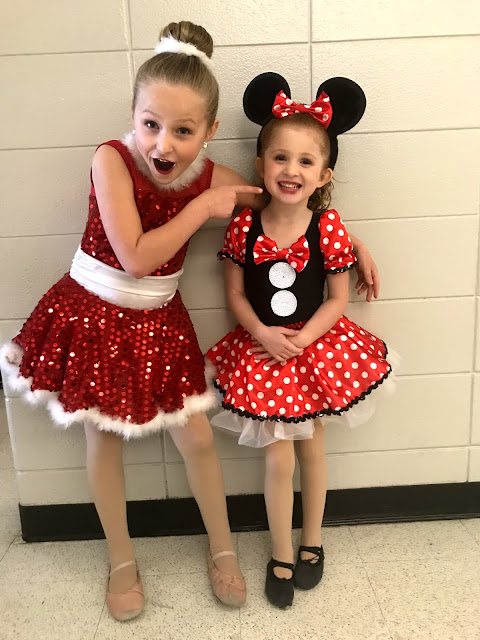 Ina is practically a pro by now and required almost zero help/supervision/make up touch-ups from me after her initial visit to "Momma's Boutique." 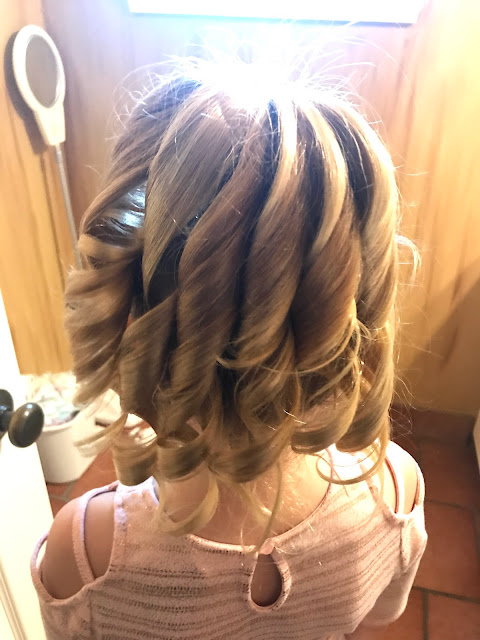 They both don't like having their hair done, so I blasted some Christmas music in my bathroom, let them touch all of my make up that is typically off limits, and told them they could pick out their eye shadow color.

Cora did a great job for the first dance and her desire to return on stage drastically declined with each additional four occurrences. 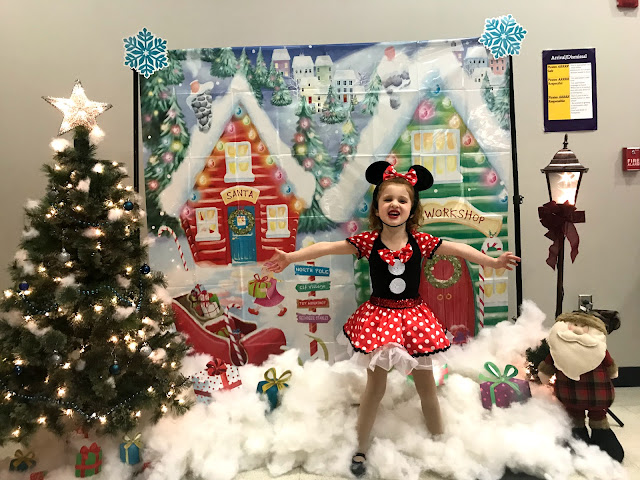 There were minimal tears and candy bribes, which I consider a win compared to last year. 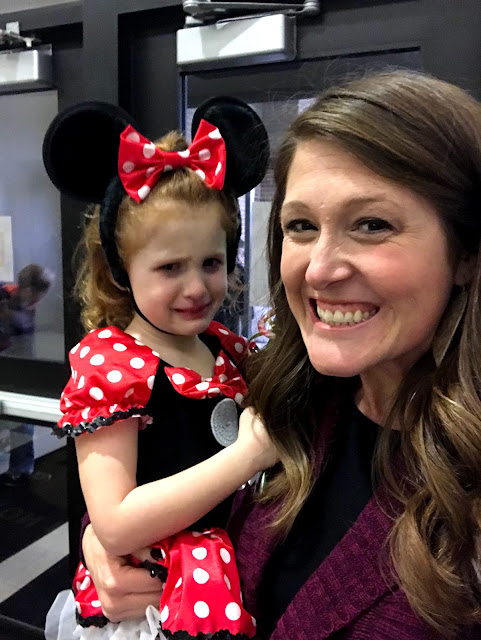 Unfortunately, I did sort of talk back to/argue with another dance mom, but two seconds later ran back to apologize profusely. Over and over again. I might try to call her today just to make sure she believes I am sorry. Who am I?

Ina's class sang and danced to Jingle Bell Rock and then had a short appearance in the closing number. 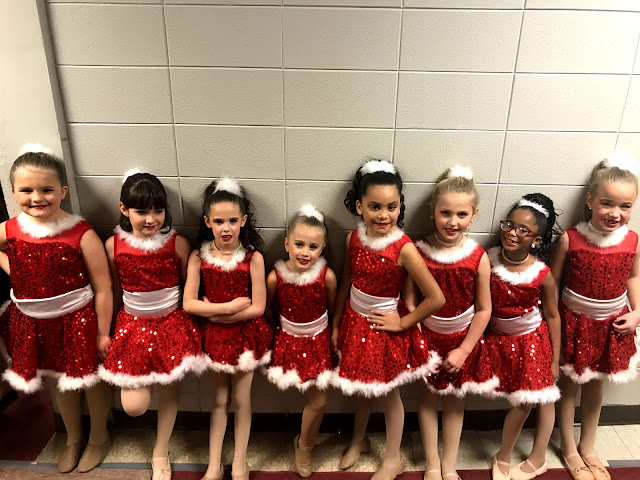 Cora's class danced to a Mickey Mouse version of Jingle Bells and were the cutest when they each had the own set of bells to shake around. 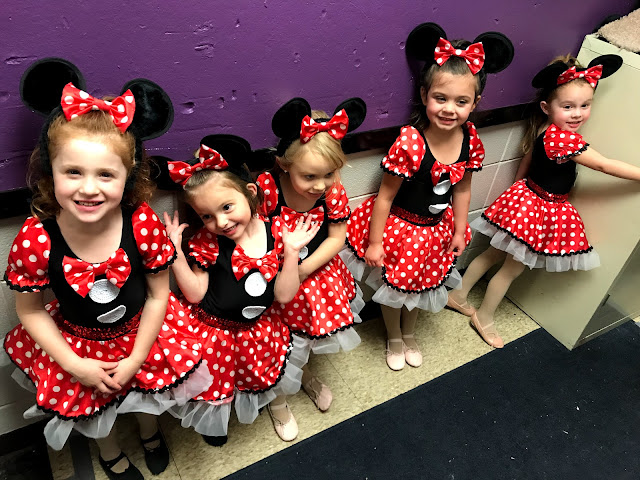 Ina and Cora were most excited to see all of our friends and family who came to watch them sing and dance. Ten years ago, if you would have told me that my dad, brother, and grandpa would sit through a dance recital, I would have laughed until I cried, but I am so thankful to say they attend multiple of these things a year. 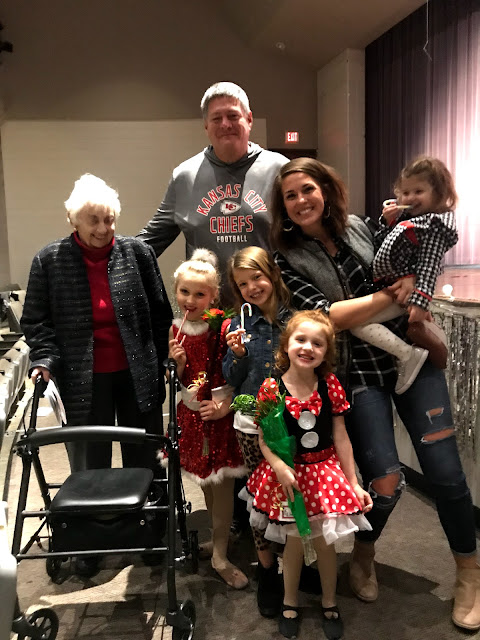 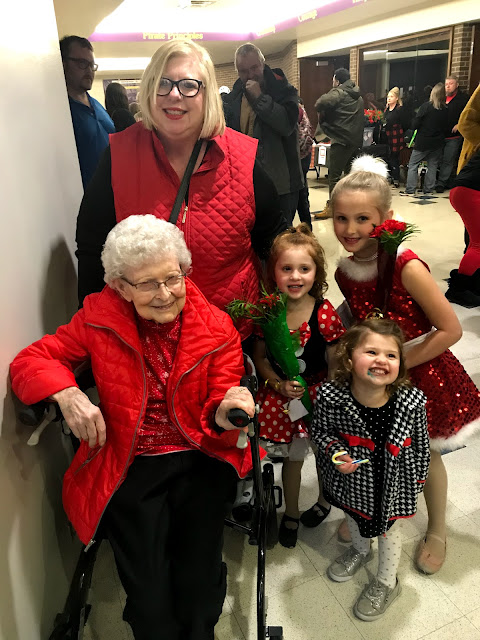 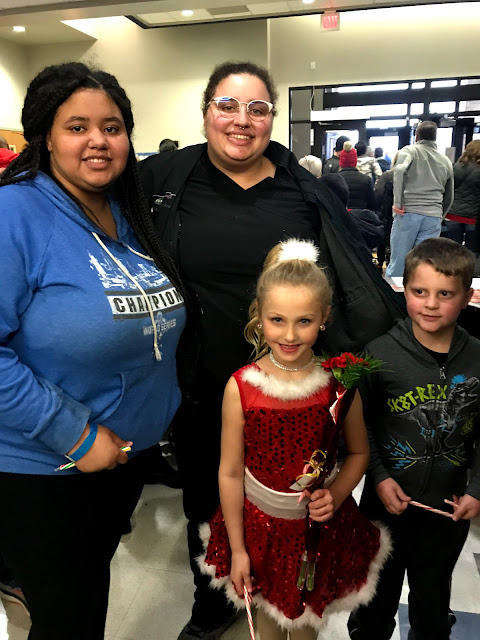 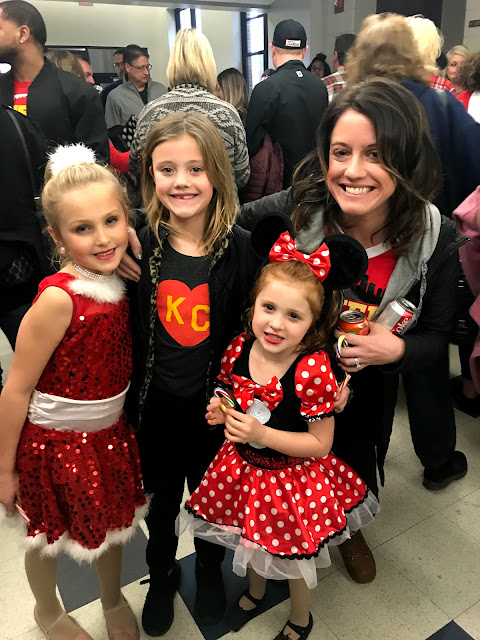 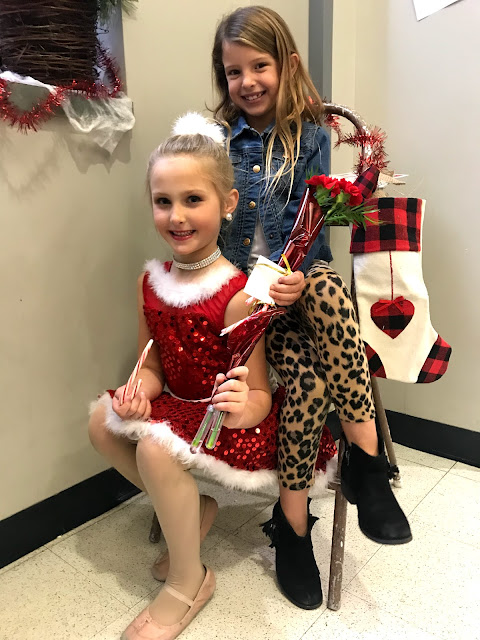 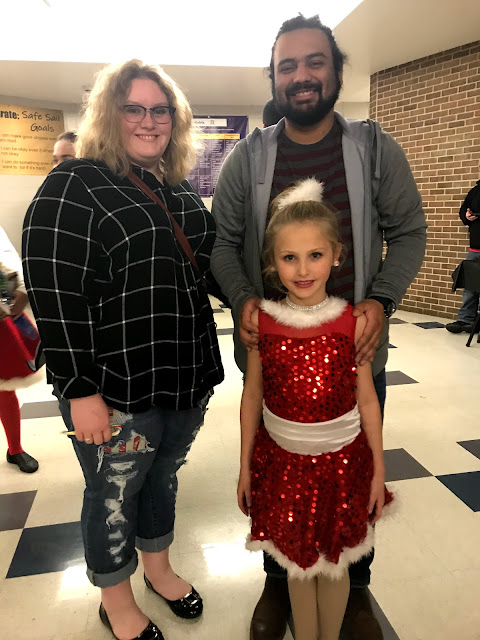 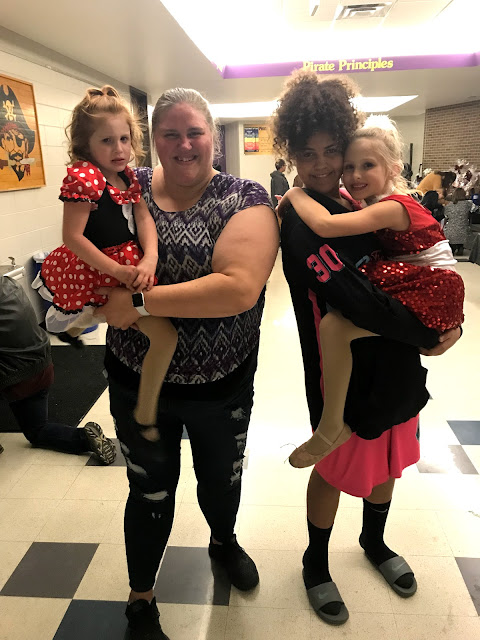 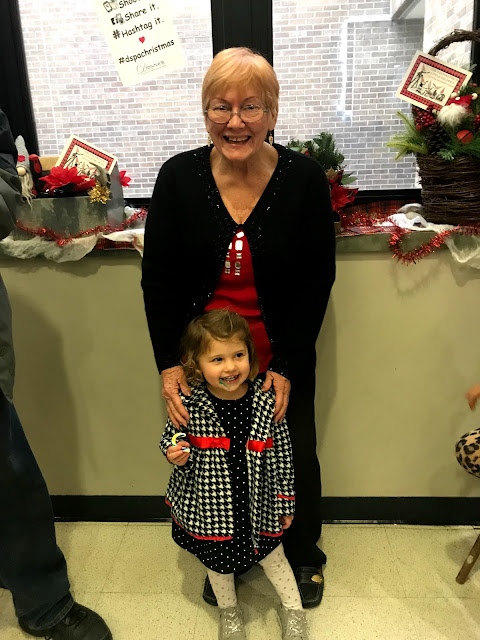 When Ina's kindergarten teacher (from last year!) walked through the door, I ran backstage to tell Ina, who gushed with excitement over and over again. I have always been so thankful for teachers, but I had no idea how much more thankful I would be when I see them loving on my babies like they were their own. 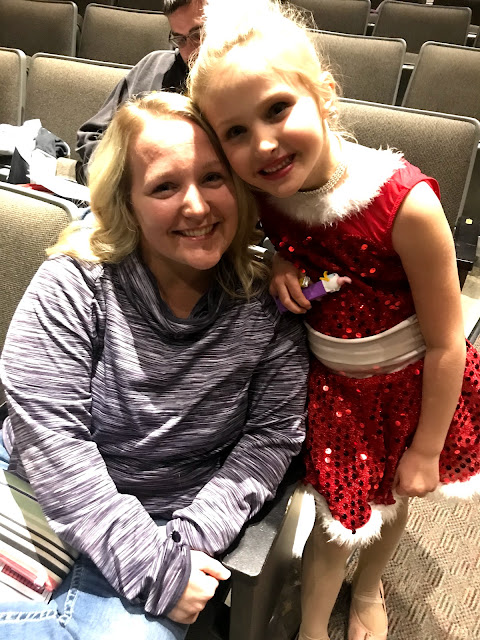 After the first show a few friends and family stopped by the house in between shows for some of Dan's chili and watching thirty minutes of the Chiefs game before it was time to head back and do it all over again.

Once again I am continued to be blown away with gratitude for our village and the love and support that surround our family.

Monday night I went with some friends to a wine dinner, which was more than fabulous. 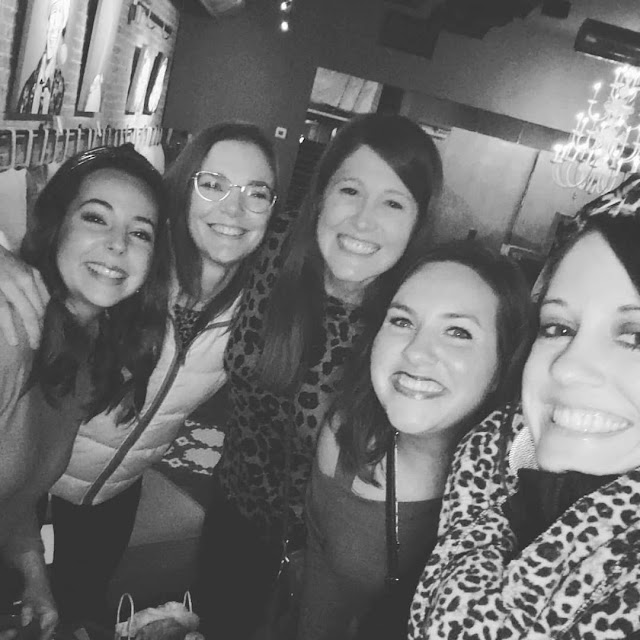 Each course was paired with delicious wine and my favorite by far was the roasted mushroom lemon couscous salad. I will be trying to recreate that dish ASAP. I also met some new people and enjoyed the adult female conversation. 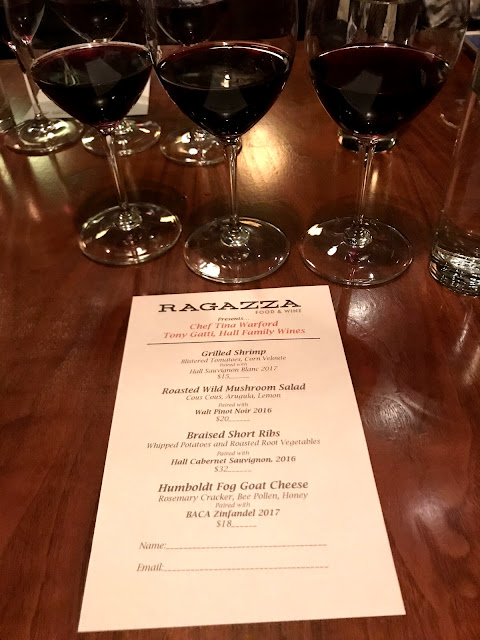 While I was "out gallivanting" (as Dan likes to say), Cora had her last dance class of the season and Ina started her first ever basketball practice. When my saint of a sister said she was coaching Hallaway's 1st and 2nd grade team, we immediately signed Ina up. Never mind the fact that practice is 40 minutes away from home and we don't really have any free nights on our calendar. Time will be created and dinners will be eaten in the car for the opportunity to see Ina play with her cousin.

I woke up this morning with last night's makeup still on and earrings still in after only a few hours of sleep and slowly made my way through this morning's workout at the gym. Sometimes something is better than nothing.

I have spent a lot of time away from home being out with friends or transporting children and my house is a little worse for the wear. But, I have to get my life together because things are happening this weekend. We have some family coming from out of town this weekend, three Christmas parties to attend, and the little girls sing in church, so lots of things to look forward to. I hope you are enjoying your December!

A recipe to try: Creamy Tortellini Soup - so rich and past-y, but one bowl is all you need to be so happy you made it.