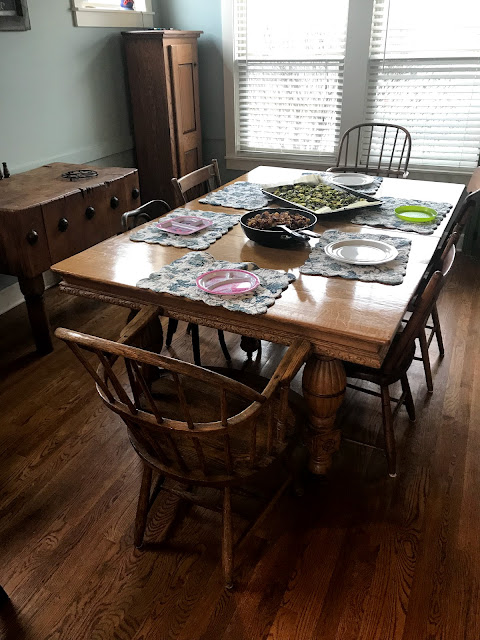 This past weekend after I had worked and Dan returned home from a church conference and Mira had refused to nap, but Cora, who doesn't usually nap on the weekends, had fallen asleep on my lap, we went against our usual stay-at-home-mentality and decided to go antiquing.

We were on a mission to find chairs to go around my grandparents' dining room table. The chairs my grandparents had were cane on the bottom and I knew from multiple unfortunate personal childhood experiences that cane bottomed chairs and kids don't mix well. We had searched the internet for sets of six chairs, but nothing looked right. Nothing felt right. Dan had the idea to have miss-matching chairs, but I was incredibly hesitant. I like for things to match and just any old chairs wouldn't work for such a special table.

After looking in ten stores, we were just about to give up and go home, when in the far back corner of the last store, Ina found five different chairs all right next to each other. Cora picked a small one with a heart shaped rounded top and Ina picked another slightly larger one with a violin shaped middle. Dan and I approved two more that had arm rests and lots of relaxing potential with excited nods.

My grandparents' table has been through too many family memories to count. It has stretched to 16 feet with 7 leaves and sat nearly 30 people for huge family Christmas dinners when we sang The Twelve Days of Christmas, covered it with parchment paper, and dumped huge pans of boiled shrimp, corn, sausage, and potatoes down for feasting. It was shrunk down short for my baby shower, just holding cake and punch to allow for more people to stand around it. It stood the test of Cramer card games, cousins hide and seek, and multiple gift wrappings.

Knowing that the table isn't in my grandparents' house and doesn't have my grandma's dishes on it absolutely breaks my heart and I almost didn't want it. Couldn't want it. The only place it belongs is sitting on top of golden-rod carpet, covered with a freshly ironed table cloth, matching dishes and serving plates, with platters of food from end to end.

When grandma and grandpa could no longer stay in their house, each of the grandchildren picked out one item. My grandma's chopping block was my obvious first choice. It is a beast of a thing that sat in the middle of her already crammed kitchen and held her knives, my grandpa's water cup, and any ingredients or utensils that were going to be used that day. It represented so many feelings and memories of the place I so loved. I was happy with my choice and thought it was enough. Things are just things, right?

But then the thought of their huge table being in someone else's house seemed impossible and with just one phone call, days before the auction, my dad made it mine. Ours.

Since then, the table has been sitting in my garage, wrapped and protected, as I tried to face the reality of bringing it into my dining room. Of it sitting anywhere else other than in my grandma's dining room where she made sure that everyone ate more than their fill.

To be honest, their house and many of its contents, both inside and out have a similar meaning. But, where do you stop? All of that, any of that, belonging to anyone else still seems impossible, months after they have moved into a long term care facility, the house has sold, and the auction closed.

Mourning a place is such an odd thing to do, particularly when the people who made the place what is was are still very alive. But, I knew the last time I saw the house that a part of my family, a part of me, was leaving. Days before the auction, we drove down one more time to say goodbye.

Knowing it was my last time there, I walked down the long laundry room through the swinging wooden door and then through each room trying to burn the images into my brain. I tried to remember exactly what I saw when I walked in and they were still there. Grandma in the kitchen finishing up dinner and Grandpa sitting on the couch watching a Royals game.

The girls gave me questioning looks of concern as I sobbed my way out of there. In an attempt to explain, Dan asked me to tell them about some of my favorite memories of the house on the way home.

Through the tears I told them about staying up late playing pitch and waking up to play another game in pajamas. So many cards games, almost always boys against girls. Grandpa always kept score. Grandma always made sure there was a snack on the table.

Eating until I couldn't fit one more bite in my stuffed belly. Games of Marco Polo in the basement. Hide and seek outside. Swimming in the horse tank. Playing in the play house. The tire swing. The front porch swing. The 4-wheeler.

I searched the corners of my brain and told them about the first tulips of the season. Looking at birds out the window. Memorizing bible verses. Hunting for craw dads in the creek. Smelling Grandma's perfume and trying on her jewelry.

But as I was talking I realized that more than any of that, I wanted them to know the feeling that washed over me as soon as I pulled into the driveway every single time. This was the place where I could put the rest of the world away and just be me. Unconditional love, free for the taking. I was suddenly filled with the strong desire to replicate that in my home, for my family.

Through the rest of the quiet car ride home I realized I wouldn't forget. How could I? My days in that house are what make me, well, me.

As Ina and Cora were dragging their hand picked chairs chairs to the check-out counter of the antique store, so proud of their choices, and then again inside the house, picking the perfect spot for them to sit, I realized that they will probably remember the day they picked out their chairs for a long time. These were new family moments, new ways this table will be added to another generation of family memories.

Another generation of family memories, precisely what my grandparents were going for, what I am going for.