All of the Things Weekend 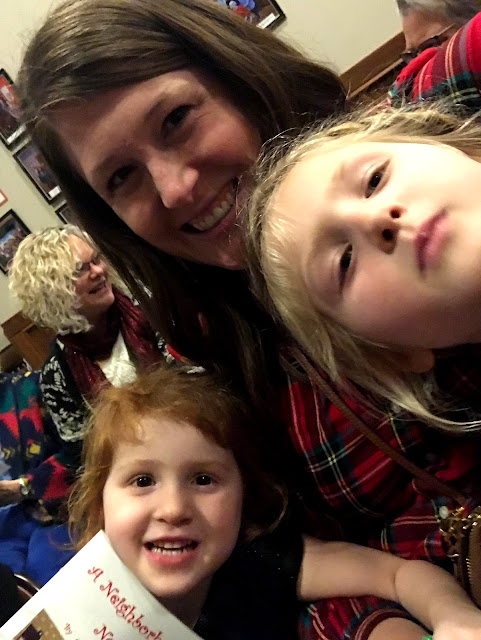 Like all of you, I'm sure, this weekend was one for our family record books as we tried to squeeze in as many things as possible within 48 hours.

On Friday Dan and I put on adult clothes (a sparkly skirt for me and...well...long pants for him), dropped the girls off at Grandma Frankie's, and ventured to the city for my part-time-job's Christmas party.

We devoured some delicious food (this was our first time at Lidia's!) and enjoyed talking to the people we only talk to once a year. I do adore built in date nights.

I worked (my 4  hours a week for aforementioned part time job) on Saturday morning while Dan and the girls cleaned out the van, that desperately needed a good vacuuming. Then Dan dropped Mira and I off at Aldi to grocery shop while he took the older girls to Home Depot to pick up the supplies to build their Christmas gift (unbeknownst to them!).

We watched a Christmas movie and then headed to our friend's house for a little game night birthday party. The invite said it would be "low key" so I wore leggings and Mira wore her PJ's (and no shoes). We played Things, ate chili, and soaked in some time with some of our favorite people.

Sunday the girls and I picked up grandma and grandpa at the long term care facility while Dan was at church serving with the baptism team. I feel I should mention this because when you have three small children the simple act of picking two people up takes a lot of effort and planning and may have involved a red headed child screaming in the bathroom, which caused other residents of the long term care facility to come check on her, which only led to a lot more screaming.

Once we were all loaded in the van, we headed to church where the girls performed with the rest of their class. 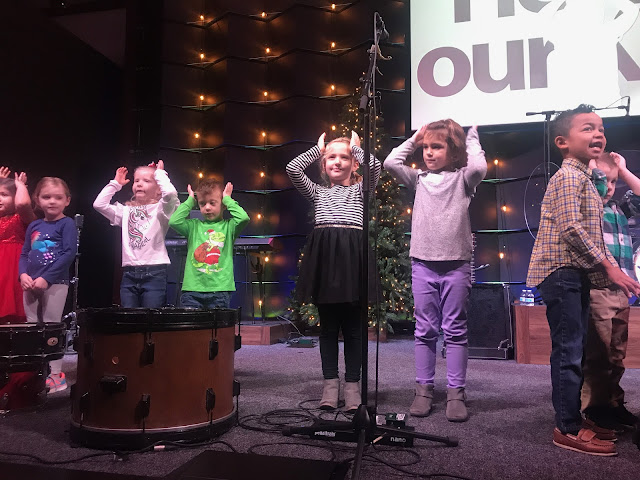 Ina was directly in front of us and dutifully went through every motion and word perfectly. Cora was across the stage, so I didn't get as good of a view of her, but she seemed to be giving that drum all the gusto she could drum up. 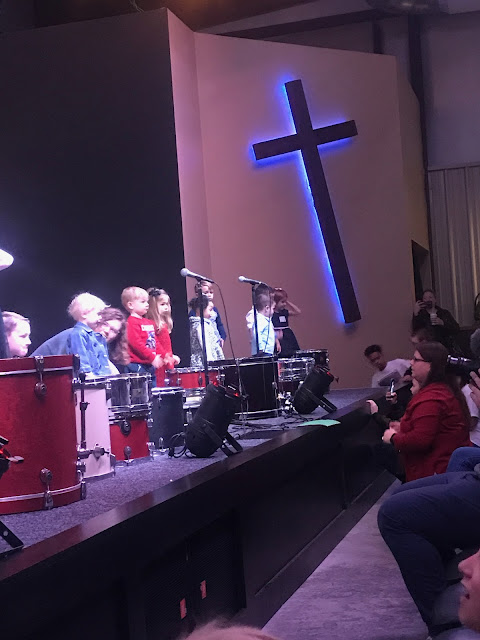 She and one of her friends also adorably peeked their heads on stage before their performance started. 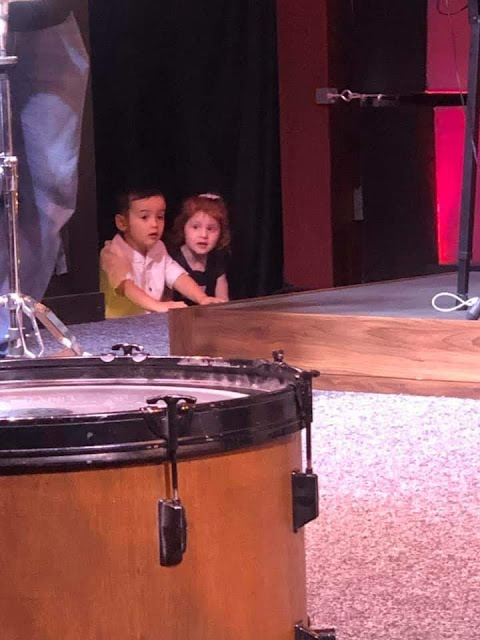 This was the same girl who flat out refused to go on stage at her dance recital the week before. 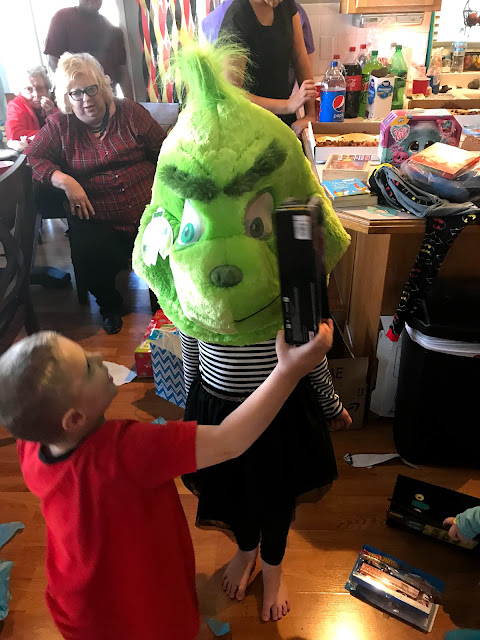 Much to Cora's dismay, we left the party a tad bit early to make it to our next destination, a play! Our town recently started a community theater and I jumped at the chance to reserve tickets for the Christmas performance, A Neighborhood Noel. 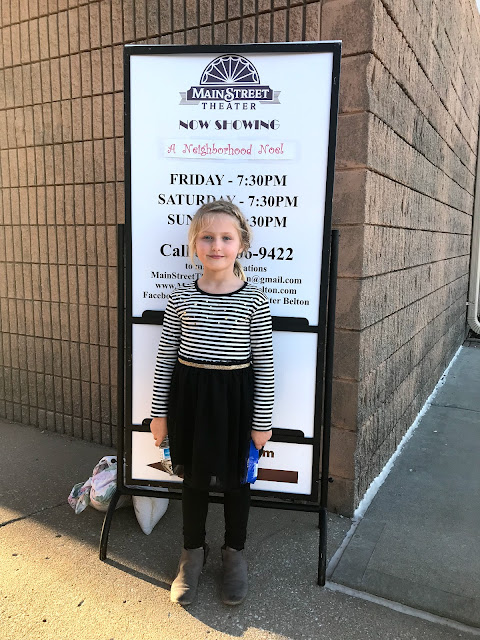 I didn't know how much I would sincerely love the show, but I absolutely did. One of Ina's friends was in the show as well, which added so much to her excitement. Cora may have been a little too young (or a little too exhausted) for the play, because Granny had to pick her up at intermission after she was making rude noises while laying under other's chairs.

After the play was over we hurried home and arrived with the rest of our small group for our annual cookie exchange. 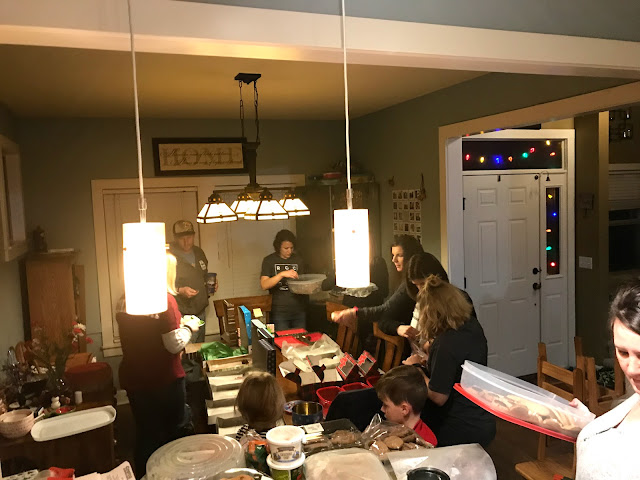 Dan made chicken and noodles and I had baked and cleaned earlier that morning. After we filled the cookie boxes and ate dinner we sat around watching YouTube videos and listening to the kids sing and dance. 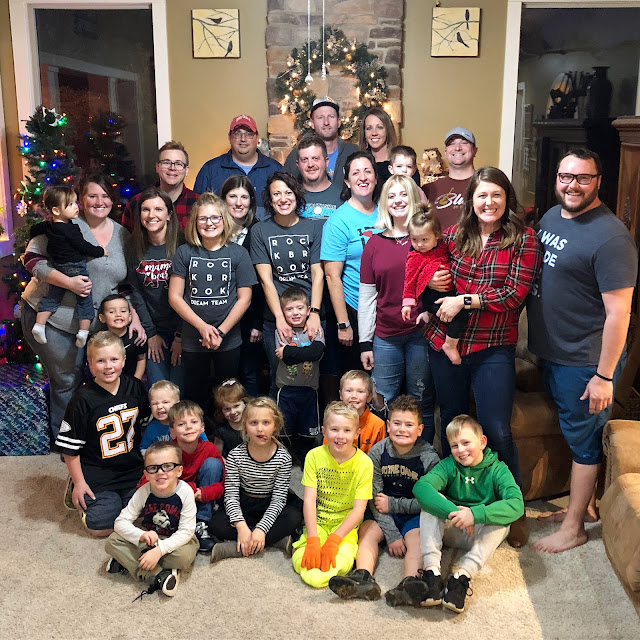 I just love doing life with these people.

Other notable things from the week before this one:

- We endured our last dance practice of the season. Whew.

- My work department had a White Elephant gift exchange. We were to bring something we already had and didn't want anymore and give it as a gift. Nice idea, right? I brought something from my kitchen I hadn't used once in ten years and happily came home with a beautiful tray from India.

- My aunt and cousin came over to watch the Chief's game on Thursday night and even though they lost by one point in the last few seconds on the game, I enjoyed watching it with them and drinking RumChata cinnamon hot chocolate.

Bacon wrapped dates - we used cream cheese instead of goat cheese because we know some people don't like goat cheese, but honestly, I kind of regretted that decision. 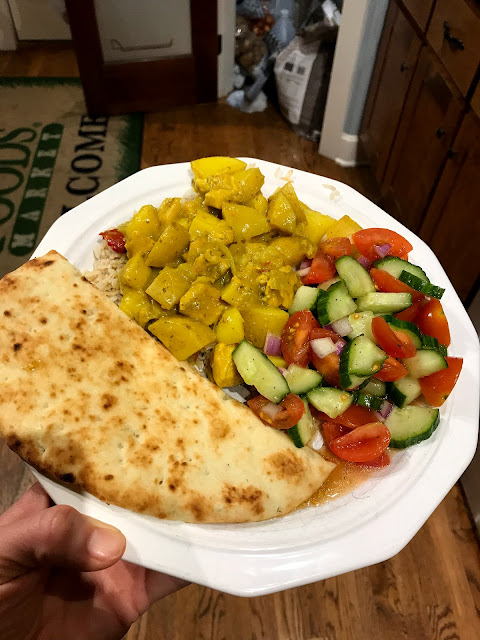 Chicken and potato yellow curry with brown rice, naan, and cucumber/tomato/red onion salad - this was everything I wanted in life and I looked forward to eating leftovers as soon as I finished the first meal.

Asparagus, bacon, and egg salad with a Dijon vinaigrette. So delicious. I want to repeat this all spring.

For the cookie exchange I contributed spiced pecans and the amazing shortbread chocolate chunk cookies (rolled in red sugar for a little festive touch). I would strongly recommend those recipes to anyone looking to do a little holiday baking.

Also, because you just need to - egg nog.

I hope you have a great week before Christmas! <3
Posted by Racheal at Wednesday, December 19, 2018