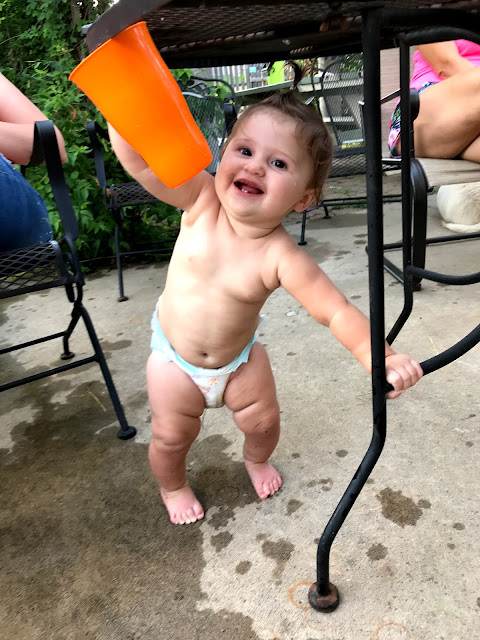 (I spend a fair amount of my days reveling in the deliciousness of those thigh rolls. Aren't they just the absolute best?!?

I have to start out with the weekend because it was a good one!

Saturday was our church's serve day. We put on our shirts, dropped Mira off at Granny's, and then drove through the pouring rain to church for the 8 AM huddle. 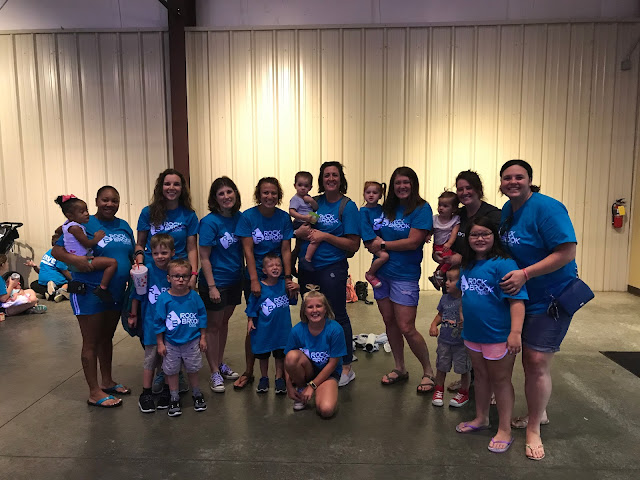 Our church organized a day for everyone to serve. Basically everyone found ways to help other people and the community on a pre-defined day. 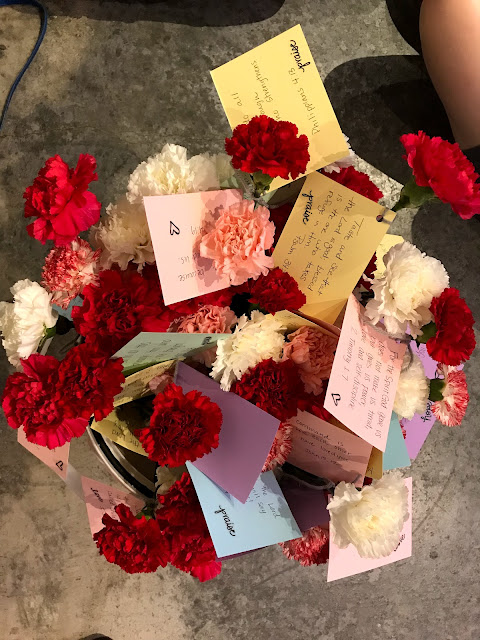 Dan helped a family move, Ina picked up trash, and Cora and I joined the rest of the ladies in my small group in a nursing home to give flowers to and talk with the residents. We had such a good time and my heart swelled seeing members of our church sprinkled thoroughout our community in their blue shirts being the hands and feet of Jesus.

Shortly after we arrived at the nursing home an elderly gentleman asked if any of us played cards which led to Danielle and I playing a few games of pitch. Playing cards is one of my favorite things in life and I could tell the nursing home resident was also thoroughly enjoying himself. I think we found a new monthly service project! 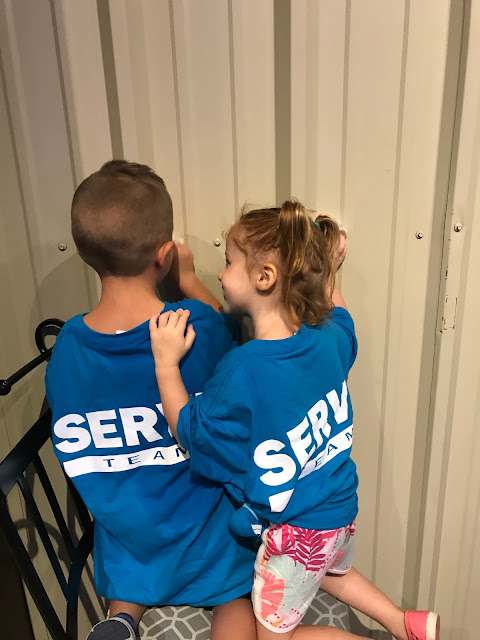 Cora did so well by cleaning the church walls, talking to a few of the nursing residents, and handing out a few flowers. 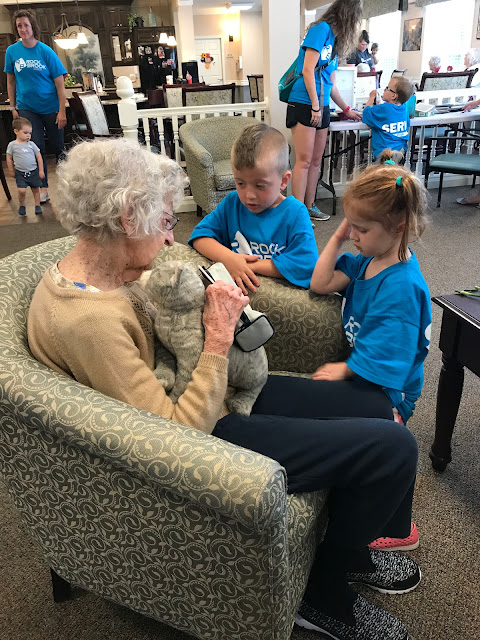 I later heard that picking up trash in the heat was a little hard on Ina who didn't eat the breakfast I packed her. She later told me she was very glad that everyday wasn't serve day. 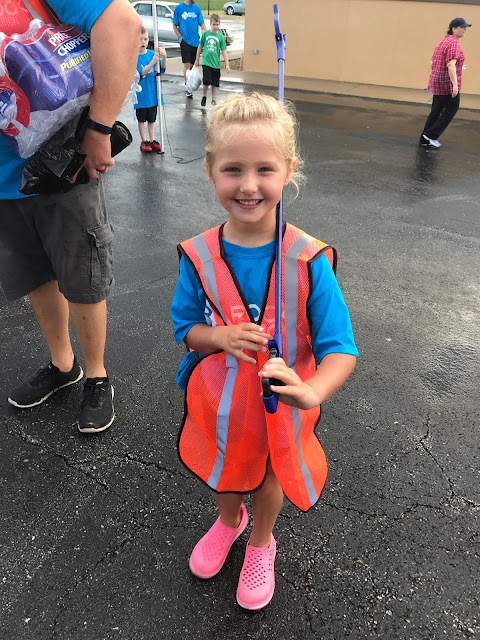 After the church served us (and a whole lot more people) lunch, we headed home and did a few chores before getting in the pool. 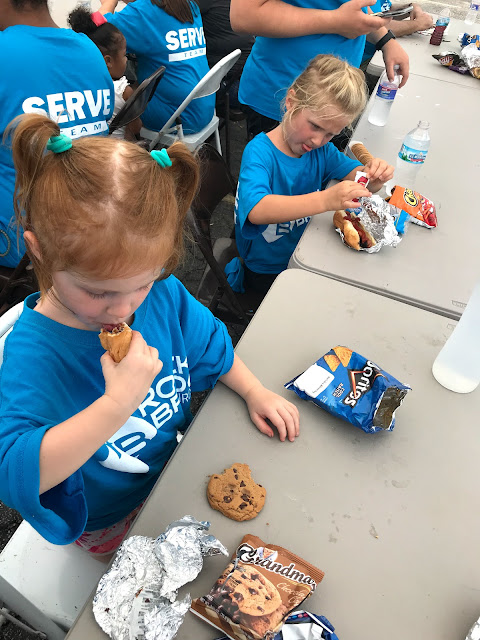 Ina and I had to cut dinner and swimming short because she was invited to a glow in the dark birthday party that started a EIGHT PM. I understand that the "dark" part can't start until late, but I almost RSVP'd no based on  my bedtime alone. 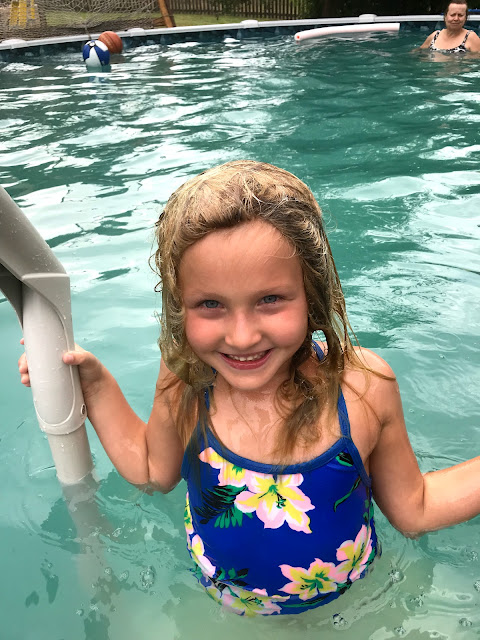 My bedtime ended up not being a factor because when we returned home from the party my mom and Danielle's mom were still at the house with dinner all cleaned up and ready to play more cards. Multiple pitch games in one day - thank God for afternoon caffeine!

Cora fell asleep in my arms and Ina fell asleep on the wood table bench, so I would say that the day was an exhausting success.

After not near enough sleep Danielle and I woke up for our Sunday morning coffee walk and then we all headed to church where we watched our pastor interview an incredibly inspiring man. 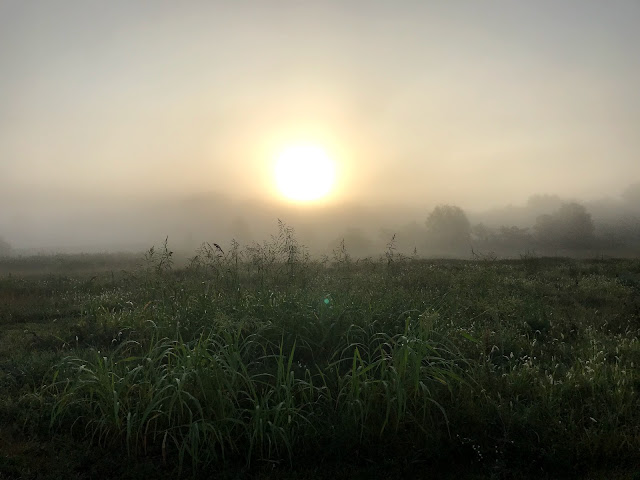 We came home and put on our party prep hats to get the house ready for our small group reunion!

We have had a few couples leave our small group for various reasons (schedules didn't work, moved away, moved churches, etc.), so we decided to have a reunion with everyone who used to be in our small group plus our current small group. 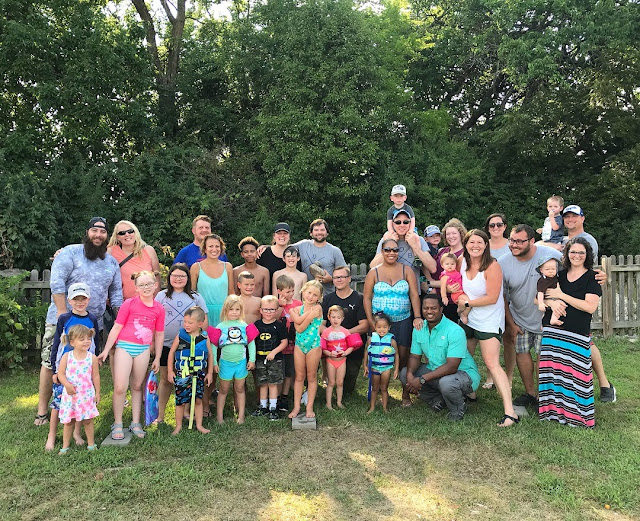 This was literally the best idea I have had in a very long time. We absolutely loved getting to see everyone that has had such an impact on our lives all in one place. There were of course some people who couldn't make it, but we had a pretty good turn out! 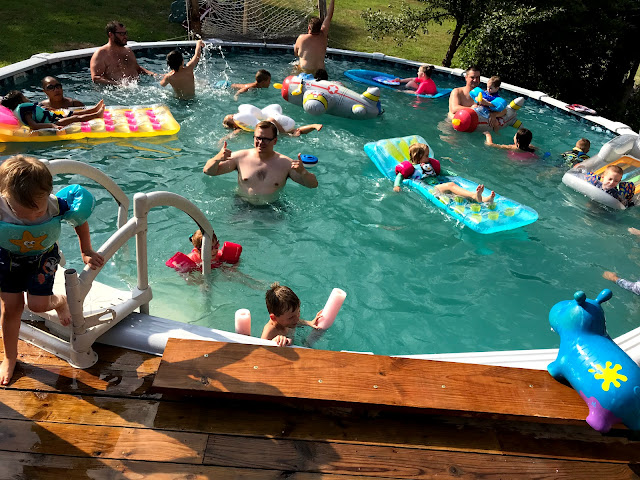 The pool, my heart, our bellies - all were so full by the end of the night!

Now for the rest of the week...

On Monday some girls from small group came over to write bible verses on cards we made for flowers we delivered to the nursing home for our church's service project. Having people over on a week night, after dinner no less, was a fun treat. 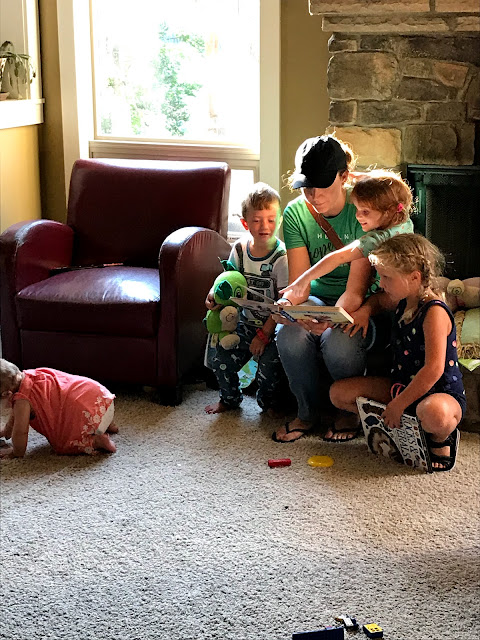 Of course the kids swarmed one of the moms who looked willing to pay attention to them while Danielle and I were cleaning up dinner. Amy has a heart made of pure gold.

Tuesday we went to the farmer's market after work and picked up some deliciously fresh tomatoes. After eating the first bite Dan announced that summer has officially begun. 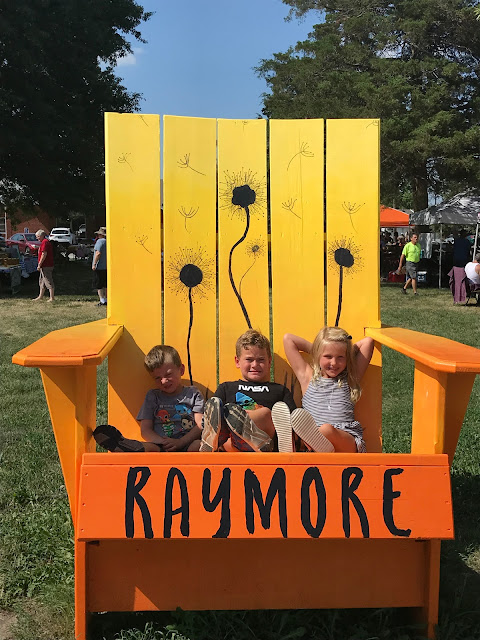 Tuesday was also a first for our family, a girl from Ina's school, bus, and dance class came over for a play date. Obviously we have a lot of kids over at our house, but typically their parents are with them, so this was new to us. Ina was so excited she hid from her (trying to surprise her), and I had to drag her out of her hiding place and explain that generally we don't hide from people who are coming over to play.

Something else - while we were swimming Ina told me to slam dunk the basketball. I almost laughed and told her I couldn't, but then Dan chimed in that, "it's only 8 feet, you can do it!"

Let me tell you that there are few things that make you feel as cool as slam dunking a basketball from a pool. I kind of didn't want to stop.

Wednesday some friends came over for happy hour, dinner, and swimming. There is just something about a cheese, olive, and hummus board that makes the middle of the week something to be excited about.

Thursday we had parents as teachers after work and met a very nice family at the school playground. As usual, the temperature was above average, so Ms. Tricia put out a water table. Poor Mira wanted to play in it so bad, but grew tired of standing, so I just put her in the middle, dress and all. 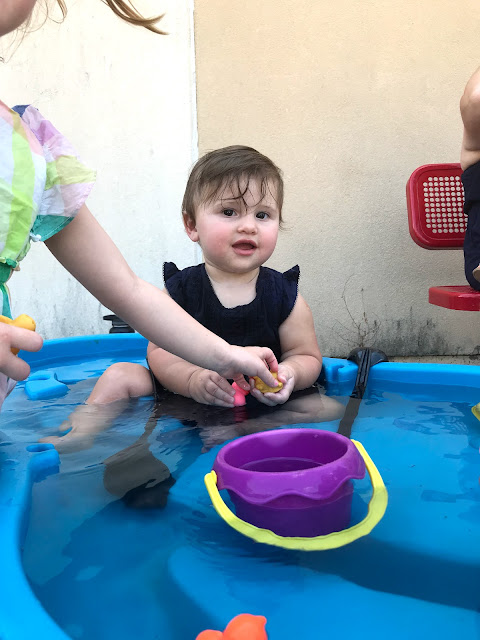 After dropping the rest of the family at home to start dinner, I raced to my grandparents' assisted living facility to pick them up and bring them to our house for dinner. 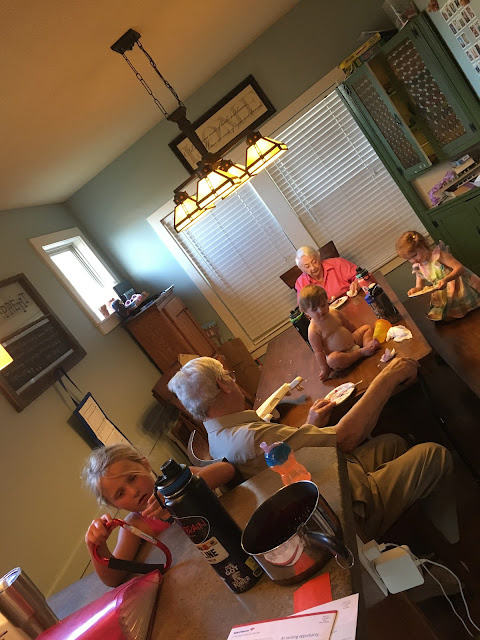 I am sure our full house was a little overwhelming to them, but they seemed to enjoy themselves and it was nice getting to visit with them in a non-nursing home environment.

Friday the Champs were away and our little family ate breakfast for dinner, swam, and watched a movie to relax in preparation for the eventful weekend ahead.

Recipes from the week: 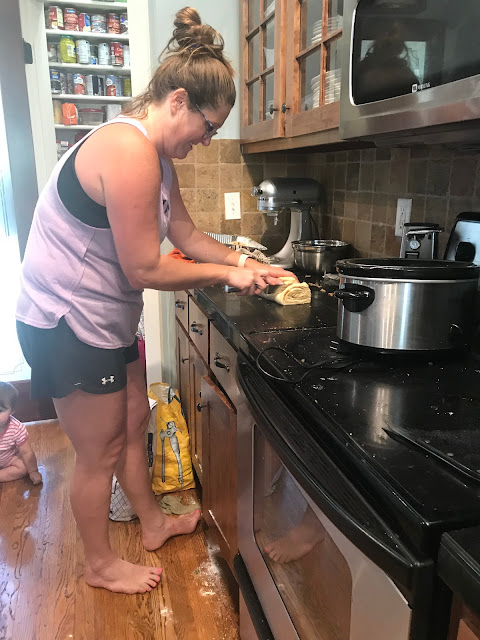 Also, I made a batch of cinnamon rolls to freeze for Cora's birthday party next week. Danielle captured the above pic of me in all of my work-from-home glory. :) 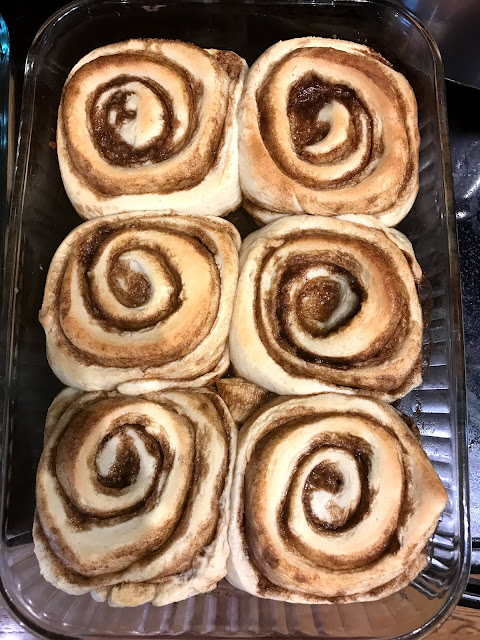