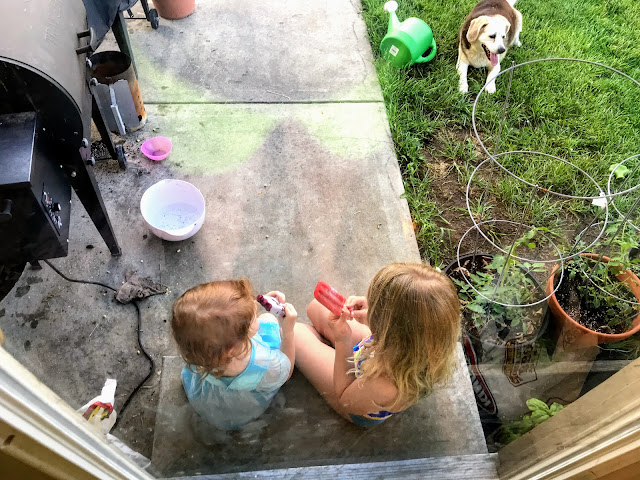 In one weekend we hosted three different groups of people, went to a BBQ outside our house, built a deck, went through a Costco sized lot of sunscreen, exercised everyday and oh, also potty trained a 2 year old red head.

Over Tuesday morning coffee the adults in the house decided that we were thankful the weekend was over so we could finally get some rest. Ha!

The weekend actually started out pretty chill. Dan had to work late and the Champs were gone, so the girls and I just hung out. I had marinated some chicken before I left for work, so dinner making consisted of firing up the Traeger and opening a bag of arugula.

After putting Mira to sleep I did get the chance to swim with the older girls for a few minutes and soaked in the time with them.

Saturday morning Danielle and I went on a fast 3 mile run and then I worked for a few hours while Dan and Mr. Kyle started their big weekend project - a deck on the back of the pool. I feel like it is important to note that this deck is being built 100% from scrap wood that Dan has brought home from work over the years, which I have always been unhappy about until this weekend.

The rest of the afternoon was spent swimming, potty training/negotiating, and making food for dinner.

My sister's family came over for some pool action and we had so much fun swimming and playing and talking and laughing and drinking our new favorite drink of the summer (see recipes below). I love them and wish I could see them more often. 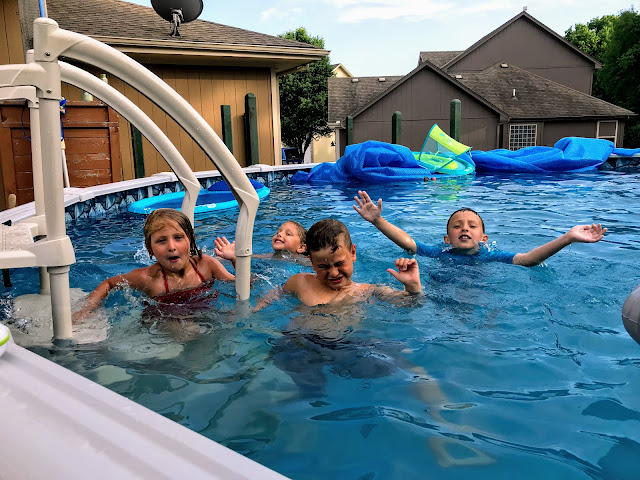 Sunday morning Danielle and I went on our Sunday morning coffee walk (this might be my favorite part of the week) and then we all got ready for church. After an amazing church service (our youth pastor rapped -seriously) we came home and did the swim/cook/potty train/work on deck thing until it was time to visit Grandma Frankie's house for a BBQ.

The girls always love going to her house, and this time was no exception. At one point I walked up to see my girls literally digging their fingers into an otherwise flawless and uncut ice cream cake and proceeded to yell and flail my arms and ask, "what made you think you could do that?" to which all the other adults sitting around said, "we told them they could." 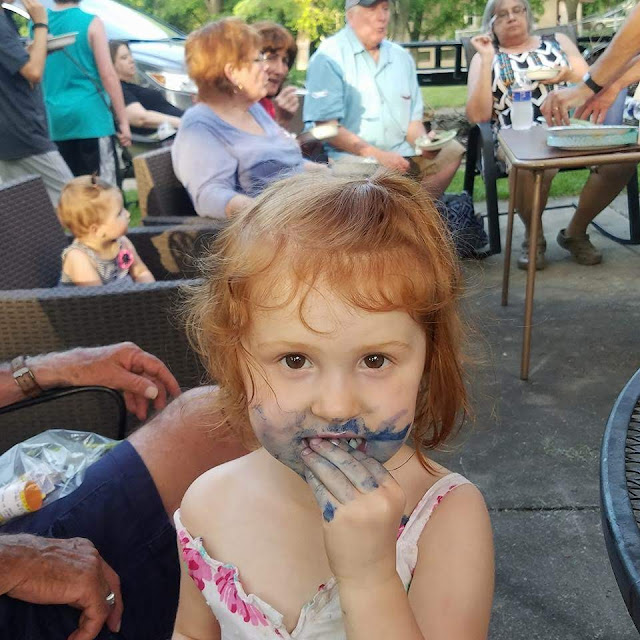 At another point an older gentleman told Dan and I we were the luckiest people in the world to have three healthy beautiful daughters and I was so thankful for that reminder.

We returned home to Danielle's family visiting our house and joined them for a swim after I put the two youngest to bed after a very trying potty training day.

My strategy has pretty much been to have Cora sit on the potty every thirty minutes for as long as it takes me to read her a book. Although she sometimes puts up a fight, she does eventually sit there, but rarely will go potty. I have offered her all sorts of rewards and she did earn quite a few of them this weekend. She has also had a few accidents, which is of course to be expected, but she mostly just holds it until she is in a pull up for nap or bed time, which isn't healthy or ideal. I am hoping this is just part of the process and if we keep on with our system, it will eventually work.

Monday Danielle got up early to make cinnamon rolls and I mostly stood there watching for moral support. Then we walked down to the gym to complete Murph with some of my favorite people. 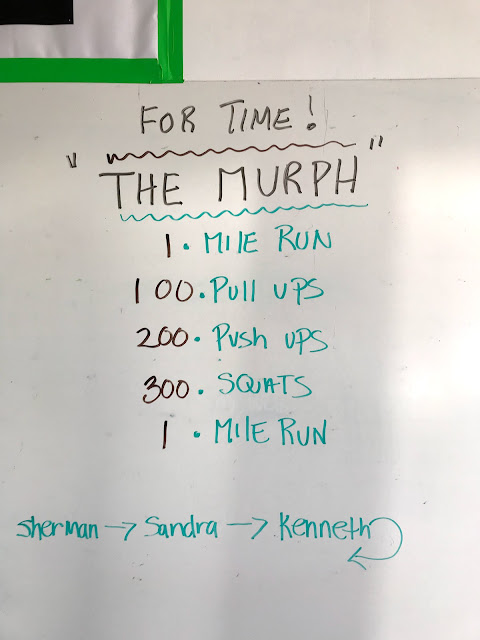 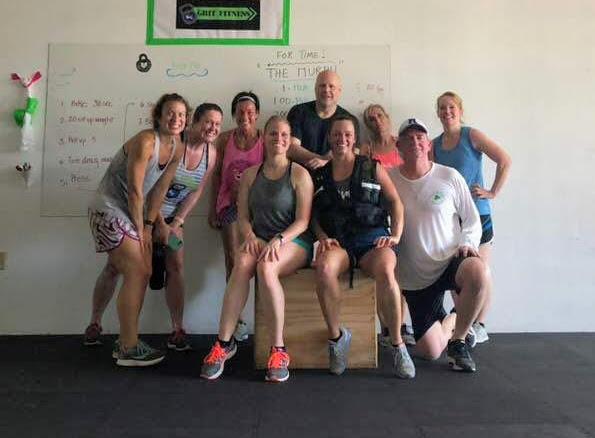 I can't do a pull-up, so we did ring rows instead, and the majority of the push-ups were from my knees, and I am still sore today. Oof.

We walked home to the Nybergs already at the house ready to swim and the cinnamon rolls hot out of the oven.

I wish I could say that I enjoyed their visit, but I spent most of it trying to get Cora to go to the bathroom so she could get in the pool, but she was just hysterical. After a few hours of nothing but tears and frustration from everyone she took an early nap.

Brad did help Dan and Mr. Kyle with the deck and Chessa did help by bringing over mimosas, lunch, and holding Mira while I was in the throws of potty training, so I was so thankful they were there. 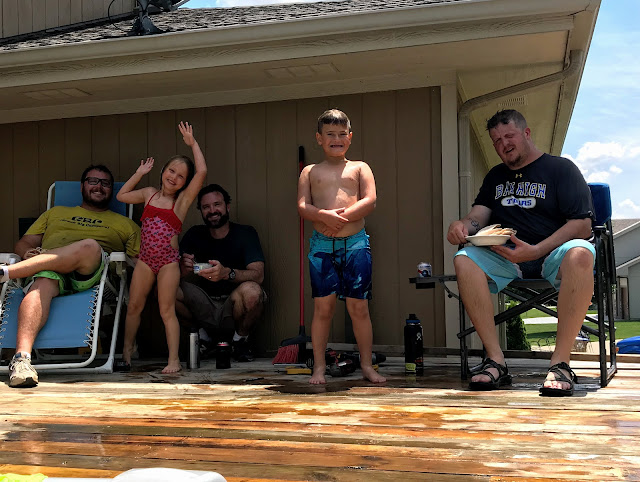 After they left I did get the chance to lay horizontal on a floatie in the pool for a few minutes while the two younger girls were asleep and Ina was swimming around me.

Through the sheer power of teamwork the men were able to finish the floor phase of the deck, which of course called for many cannon balls. I did one and hit the bottom of the pool so hard I decided one was enough for me.

The rest of the afternoon was filled with some more potty training frustrations and a few successes and a very early bath and bedtime.

I have survived potty training once and I know I will again.

Here are some recipes we used over the weekend:

Epic brownies - Danielle makes these, because when I do they turn out more like cake.

A great chicken marinade served with arugula salad and grilled corn on the cob.

Beergarita- a beer topped with a few splashes of flavored margarita mix. So delicious.

Have a wonderful last week of May!
Posted by Racheal at Wednesday, May 30, 2018