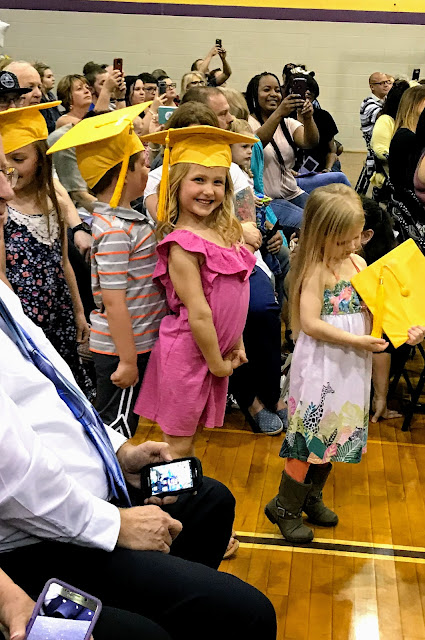 The graduation started off with the kids marching in to Pomp and Circumstance. I swear that song  triggers my tear ducts. Once all the kids were placed on the risers, they sang some of the cutest songs. My favorite was the ABC song. 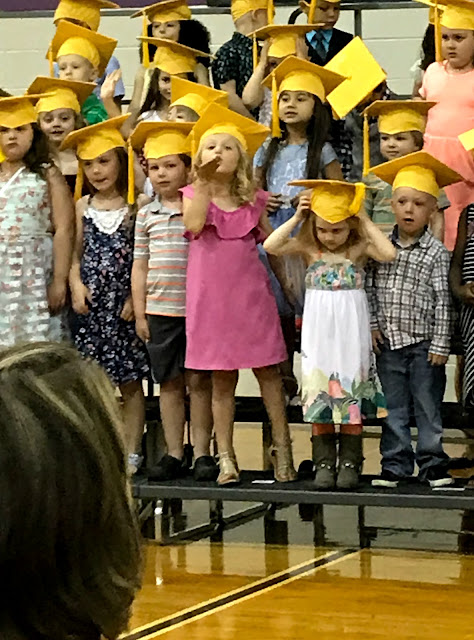 Ina, being the performer that she is, got into the hand motions so much that she knocked her cap off her head. Her little lip started to quiver out of embarrassment, but as soon as she saw the thumbs up from me, she kept right on singing and dancing.

From then on, the cap was just a bother to Ina, so at one point she walked off the risers to hand it to her teachers. Which prompted another kid to do the same...and  then another...and before we knew it there was a mass exodus of tiny graduates. The teachers were quick to get them back in place, but the whole thing was hilarious to watch.

After the songs they called the kids up to individually accept their certificate from their teachers. Ina's name was accidentally called twice, to which her teacher replied, "We haven't cloned her yet!" 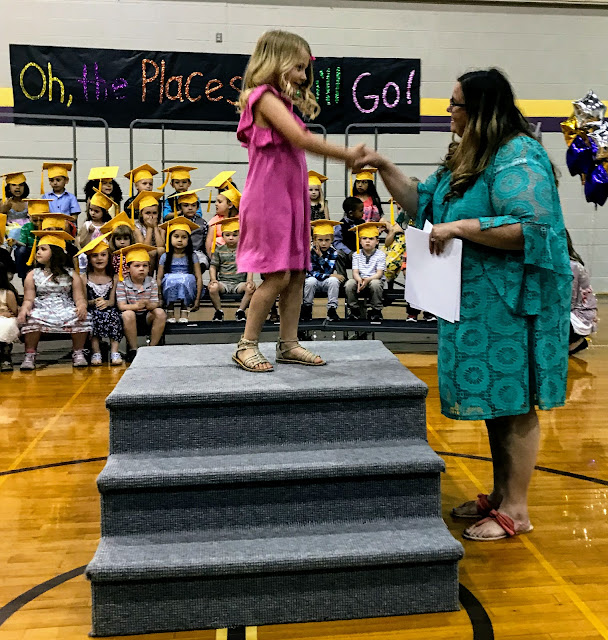 The night was a great wrap up to a perfect year. I look back at her picture on the first day of school and she has grown so, both physically and mentally.

She left the little world we have created for her. She experienced a boy "liking" her. She experienced a girl not liking her. She seemed to love everyone in her class, but I could tell there were a few she played with more than others. I honestly couldn't get her to tell me anyone's name for the first few weeks, other than the teachers, who she adores with her entire heart. Miss Isabel, Miss Lori, and Miss Joan are beyond amazing. 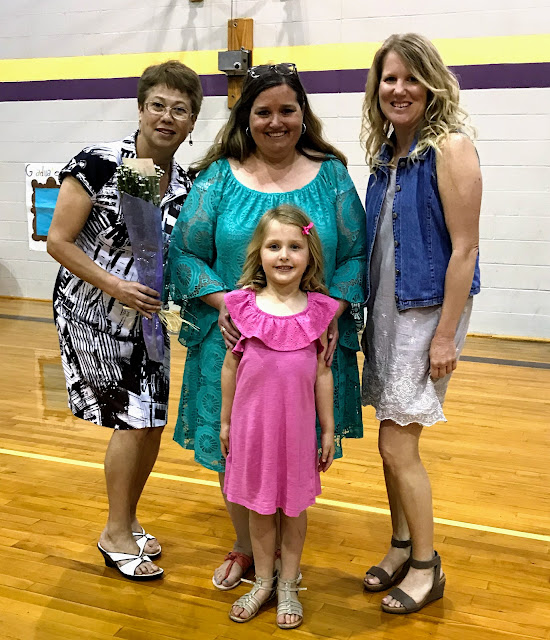 Her preschool is operated by the school district, and therefore free to anyone in our town. As the price was low, I didn't really know what to expect. However, her teachers and the school have blown away any expectations I would have had. I cannot say enough great things about our experience and we hope to send Cora there ASAP.

I was a little worried about Ina being too domineering with her peers (like she is with her sister), but her teachers assured me during parent teacher conferences that she likes to help and play mother hen.

A few things I wanted to note about Ina's preschool year (taking notes for her college application):

- She helped to initiate a school experiment to determine the school's favorite color. After weeks of work surveying each class and tallying the results, she reported that it was BLUE! The school celebrated by having everyone wear blue to school. You better believe I was 15 minutes late to work because painting Ina's nails blue took top priority.

- Her class created a fund raiser to purchase well parts for children in Kenya who don't have access to water, after having to carry water 1/4 mile themselves from a local lake. They raised $1,500!

- Ina petitioned for pizza day to be moved to Thursday, because the part time kids don't go on Fridays. (I find this absolutely hilarious, because everyone knows that pizza day is Friday and has been that way since the beginning of time. I would have never thought to question this, but Ina did.)

- Undoubtedly her favorite thing about school has been "share bag" which is basically show and tell. Over the year she took the following:

- She discovered Highlights Hidden Pictures, which bring her more joy than anything else.

Kindergarten is soon, and I know the teachers and school will have some pretty big shoes to fill in Ina's mind. We are so looking forward to the next chapter!