Happenings from this Week 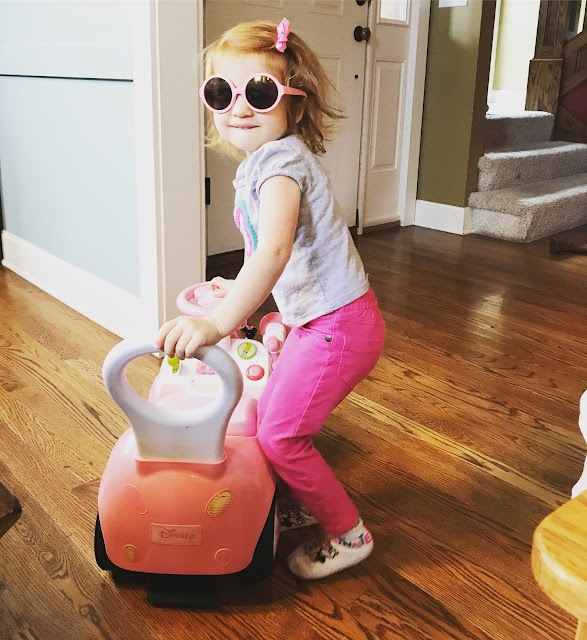 I have neglected writing down what I am thankful for, which is changing TODAY. Until then, here are a few things I remember from the week that didn't involve changing diapers.

Our parents as teachers program had a story time walk around the lake, which we weren't planning on attending. However, Dan called to say that he would be home late from work, so I made the very fast decision to quickly prep dinner and load the girls and the stroller up in the car. The set up was so cute and fun and while the girls might not have entirely followed the story, we still got out of the house. 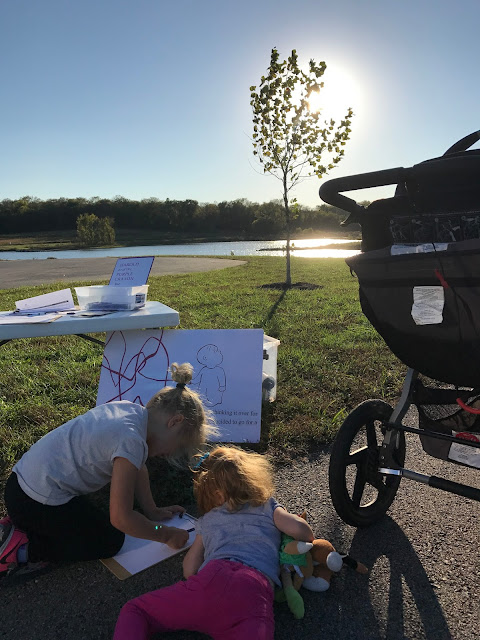 I am also incredibly thankful that the berries Cora found on a bush and shoved in her mouth while I was reading a page to Ina weren't incredibly poisonous.

Our church had a party for all the people who serve, also known as The Dream Team. We ate great BBQ, danced with the girls to the always awesome and sometimes funny worship music, laughed at the hilarious jokes, and Dan wrangled the older girls while Mira and I snuck off to the nursing mothers room during the inspirational sermon.

Ina keeps on asking when the next "church party" is. 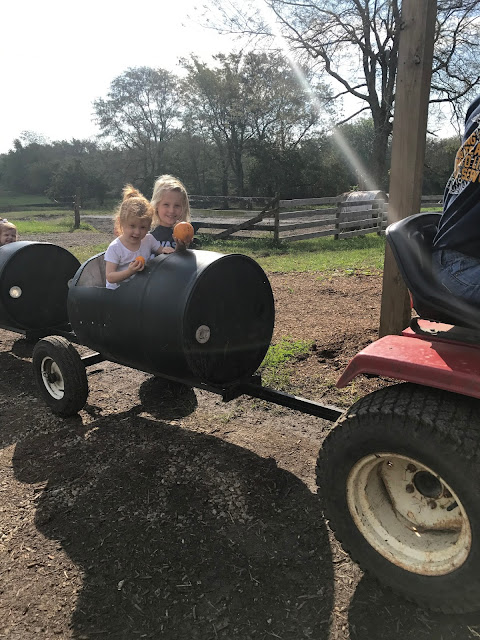 The girls and I met my sister and a friend and their kids at a new to us pumpkin patch. Almost as soon as we arrived I saw one of my very good friends from early college. I was so excited to see her I practically picked her up when we hugged. I chatted her ear off for a good part of the morning, while relying on my village to help me watch the bigger girls. 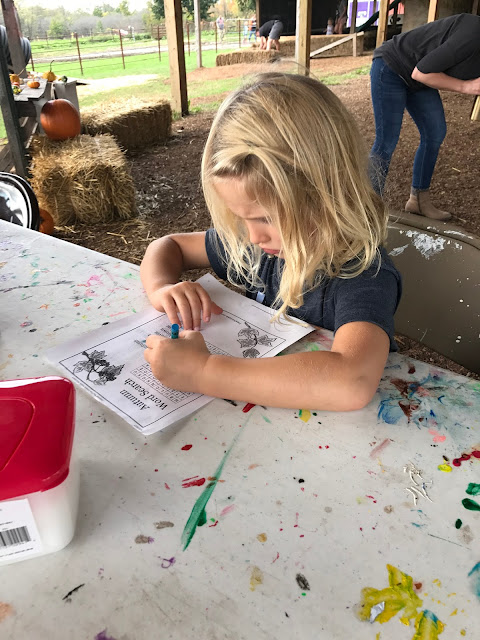 The girls walked through the pumpkins, painted pumpkins, did pumpkin word searches (Ina's favorite part), rode the little trains cars, went through the corn maze, played in the corn (Cora's favorite part), and went down a huge slide approximately 30 times. Cora couldn't go by herself, so between the two of us we went down pretty quickly and even caught some air a few times. 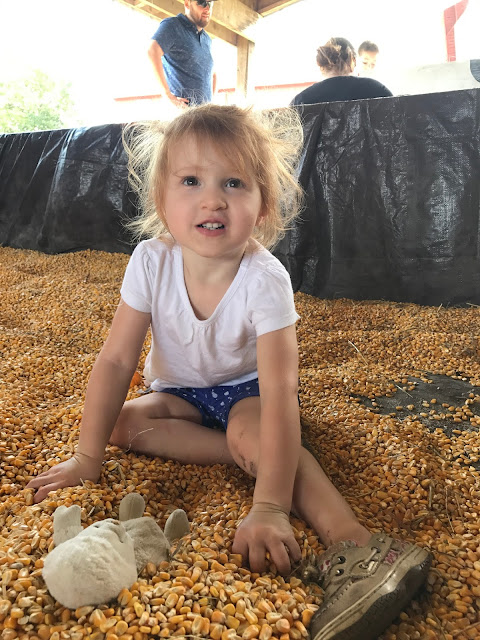 As soon as we skidded to a stop Cora would hop off my lap and squeal, "Again Mom! Again!" and already be at the bottom of the stairs before I could get up to tell her that this time really was the last time.

After the pumpkin patch I bravely (stupidly?) took all three girls to Aldi by myself without feeding them lunch during nap time. As soon as we walked in a immediately grabbed a bag of goldfish crackers for them to munch on while I shopped and a box of red wine for me to console myself with then we got home. 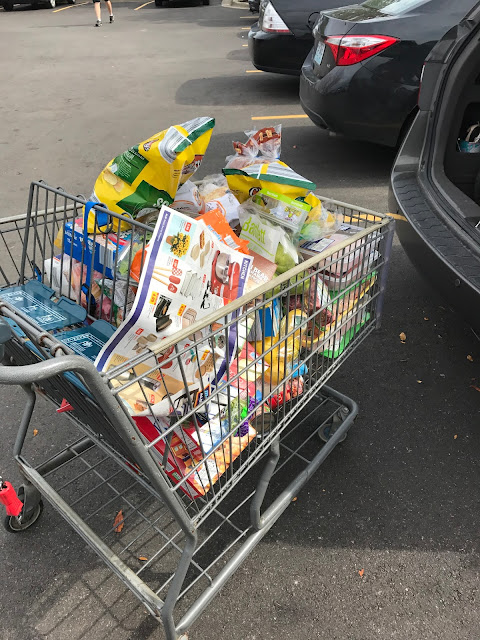 I won't go through the horrible details, but I will say I earned that cart full of groceries. 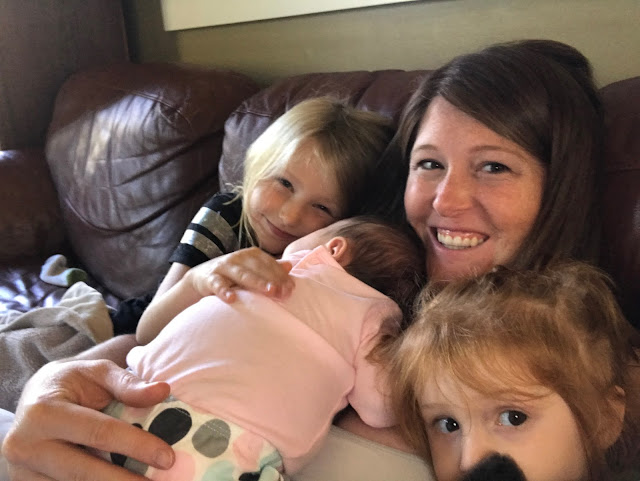 Our Sunday routines are pretty set in stone: church, lunch/nap, and then small group. To note, Mira slept all the way through church and we saw 4 baptisms! Yay Jesus! Granny made us dinner, so after small group all we had to do was load up the girls and head over to her house. No cooking, no dishes. It was pretty nice.

Oh also, Mira took her first bottle, no problem. Dan gave it to her, with both of them laying down. It was pretty cute.

I finally ordered a carseat attachment for my double BOB. The big girls took turns walking or riding the one mile to the park and it was so nice to get out of the house and shake out my legs. 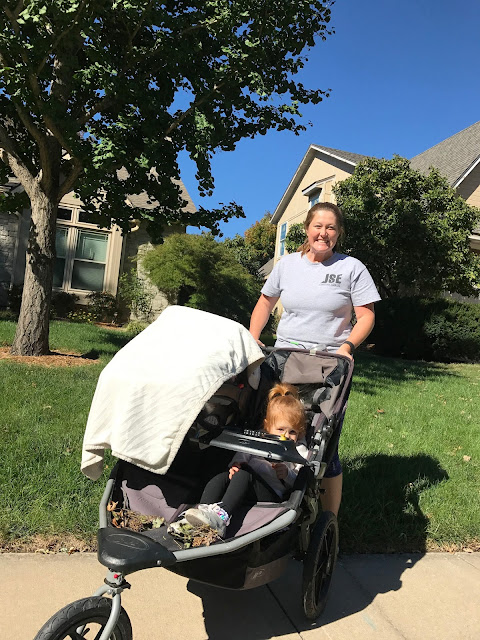 Dan was sick. How, just how, do single moms do it?

The only thing that was incredibly memorable was the amazing dinner we had - spiced shrimp with yogurt, naan (from Aldi), and a tomato cucumber salad. I was secretly thankful that the girls don't love shrimp, because Dan and I had to fight over the last of them. This combo will be repeated very, very soon.

A few other recipes we have tried lately:

Cabbage, sausage, and potato soup: this was great on a cold day. I used onions instead of leeks and put everything in the slow cooker so we came home from church to a delicious dinner.

Sullivan Street Bread: I made bread! From flour, yeast, and water. It felt like magic.

Pumpkin mac and cheese with roasted vegetables: this was just okay...but the roasted cauliflower (our CSA delivered a beautiful yellow cauliflower) was my absolute favorite part. I forgot about how delicious that is! 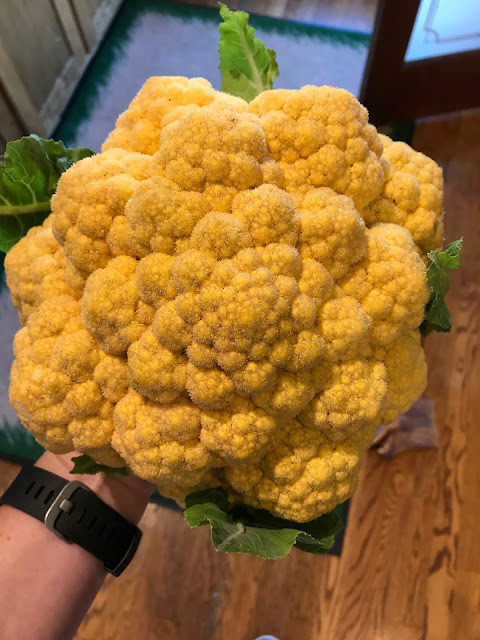 Pizza pinwheels: I know what is on our super bowl menu!

I hope you have a good end to your week and weekend!
Posted by Racheal at Thursday, October 19, 2017