Half way there and feeling...

Generally pretty good. I still occasionally have a "blah" day, but am mostly loving the second trimester. 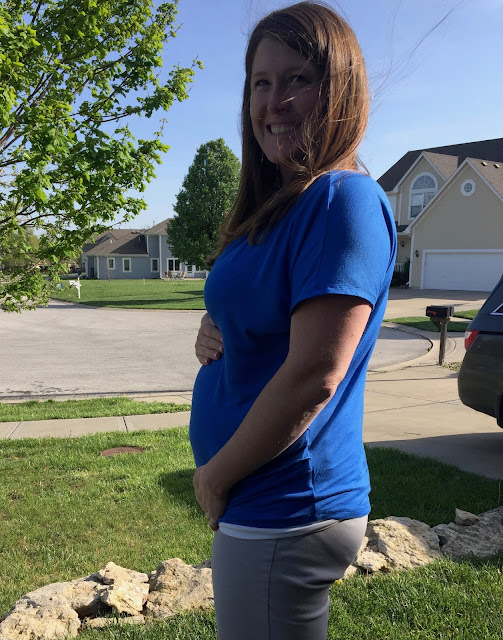 (This is the first bump picture I have taken. At 20+ weeks. #ThirdChildProblems

Lots of kicks! I am pretty sure I felt a little sporadic movement starting around 10 weeks, but now anytime I eat baby girl has a party. Me too girl, me too.

Speaking of eating, I am very hungry. I need to capture what I eat in a day because it is pretty much nonstop and mostly carbohydrates. I try to squeeze in at least a green monster smoothie for breakfast to get some veg in my diet. Actually, this week veggies have made a comeback, but I still cannot be trusted with cookies, chocolate, or candy.

I am sleeping decently (thanks to my Snoogle), however if I happen to wake up in the middle of the night, it takes me an hour or so to go back to sleep.

I have a goal to workout three days a week for the foreseeable future. The coaches at Fitness Tiger KC are absolutely fantastic and help me with any modifications I need to make, which can basically be summarized by:
I went to the gym today and felt great.

Every time I think we have decided on a name Dan decides he doesn't like it. I know we will find one eventually, but nothing solid for now.

We went back and forth about putting the new baby is Cora's current room (as it is all decked out for a baby) and moving Cora to another room, or keeping Cora is her room and creating another "nursery." I think we have decided on the later because a). Cora is still sleeping in a crib and I don't want to mess any of that up. b). It doesn't seem fair to Cora to take away her room or to the new baby to not have a room planned for her. However, having said that, there will be little work done to the nursery. We borrowed a crib from Danielle. I will buy black out curtains, hang a wall decal or two, and find a changing table on Craig's List. There is a full bed in there now, which I am considering keeping in there for the nursing season until Cora is ready for it in her room.

How the rest of the family is dealing:

Ina: she has really come around and often talks about how she will soon have another sister to take care of. "Mom, can you believe we are going to have TWO girls to take care of?!?"

Cora: she doesn't really understand just yet. I tell her there is a baby in my belly and she lifts up my shirt, sees by belly, and gives me a confused look. She is, however, incredibly possessive of me and doesn't like other babies (and sometimes Ina) to get to close to me. She has been known to yell, "No baby!" at other kids at small group that have gotten too close and will occasionally scream if Ina interrupts our cuddling. Poor girl doesn't know what is coming...

Dan: he is generally excited, but, similarly to me, will occasionally become overwhelmed with the thought of adding another baby to the mix. Things just started to get easy with Cora. (Well, in some ways. See above)

Looking forward to the ultrasound this week. It isn't as exciting as the last two 20 week ultrasounds, because we already know the gender, but I am still pumped to see baby girl.

Related:
19 Week update with Ina
21 Week Update with Cora (I was so little! I attribute that to being pretty sick a few times during the first trimester with her. Ha!)