Hello there, remember me? 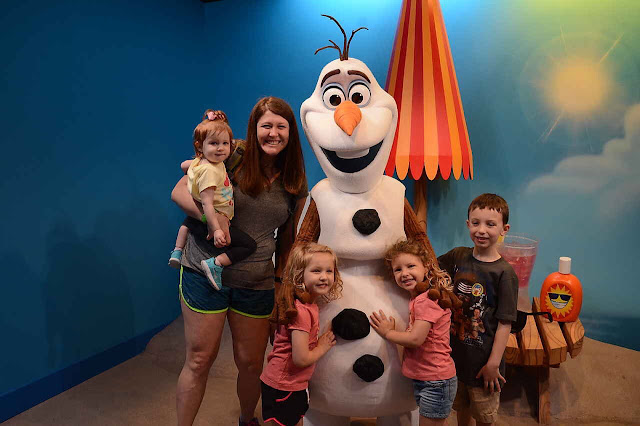 I am recovering from an all out trip to Disney and dealing with a toddler who has decided to wake up at 5 am. However, I am determined to get this post written today before I forget everything that happened.

This trip has been in the works ever since my oldest nephew Kauffman was born. My cousins are huge Disney fans, and because they are so generous, have wanted to take the kids to show them all the wonder and magic there is to offer. This was the last year where Kauffman could miss school and Ina was just old enough to maybe remember everything, or at least something, so we went. Cora and I were lucky enough to tag along.

Tagging along was exactly what we did. I didn’t plan a thing, but very much enjoyed the benefits of every ride, fast pass, and show being planned for me. 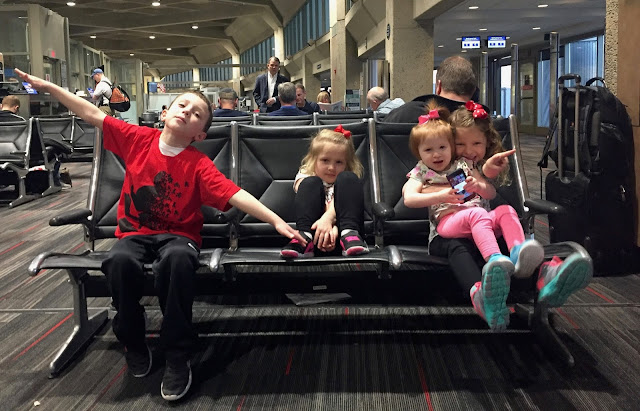 The night before our plane left, we spent the night at a hotel close to the airport so we could be there bright and early and ready for action. We had a layover, but the kids did great. My biggest memory from the flight experience was Ina crawling under a bench an unsuspecting woman was sitting on and poking her in the rear end. Thankfully, she thought it was hilarious, but Ina definitely learned her lesson.

After we landed we grabbed our rental cars, ran to the grocery store for some breakfast supplies and park snacks, and then checked into our first hotel at Animal Kingdom. We had a suite that was fantastic. The best part was seeing the animals (giraffes, zebras, long horns, ostriches, etc.) right outside our balcony! 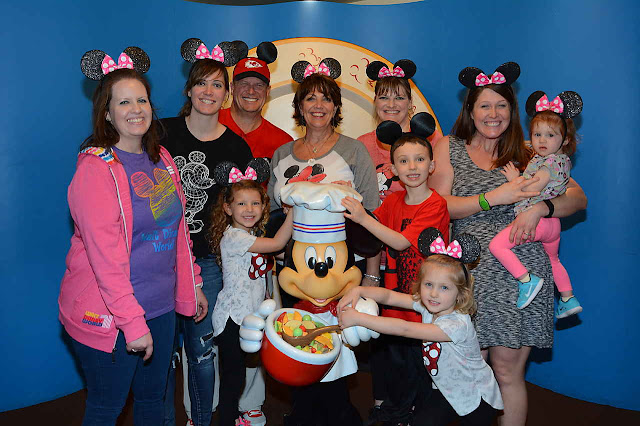 Soon it was time for our dinner at Chef Mickey's, a character buffet at The Contemporary Resort. The food was pretty good for buffet food, but of course the highlight was seeing the characters. Every single one gave each table a good one to two minutes of their undivided attention. There we say Mickey, Minnie, Pluto, Goofy, and Donald. 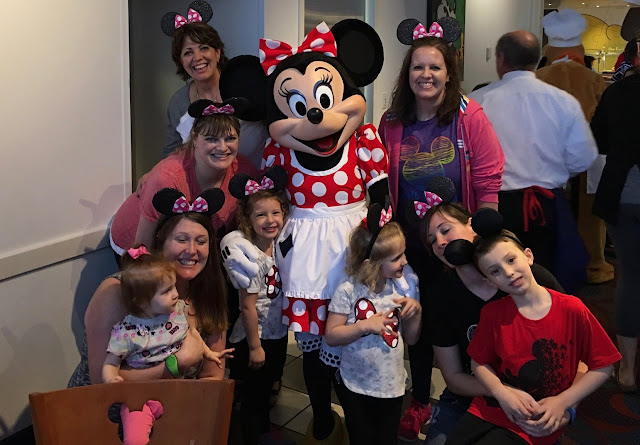 The kids were so excited to see the characters, and unlike the first time I took Ina to Disney and she cried next to the characters, this time everyone gave very big hugs. Cora even touched Minnie’s nose! 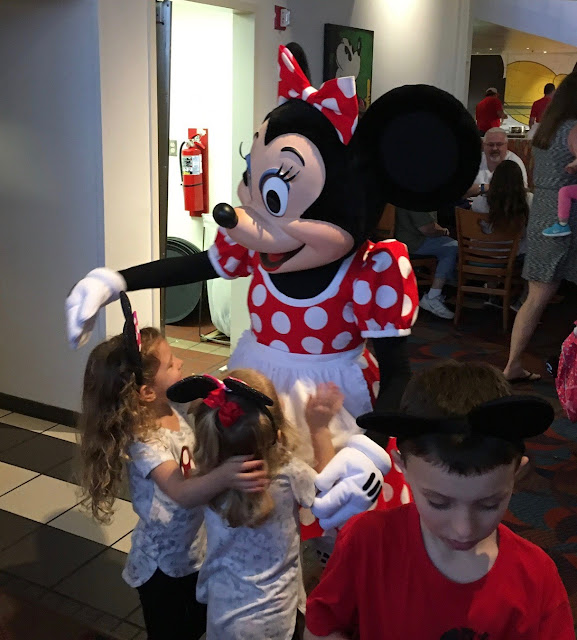 A large meal and a long day of travel meant an early bedtime for all of us. 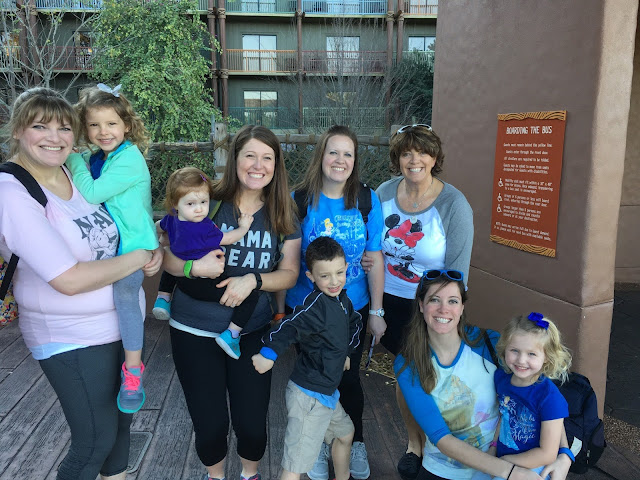 Our first park day was early at Magic Kingdom. 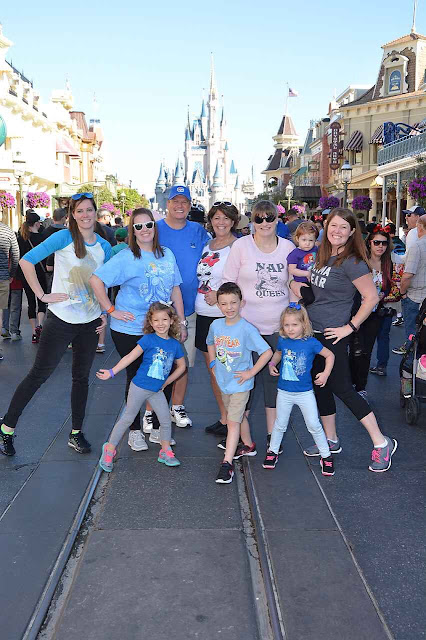 We spent the morning checking off as many rides as possible before the crowds arrived: barn stormer, tea cups, Big Thunder, Dumbo, Seven Dwarfs Mine Train, Peter Pan, 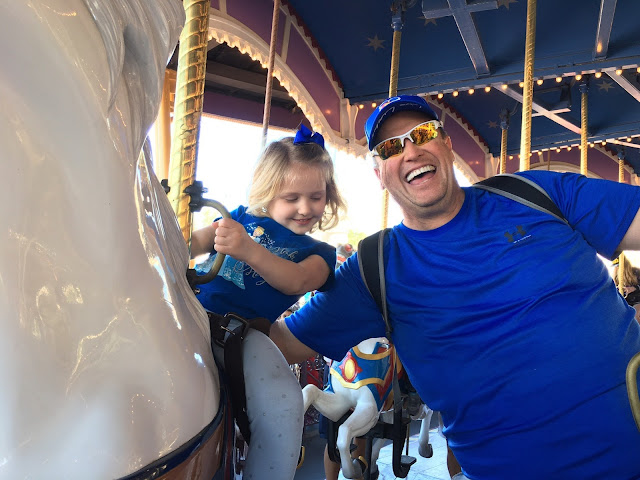 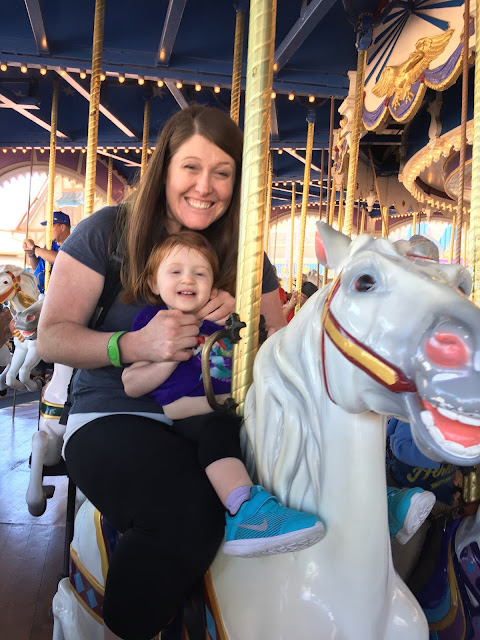 and even had a character experience with Belle’s story (which Ina says was her favorite thing we did the whole time we were there!). 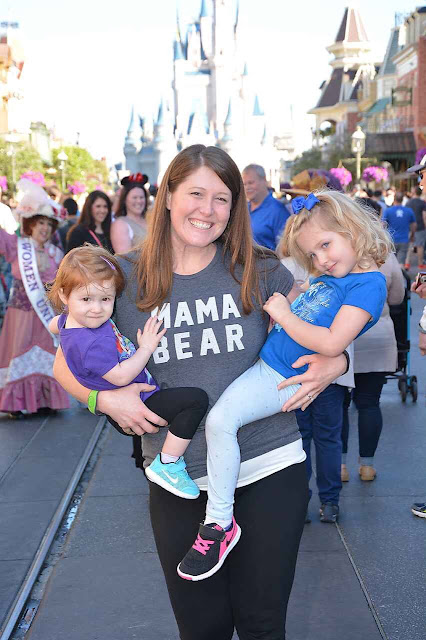 We had lunch at Cinderella’s castle, 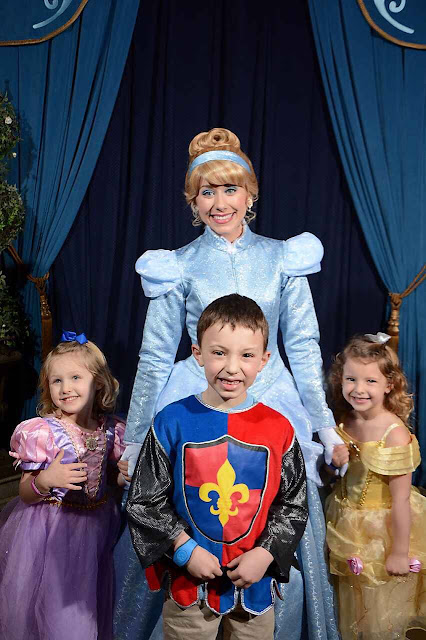 which was pretty fancy. Of course we were all exciting to get more one on one time with each princess. 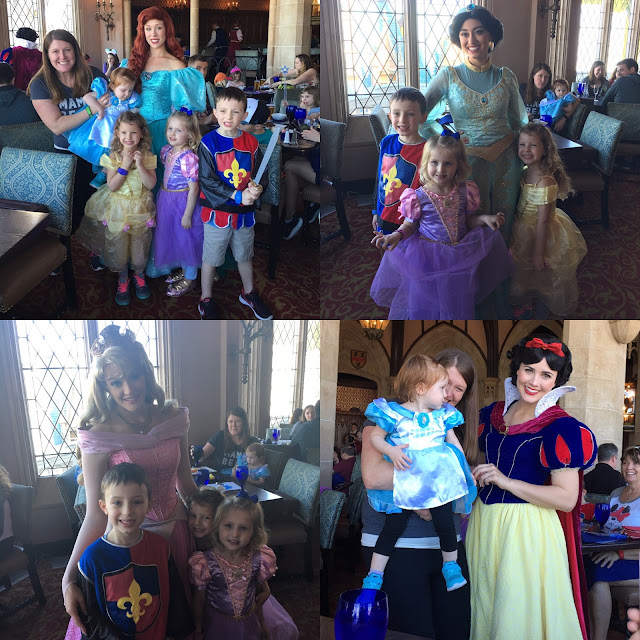 After lunch we hit up more rides: The Magic Carpets of Alladin, It’s a Small World, Buzz Lighyear’s Space Ranger (twice), and Ariel’s Grotto. We also paused at three to watch the parade, which was absolutely fantastic and my favorite thing about Magic Kingdom, well, except for the fireworks. 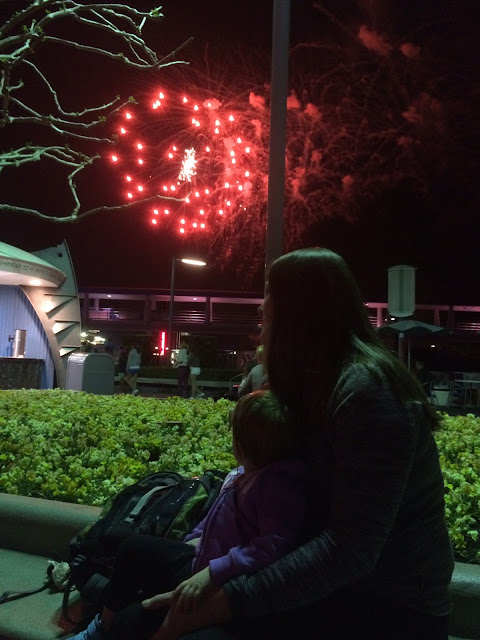 We chose to watch the fireworks from a distance, while enjoying some ice cream. This gave the girls a chance to don their princess dresses and dance like royalty under the light of the fireworks to Disney music. Ina was dancing with Kauffman and soon my uncle was dancing with Halllaway. I’d be lying if I said I didn’t shed a few tears. It was a pretty darn cool experience. 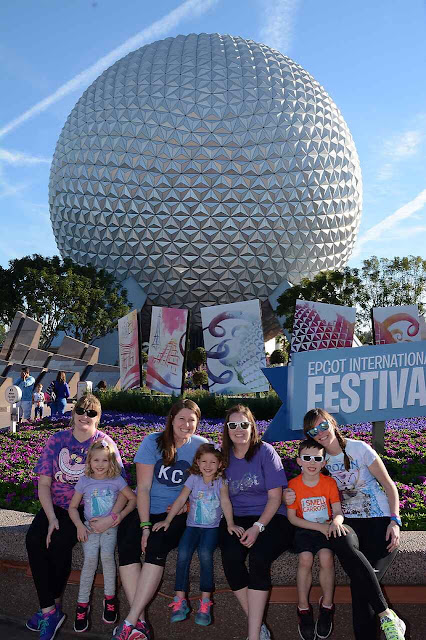 Friday morning we headed to Epcot bright and early. We immediately ran to Soarin’, which was one of the coolest rides of the week. At Epcot we also tasted the different sodas at Cool Factory, met some characters, 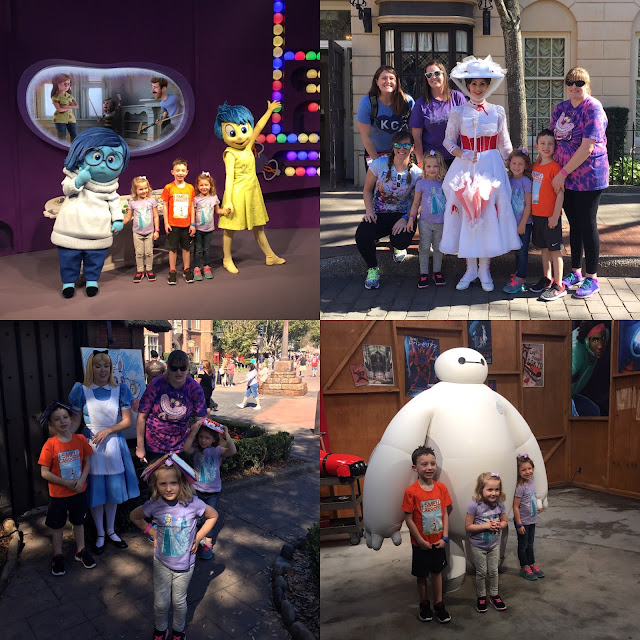 tasted some food from around the world (empanadas, churros, and French ice cream), and road Test Track, another really, really cool ride. 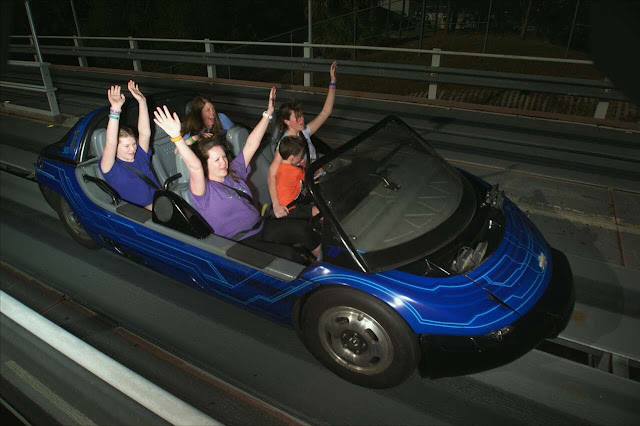 But I have to say the highlight of Epcot was meeting Anna and Elsa and riding the Frozen ride, which was fantastic.
Even though the girls had met so many princesses already, it was obvious from their excitement that Anna and Elsa were different. They kept a full conversation with them for five minutes and I admit, a few tears came to my eyes (again) when I saw just how happy Ina was. 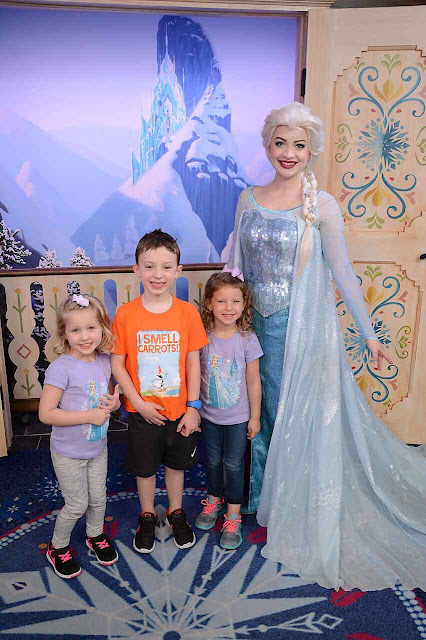 After Epcot we headed back over to Magic Kingdom to finish up a few things we didn’t get to do the day before: meeting Tiana and Rapunzel, riding The Pirates of the Caribbean, and riding Buzz Lightyear and Ariel’s Under the Sea again. This was our latest night and by the time we got to our car I was so, so happy to sit down.

Saturday morning started at Hollywood Studios before the park opened to stand in line for Jedi Training, which was hands down my favorite part of the trip. The Star Wars attractions at Hollywood were absolutely fantastic-the ride was awesome, the shows were entertaining, meeting the characters was fun/scary, but the best was Jedi Training. 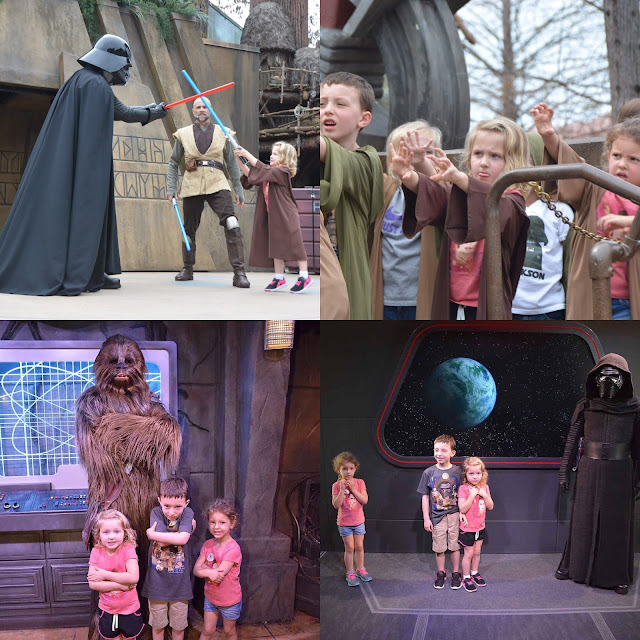 If your kids like Star Wars at all this is a must do. It starts with a “show” and the Master Jedi trains the kids. Then, danger is sensed and Darth Vader appears and each kid gets the opportunity to fight him. Then he retreats and they think that have won until Kylo Ren appears, who, at least in Ina’s eyes , is much scarier than Vader. The training Jedi fights him, but in the end it takes everyone using “The Force” to get him to retreat. Seriously fantastic.

Our last day at the Parks was at Universal Studios, which mainly focused on Harry Potter World, which was also fantastic. Seeing the Harry Potter world come to life in front of me was an exciting experience for this HP fan. As soon as we entered Diagon Alley, our first order of business was tasting a butter beer. It was delicious and pretty much exactly how I expected it to taste. While we enjoyed our butter beers the kids munched on chocolate frogs. 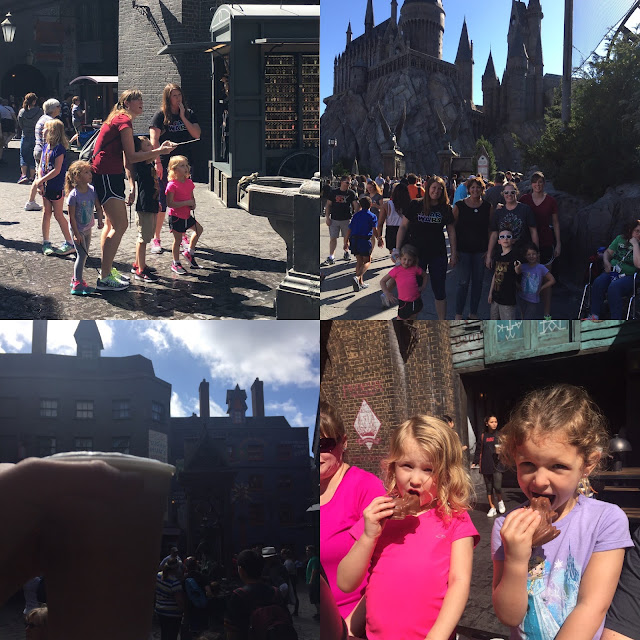 Next we visited Olivander’s wand shop where the kids each selected an interactive wand. This wand allowed them to perform “magic” around the park, which they really enjoyed. Ina is still carrying her wand around at home.

We hopped on The Hogwart’s Express to Hogsmeade, where we at lunch at The Three Broomsticks. After lunch my aunt and I rode the Quidditch ride (my favorite ride of the week) and the kids rode Flight of the Hippogriff.

After the rides we were pretty worn out, so we decided to call it an early night and go back to our hotel to swim, which was a great way to end the trip.

We had a fantastic time and are unbelievably thankful to get the opportunity to go on such a great trip!

Some things I would recommend for Disney: using Magic Bands, getting the photo pass, bringing/renting strollers (even for bigger kids), packing lots of snacks, and wearing comfortable clothes and shoes. Also, if at all possible, bring more adults than children and have someone else plan your trip. Ha! :)

Until next time!
Posted by Racheal at Thursday, February 23, 2017