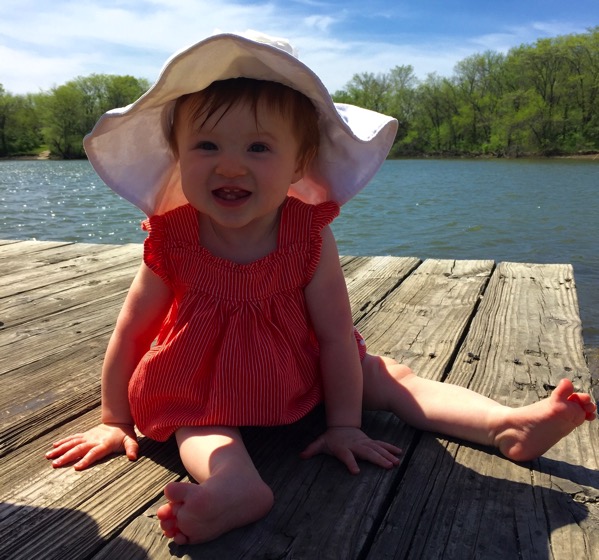 1. Crawling. Cora is officially on the move. She isn’t very coordinated about it and isn’t very fast. She sometimes uses her knees and sometimes crawls while on her feet gorilla-style, but she can get where she wants to if she wants to bad enough. Time to re-install the baby gate.

2. Teeth. She has four - two on the bottom and two on top and she knows how to use them. I almost thought I was going to ween her, but then she came to her senses and stopped biting anything that passed her lips.

3. Sleeping through the night. A few weeks ago at a doctor’s appointment for Ina I mentioned how Cora was not sleeping and still getting up to nurse at least 2, but usually 3 to 4, times per night. Also, once she was finished eating, she couldn’t be put back to sleep unless I laid down with her in our guest bed. Her doctor immediately told me that this craziness had to stop and I agreed. We set up a “boot-camp” type plan that involves crying it out. Although it was super tough, after just 3 nights she is now sleeping through the night. She still has to cry to initially fall asleep, but once she is asleep, she stays that way for a good 10 hours. Watch out world, I am rested. 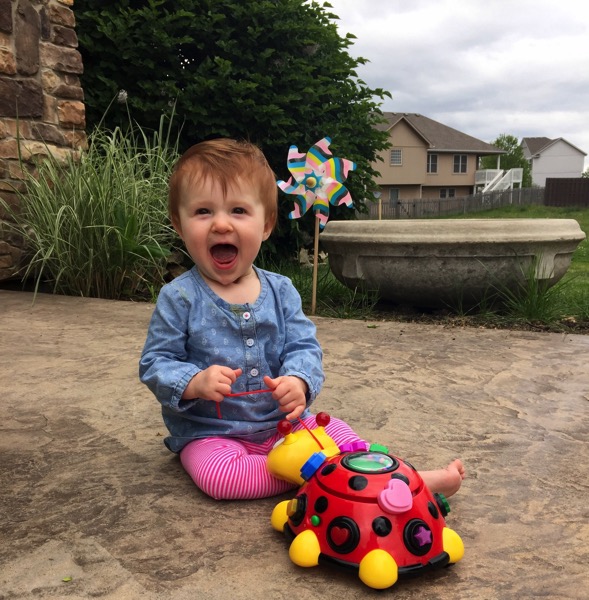 4. Her tongue: sticking it out, all the time, particularly when she is trying hard to do something, just like her big sister did at this age.

5. Eating. Everything. Seriously, this child is the first one to start eating dinner (Cheerios while we set the table) and is still opening her mouth as wide as can be just in case a spoon should happen to enter when everyone else is done. She will eat anything we give her and I really can’t tell if she likes one thing over another. We give her oatmeal/applesauce and some other type of veggies for two meals out of the day, along with anything any of us I happen to be eating while she is around.

Weirdly, although she eats a ton of food and still nurses 4(ish) times a day, she didn’t gain any weight from 6 to 9 months. Her doctor wasn’t too concerned about this though.

6. Hugging. When I pick Cora up, she hugs me. It is the cutest thing. She wraps her right arm all the way around my neck and pulls me in. Then, after a few seconds, she releases that and takes her left hand and pinches the “extra skin” under my right arm to hold on.

7. Sounds. At 9 months she is already a little chatter box and says, “Ma-ma, Da-Da, Bub-Bub, and lots of clicking noises.”

8. Her red hair. Before Cora was born, Dan really wanted to name her Ginger. I agree it is a pretty name, but I am thankful we didn’t, as it seems her red hair is here to stay. Or at least I hope it is! It is a beautiful, deep, shiny red and everyone comments on it. I can almost pull the front into a teeny tiny ponytail. 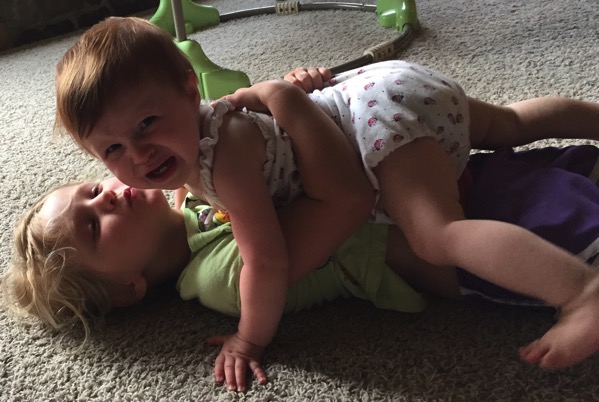 9. Sisterly love. This girl LOVES her big sister. I often see her just staring lovingly at Ina while Ina is playing or talking. The best is when Ina “plays” with Cora and the giggles these two girls make together are music to my ears. Dan and I sometimes just sit and watch them play. They typically get along pretty well, until Ina squeezes Cora too hard or knocks her over or hits her with a toy. I have a feeling that paybacks are coming pretty soon and the other day I couldn’t stop laughing when Ina was attempting to put a puzzle together on the floor and Cora kept on crawling over and grabbing a piece, only to have Ina take it away from her immediately. Cora didn’t seem phased and continued to grab another piece, then Ina would take it away. This cycle went on for about 10 minutes. It was like I was looking into my future for the next 16 years.