When I saw that Strategy Two in Fervent was on focus, I thought I was going to learn ways to become less distracted and more productive and efficient.  I suppose I was kind of right, but in the wrong way. 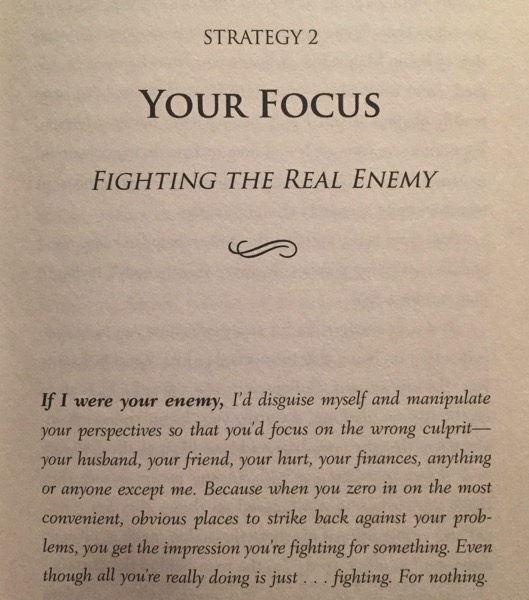 I am going to admit right now that although I am a Christian and believe that Satan exists, until very recently I never really considered his impact on my day to day life. When bad things happened in my life, I always blamed myself, other people, or other things. However, after reading more and more scripture, I have learned that many (most? all?) times Satan is at work in my struggles. In your struggles.

So, instead of fighting yourself or someone else or something else, fight him.

This sounds like a good plan in theory, except I have tried it out, and it is hard to follow through. It is so much easier to be fight the person in front of you than someone you can’t see. In the heat of an angry moment it is hard to remember who to fight. And, when you do remember, it is hard to implement.

However, Shire painted this word picture for me on page 45:

"Success, to him means stirring up discord in your home, your church, your workplace, your neighborhood, and doing it in such a way that no one’s even aware he’s been in the building. He knows our natural, physical response is to start coming after each other instead of him - attacking, counterattacking, pointing fingers, assigning blame - while he sits out in the driveway monitoring the clamor inside, fiendishly rubbing his hands together, admiring just how adept he is…and what easy targets we are."

I am a visual person, and once I started picturing Satan out in my driveway rubbing his hands together, I had someone to fight. This was a game changer. This made me mad. Angry. Not at anyone else, but at Satan.

And not only that, when I took the focus of anger with myself or someone else off of them and on to Satan, what was left was a victim. Someone who was being attacked. Someone I was no longer mad at, but someone I had grace, love, and protection for. Someone I could fight for instead of against.

Here is an example of a prayer I had on focus:

(P): God, thank you for the amazing love you are that you have filled me with and surround me with. You are such a good father and I feel so blessed to be your child.

(R): Forgive me for not focusing on the true real enemy before now. I was distracted, but even when I knew Satan was the one to blame, I still blamed someone or something else. Why? Because it is easier or maybe even temporarily feels better? Man, he is good. BUT, you are better.

(A): Please fill me with your spirit and give me the weapons I need to fight him. Show me the enemy is behind my problems. Help me see through his curtains to the truth behind the struggles in my life. I know I already have victory through Jesus, but help me fight the battle.

(Y): God, rise up in my life. Scatter your enemies. Let those that hate you flee from my life*. Don’t let their influent be in my life anymore.