Once everyone agreed I was actually in labor, things progressed pretty quickly. I was admitted to a room, where a flurry of people ran in and out, all while I was having contractions every 2 to 3 minutes and continued to dry heave. My plan had always been to politely say, “Yes please” the minute someone offered me an epidural, and nothing about that changed when I could barely handle being dilated to a 2. Ha! So, as soon as humanly possible, I was given an epidural, after which I did not feel one ounce of discomfort. Seriously, the rest of the day was so nice and enjoyable.

I was also given ampicillin, an antibiotic that I needed because I was Group B positive. They need to give two doses of the antibiotic 4 hours apart, so I knew they weren’t going to do anything to speed things along until I was almost ready for my second dose.

I was admitted around 10:30 AM. We started calling family to let them know we were in the hospital and likely going to have a baby by dinner time. My sister arrived (she used to be a labor and delivery nurse, and she has been so supportive of me during this pregnancy, so I wanted her in the room with me). By the time she was there, everyone was calm, cool, and collected.

The rest of the day went really smoothly. My sister, Dan, Jeane and I sort of “hung out” in my room, just waiting for my labor to progress. Jeane was on call that day and didn’t have much else going on, so we luckily got the one-on-one royal treatment. They continued to move me in different positions to help the baby move down. They tried sitting me up, but I soon became dizzy and my blood pressure dropped. So, I mostly flipped from one side to the other with his huge blown up peanut type thing in between my legs. 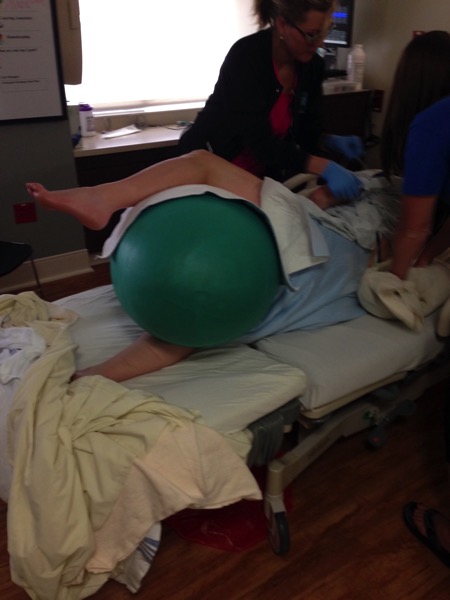 [Sorry, I had to include that picture for a visual]

Around 2, I was dilated to a 6 and Jeane broke my water. Doing this told us two things - 1. this baby had a lot of hair and 2. she stooled in utero, which is pretty common for a 41 week baby. But, because of the meconium, we had to follow different precautions, like having the NICU team in my room when she came out, just in case she didn’t cry and they needed to suck some gunk out of her lungs.

Around 2:30 I received my second ampicillin dose, which meant it would be fine to have the baby. The only “complication” from then on out was that my contractions weren’t being picked up on the monitor, so they had to use an intra-uterine monitor.

Before I knew it, I was feeling a slight pressure to push and sure enough I was dilated to a 10! Dan held one leg, my sister held another, and it was time to push. My sister had warned me that if the pushing didn’t go well that they might dial down the epidural, which was the last thing I wanted. So, I made sure to push my heart out every time they told me to. After the first push everyone in the room seemed to be impressed with the progress. Everyone was so encouraging and all it took was pushing through 6 contractions for about 15 minutes and out she came screaming like crazy. (Because she screamed, there was no need for the NICU team, so they left.) 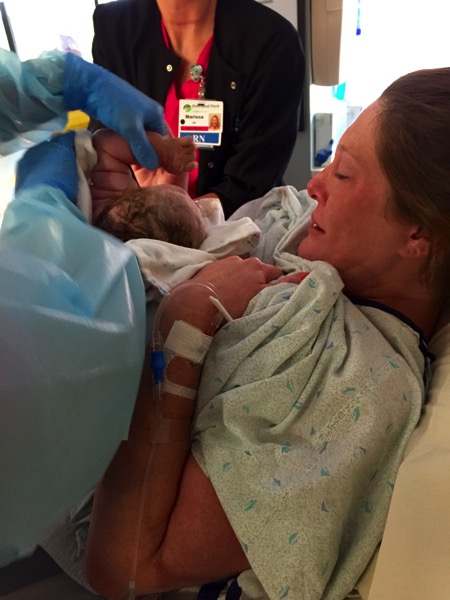 They immediately put her on my chest, and I immediately cried like a baby, the rush of emotions was seriously unread. Then I cuddled her for a few minutes and then attempted to nurse, which worked out pretty well. She was covered in gunk, but still one of the most beautiful things I had ever seen.  Dan was pretty excited to see her too. 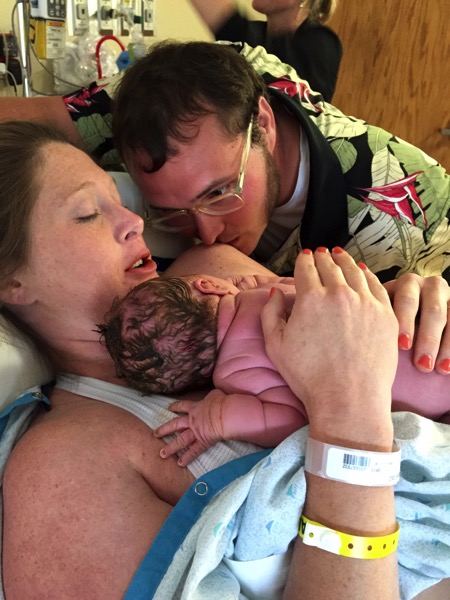 I should note here that Dan was awesome through the entire delivery process. He was front and center while pushing, and wanted to catch Cora, but because of the meconium, Jeane had to do it instead. He settled for cutting the cord.

Even though the baby was out, there was still a lot of work to be done. I tore, so I needed to be stitched up in 3 different places. Also, apparently my uterus stopped contracting, and I started loosing a lot of blood. This made the tension in the room a little higher, but after a few medications, some massaging, and a lot of towels, I was good to go.

As soon as everything was cleaned up, Dan went to the waiting room to get Ina. I will never forget the excitement on her face when she met her baby sister. That moment was so awesome - this is our family.

After looking at her for all of a minute, Ina wanted to go back to the waiting room to get the present she brought for her baby sister.

Soon everyone else came in the room, and things became a little blurry to me. Because of my blood loss, I was pretty out of it. I felt like there was a space between me and what was going on around me that I couldn’t cross. But, I do remember a huge room full of people very excited to meet Cora! 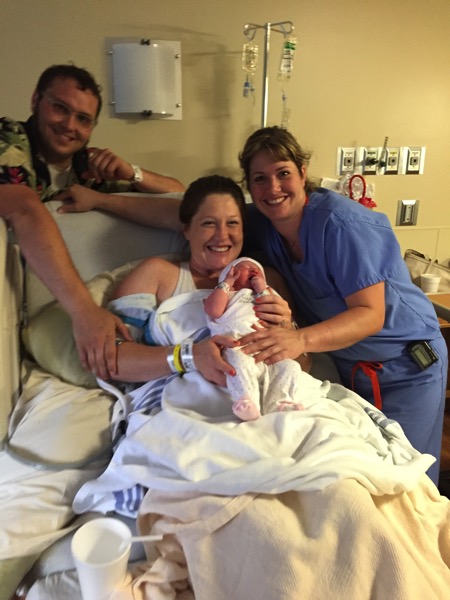 We stayed in the hospital that night and the next, and then were home before noon on Monday!

Now Cora is 9 days old, and in many ways it is hard to imagine our family without her. A few general updates:

Our front door has been revolving since Monday morning. It has been lovely to see so many people, but we are also pretty tired by the end of the day. I suppose having so many people who love us is a wonderful problem to have. Ha! However, I do think we are going to take it a little easier the next few days, because a few days ago Ina told us, “I don’t want anyone else to come over.”

I think she was sick of having to share her toys. Little does she know that problem is only going to get worse.

The first 4 days of Cora’s life were pretty rough. She was fine to sleep all day long, but as soon as I shut the lights off to go to sleep, she would start wailing. She also woke up every 1 or 2 hours to eat. I was starting to get concerned, but then I tried a swaddle wrap that we received as a gift with Ina but never really used, and she slept from 9 to 1 and then until 4. I can totally handle getting up only twice in the night and we have been using the swaddle wrap every night since then with continued success.

Now the only problem I have is that once she is done eating, she looks so cute and cuddly and peaceful that I want to stay up and stare at her. It is really our only time by ourselves, so I do take advantage of it and don’t get much sleep in between the two night feedings.

Cora is a rockstar eater. She latched on within minutes of being born and has had quite the appetite since. We did have a few difficult nursing sessions in the beginning, mostly because she didn’t like one side. One night in the hospital she screamed at me for an hour while I attempted to get her to latch. Now, the only problem we might have is that she nurses too much. If she is awake, she wants to be eating, which I can hardly blame her for. She was a big baby and she needs the nourishment to keep up her size.

She also falls asleep while nursing a lot, so many times I will feed her and then turn around to do it again 30 minutes later because she didn’t get all she wanted the first time. Dan gets after me for spoiling her, and I know this isn’t something I can easily maintain, but for now she gets what she wants. Ha!

Ina is loving having a little sister. So far. She cuddles and kisses her often and wants to make sure we take “her baby” with us wherever we go. I have to watch myself, because I am always on guard, making sure Ina doesn’t squeeze her sister too tight or share something with her that she shouldn’t. 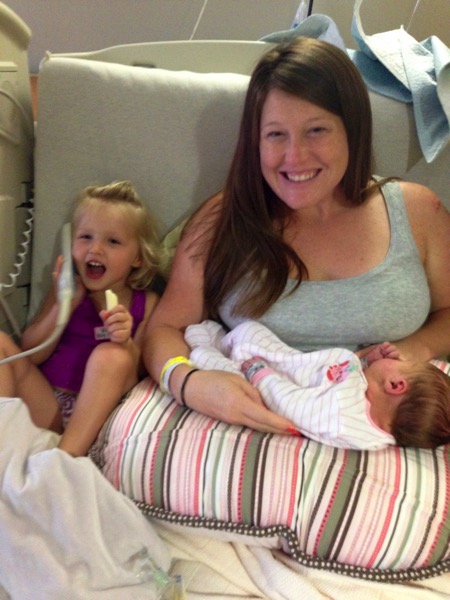 I can’t wait to watch them grow up together.

Nine days out and I am still is quite a bit of pain. I suppose this is normal? With my C-section, I know I was feeling pretty good 9 days later, but things were a lot different then. I was in the hospital for a week with Ina, and less than 48 hours with Cora. This time I also have a toddler to take care of. Also have a slight problem sitting still. Yesterday we went to our friend Silo’s birthday party at a splash park and I couldn’t resist running through the water with Ina a few times. 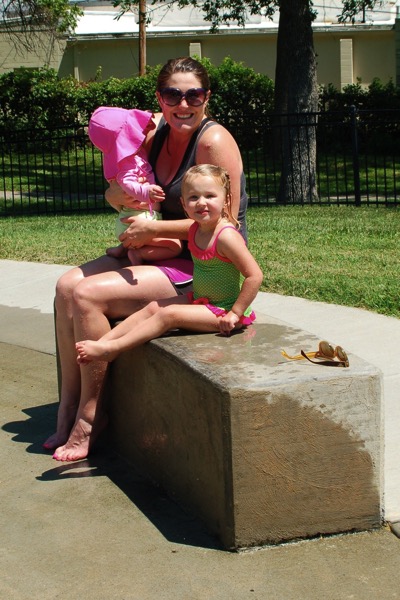 Ina had a blast. 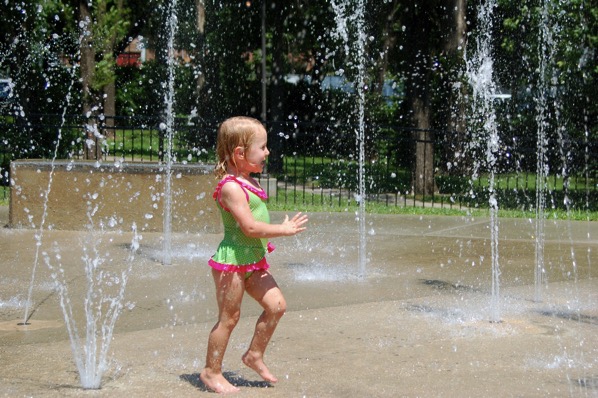 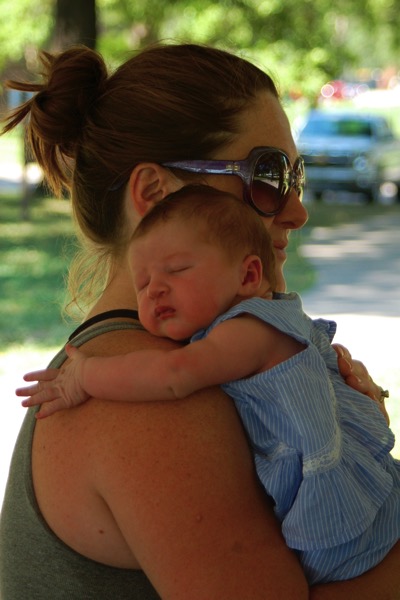 So, I plan to take it very easy over the next few days in hopes that my recovery will speed along.

OK, now that I have written a short book, I hope to be able to post at least every other day. Thanks for following our (slightly bigger) little family! <3