This post has been a long time coming, and is very weird to write, because Weight Watchers was such a big part of my life for a very long time.  But, it isn’t anymore, and because at one time I said that I would always do Weight Watchers, and because a lot of my readers (who aren’t my mom) follow me because of the Weight Watchers information I used to provide, I feel I owe you an explanation.  However, like most explanations, it is a long and complicated one. 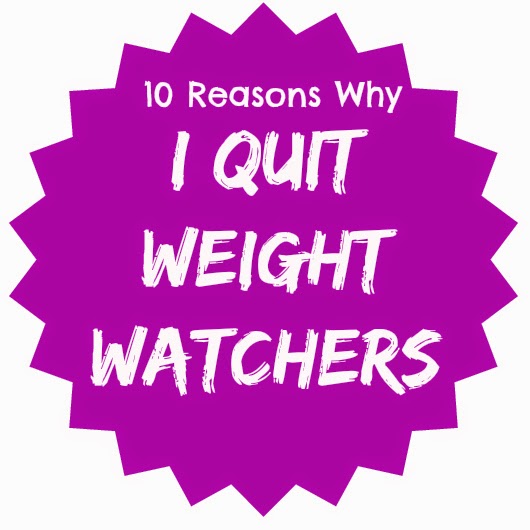 Before I go on, if you are currently a successful Weight Watchers member, please don’t feel like I am trying to convince you to quit.  These are reasons why I stopped, but that doesn’t mean you have to.  If you feel the program is working for you, then by all means, keep on chugging along.  But, if you are a Weight Watcher member who is struggling, please read and consider what I have to say, because there is another, and, in my opinion, easier, way.

I absolutely loved my leader and the members at my meeting.  They are amazing people and I miss them dearly.

However, my time became a lot more precious to me when Ina came along.  All of a sudden, my 30 minute meeting that was 30 minutes away was taking a hour and a half out of my already tight schedule.  At first I justified it by saying I was taking that time to take care of myself.  However, I soon realized that in 1.5 hours I could squeeze in a really long run plus a shower alone, which is also taking care of myself.

2. The points system didn’t work for me

I like to think of myself as a smart, organized, and competent person.  However, there is a level of information overload that every brain has, and by dinner time mine has reached it almost every day. I remember trying with all my might to think about what I had hurriedly shoved in my mouth between work and mothering, trying to add that to my nursing for the day, and figure out how many points I had earned while exercising, and finally giving up.  This ended up being good because I switched to Simply Filling, Weight Watcher's other plan, which transitioned me to where I am today (see next point).

Also, the points system takes away from intuitive eating.  There were some days when I was starving, but out of points, so I didn’t eat and other days when I ate without being hungry because I had extra points and both actions make zero sense.

Switching to Simply Filling was huge for me because I learned that I could eat (real, whole, clean) food without calculating points and not gain weight.  Seriously, this was life changing.  However, I felt there were still many limitations to Simply Filling, some of which are a focus on artificial sweeteners, not enough oils, and still having to calculate / track non-“sampling filling” foods.

I remember one of the last meetings I went to, someone was telling a story about going to an airport and getting a snack. The hummus was more points than a bag of chips, so she went with the chips.  Hearing that story made me realize that something is wrong with a plan that would lead people to choose processed crap over whole food because of its lower points value.

Also, once I realized how much better I felt eating clean food, I became very frustrated when members would bring in a new food to tell us about that had zero nutritional value and would leave me completely starving in an hour, but was noteworthy in the meeting because it was only 1 point.

4. I no longer think weight is the most important thing to “watch"

Weight is just a number (that can fluctuate drastically in one day) and not very reflective of how healthy a person is.  I used to try to control weight fluctuations by not eating salt, not drinking water, or running before I weighed-in, which sometimes seemed silly, but if I didn’t do it, I would “gain weight” which would impact my mood.

One or two pounds would put me in a mad mood (for the hour, day, or sometimes even week)  and is not worth it to me.

I find that if I focus more on planning my exercise and meals for the week, I don’t need to weigh myself every week. Obviously, not having any form of measurement could lead to a slippery slope, so I gauge my success by how my clothes fit.  Currently, my clothes fit, so I am happy with that.

5. Hearing people talk bad about themselves is hard for me to hear.

I completely understand that Weight Watcher meetings are designed for people to discuss their frustrations with their weight.  However, I recently discovered that listening to people talk bad about themselves really impacted my mood and even the way I felt about myself.  I really feed off of others’ energy, and listening to a woman say she “lost control” or “felt so gross” was hard on me.  Obviously it happens, to everyone, including me, but hearing it every week was starting to build up.

There were many days when following the points+ plan and even the simply filling plan, when I was hungry.  Hungry because I was a nursing, half marathon training mom.  I often experienced low blood sugar between meals, even when I tried to disperse my points out in snacks throughout the day.

The one change drastic change I have made since quitting Weight Watchers is an increase in my fat intake.  I eat a lot of fat now in the form of nuts (oh walnuts, I love you), nut butters, coconut oil, olive oil, and seeds.  Since this change, my low blood sugar has virtually disappeared, my hair is shinier, and my nails are stronger.  I also feel more satisfied after every meal.

You have no idea how freeing it is to drizzle out olive oil into a pan without measuring it.  Try it.

7. The plan doesn’t fully transition into a lifestyle

Weight Watchers touts the slogan, “This isn’t a diet, it is a lifestyle,” and I was right along with them, saying over and over again that this was truly a lifestyle.

But I was wrong. Although most of the time I counted points, there were many times that I didn’t - weekends, vacations, weeks I didn’t want to weigh in, etc.  I don’t think I was alone in this, as I saw many other members do the same thing.

Why did I (and other members) do that?  Because there are days in our lives where counting points isn’t realistic, which means this isn’t really a lifestyle.

When I didn’t count points, I felt like I had failed, regardless of what I ate.  That feeling of failure led to feeling out of control, which sometimes led to overeating crap.

Although the Weight Watchers plan allows you to “earn” activity points, I never felt like they were enough for me to fully fuel my long distance training.

9. I found The Daniel Plan

Here is the Daniel Plan in one sentence: Eat real food and exercise and use your faith, friends, and focus to help you through it.

Seriously, it is that simple.  It is that easy.  It doesn’t have to be complicated.

10. I no longer wanted to lose weight.

I can’t believe I am saying this, but I no longer feel the need to lose weight.  Do I need to lose 10 pounds to not be considered “overweight?”  Yes.

Would I look better?  Maybe.

Would I be healthier?  Happier?  Absolutely not.

I have fully accepted my body.  You should try it too.