Last night there was delicious good as far as the eye could see... 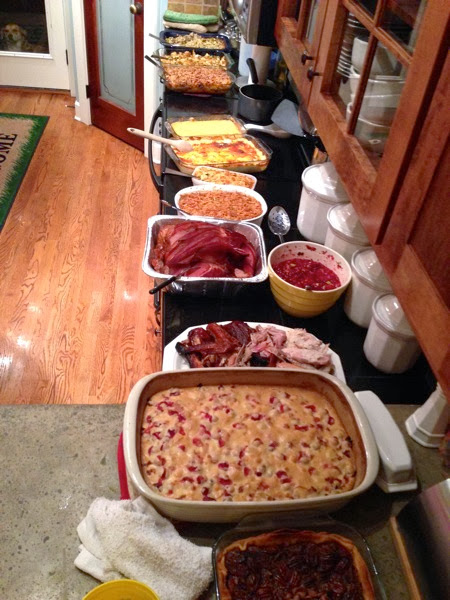 As my grandma always hosts Thanksgiving and Christmas, this was a first for me.  And although I didn't even come close to making all the food (I really don't know how she does it), it was still an awesome exeperience to have tons of people in my house celebrating the holiday.

I had a great time holding all the babies - we had 5 a year and under.

I have to admit there were a few times where I yelled, "Does anyone see Ina?!?"

That girl is so quick, she could be upstairs before we know it.  However, more often than not, she was just playing cars with the other kids.  Such a big kid.

Lastly, I want to tell a funny story about Dan.  I know that I won't be able to convey how funny it was through writing, but I want it documented here, so that in two years from now when I read this I can laugh as hard as I did last night.

Every year my grandma makes scalloped oysters for Thanksgiving and Dan loves them.  Yesterday he came home from the grocery store and told me he was going to try scalloped oysters.  I was like OK, go ahead, and went about my business cleaning the house.  He didn't make very much, so I didn't eat them during dinner and as we were cleaning up I noticed that most of the dish was left.  I asked him if he wanted me to save them and he said, "no, give them to the dogs."  I went to scoop it out and crackers just fell out of the dish.  Apparently he forgot any type of liquid and pretty much just layered crackers and oysters in a dish and put it in the oven.

I don't know why I thought that was the most hilarious thing in the world.  Bless his heart.

I hope you all have the most amazing holiday.  Muah!