Good morning and Happy Monday!  I hope you had a fantastic weekend.

Mine was filled with some sad points-my cousin Abby, Ina's nanny, (on the right) went back home to Texas for good.  We are going to miss her so much. 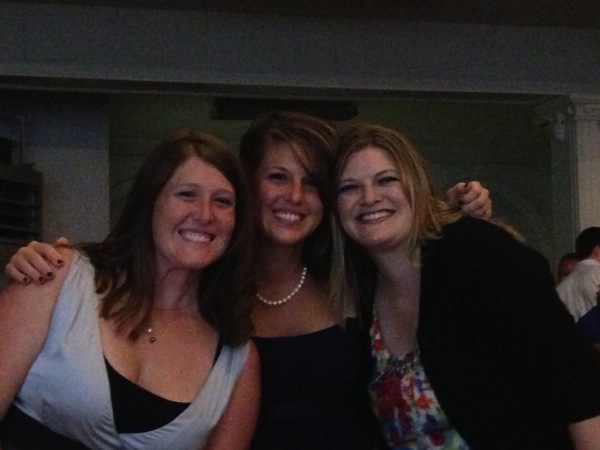 Some awkward points -I didn't know any of the songs they played at the wedding I went to, let alone all the new dances.  I mostly stayed upstairs and watched all the cool kids move until they played The Cupid Shuffle.  Ha! 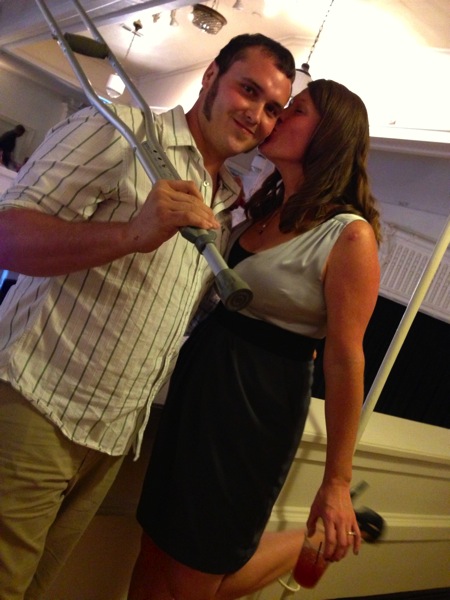 And some high points- I completed my first triathlon. 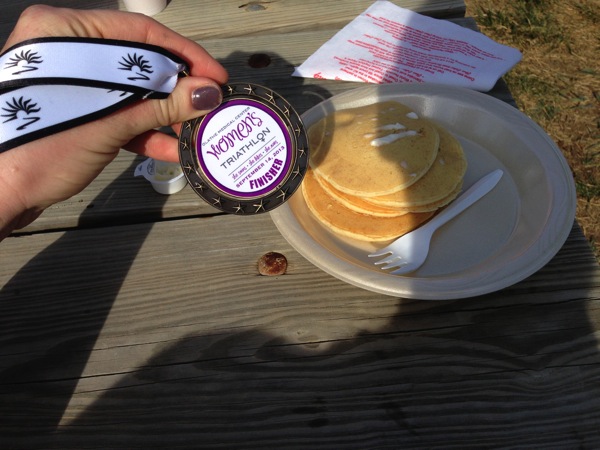 And then I ate pancakes. 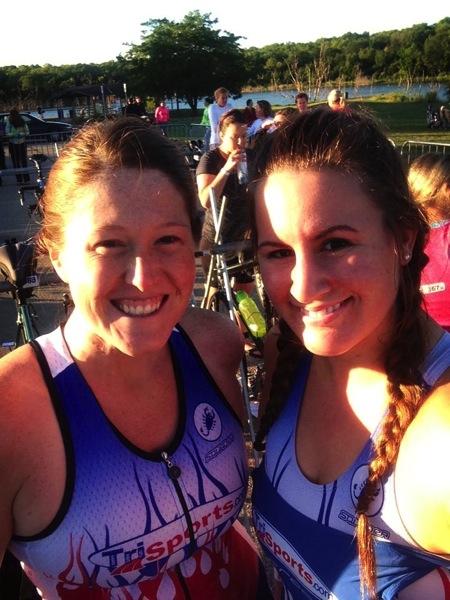 Congrats Courtney!  I can't wait to meet that baby!

Okay, now, back to the race. Here are my results, which I was super surprised by (more on that at the end). 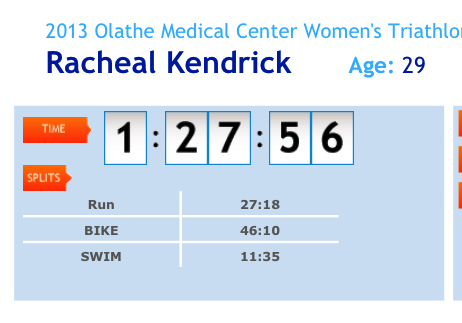 I honestly thought there was no way I was going to finish this race is less than 2 hours.  I really still don't know how I did. 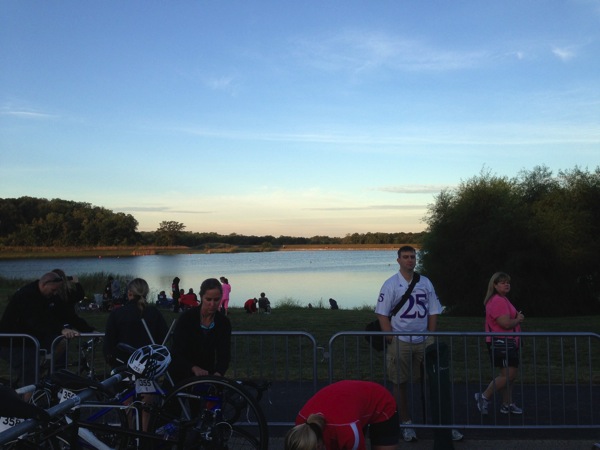 I wasn't nervous to start, probably because I was so cold.  Our age group was the last to enter the lake, and I was one of the last girls to enter the water, so I thought I wouldn't have girls swimming over the top of me.  Unfortunately, I still did, and even worse, there were three girls who formed a line I couldn't get around who kept on kicking me. 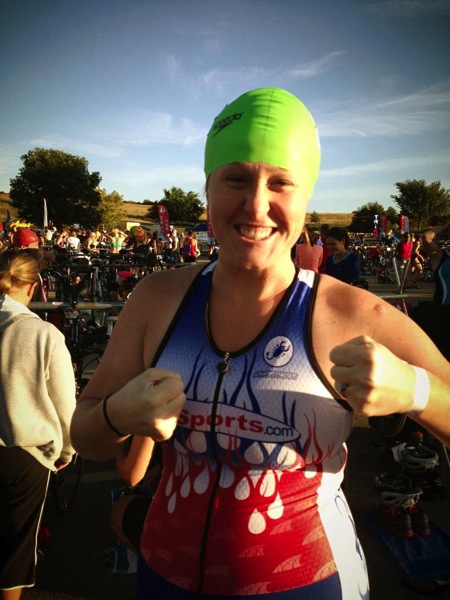 No matter which way I turned they were there, so I finally went with it.  I did breast stroke almost the entire  time because it made me uncomfortable to not see exactly where I was going.  By the time I turned the second corner, I felt comfortable enough to work my way around the line of girls and finish strong. As soon as I got out of the water I ran through a group of people, who were all sweetly cheering.  With the swim being over you couldn't wipe the smile off my face. 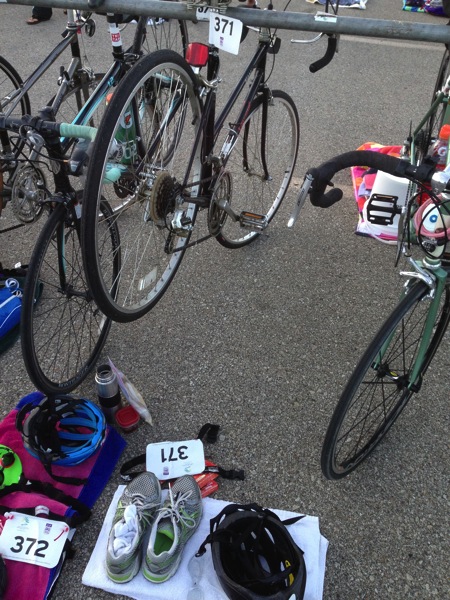 I didn't know exactly where to go and my legs were wobbly from the water as I grabbed my bike, put on helmet, shoes, and socks, and stuffed my face with some energy chews.  I also checked 10 times to make sure I had my helmet on. (Thanks to Courtney for sending me this picture and thanks to whoever took it!)

The bike was by far the hardest part for me, but that is to be expected, considering I started riding my bike 3 weeks before the race. There were lots of hills, and they got steeper as the race went on.  I pretty much stayed with the same group of women the entire time.  What I didn't expect was that the roads were still open, and the cars on the road made things kind of scary.  I was timid to pass people.  Also, because the MS-150 was biking on the opposite side of the road at the same time, it was difficult for cars to make any headway.  A truck stayed right next to me for 2 miles, which as you can imagine, put a cramp in my style.  I was so thankful to begin the ride down the hill to the transition.

Transition 2 (0:47) - This was much faster, probably because I was ready to get rid of that darn bike. 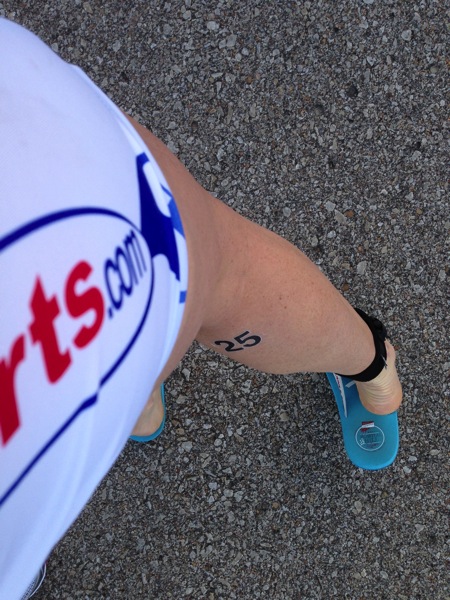 (I love all the tattoos you have to wear!)

My legs felt like jello for the first 5 minutes or so, but I just kept on moving.  I passed quite a few girls, which of course made me excited.  What was so cool about this race, was that as I passed girls, they would yell out to me, "Great job!  Keep it up!" so I started yelling it back to them.  The sense of camaraderie was great. After my legs came back to normal it was just like a typical 3 mile run to me.  Crossing the finish line was pretty darn cool.

I can't wait to sign up for next year's.  My goal is to beat my time from this year.  I also need to figure out a "place" goal, but for now I am happy to be in the top half. 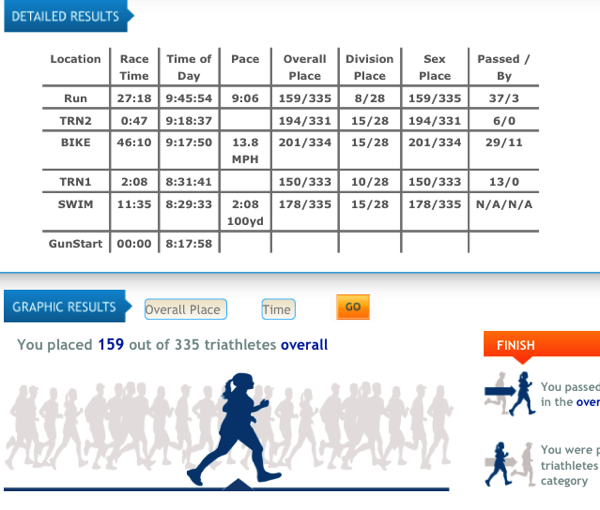 One more thing - about 3 weeks ago I was really close to not doing this race.  Really close.  I didn't have a functioning bike.  Dan had just had surgery.  Ina was not sleeping.   I had only swam a handful of times.  I didn't think I was going to be able to finish it.  Obviously, now I look back at my 3-weeks-ago self and wonder what she was thinking and how she could have possibly had that much doubt in her abilities.

Not only did I finish the race, but I think I did a pretty darn good job.

This makes me wonder how many other things I could actually do if I didn't listen to all of my self doubt and insecurities.

Have a wonderful week!