How I Lost My Baby Weight 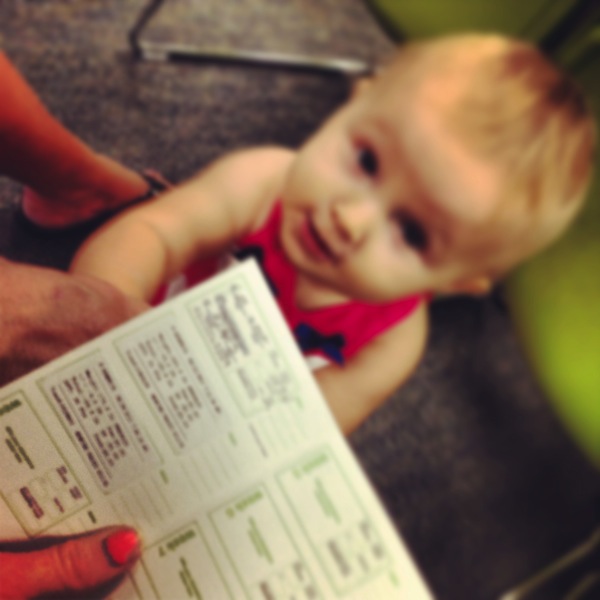 I am officially back to my pre-Ina weight!

I know I don't talk about my weight that often, but I thought it would be beneficial for other moms or mom-to-bes to discuss losing baby weight.

Because I am super cool, I made a chart showing my weight loss over time since Ina was born 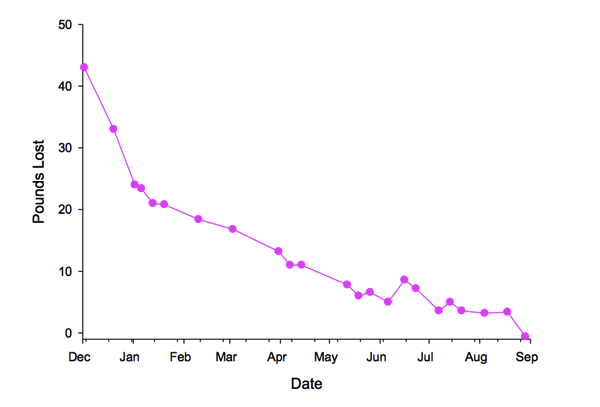 I gained 43 pounds during my pregnancy, which is more than ideal.  At my two week post-delivery appointment I had lost 13 of them, and when I started WW on Ina's one month birthday, I had 24 more pounds to go.

That is a LONG time.  I will be the first to admit that weight loss has not been my top priority over the past 9 months. What I looked like has often been the last thing on my mind, topped by almost everything else on my list of things to do in a day.

When I first started back at WW and work, I really did try to calculate all my points and watch every single thing I put in my mouth.  However, I quickly realized that something had to give.  I would be sitting there at the end of the day, trying to add up all of my points while feeding Ina and attempting to give Dan the 30 minutes a day of attention he got from me.  It was exhausting, and I couldn't stand the thought of wasting my emotional and phsical energy on something so trivial during such a valuable time in my life.  Ina was growing so fast and I didn't want to miss out on anything.

Now that I have more sleep and am a little more used to the mom routine. managing all of that has become so much easier.

Honestly, as long as I wasn't gaining weight, I was happy to let the pounds fall off as they did.  As you can see from the graph above, there were a few bumps in the road, but nothing a few good runs couldn't fix.

For what they are worth, here are a few things I did that I think helped prevent me from gaining weight.

I know, not rocket science, but still good things to point out.

The last thing I want to say is this - I know some moms who went back to their pre-baby weight in a matter of weeks.  I took 9 months.  Some might take a year and nine months.  To me, it doesn't matter how long it takes, as long as you are making an attempt to live a (mostly) healthy lifestyle and are headed in the right direction.

At the end of the day, the number on the scale means so little compared to that little baby in your arms.

This isn't the end of my weight loss.  I have 10 more pounds to go until my BMI is in a healthy range and within WW's lifetime limits.  I plan to lose those last 10 the same way I lost the baby weight - slowly.  Once I stop nursing I plan to start tracking / counting points again, but until then I will keep doing what I am doing.

Thanks to all of your for the support through this awesome, but sometimes difficult, time in our lives!  Muah!