I think I have created a monster. 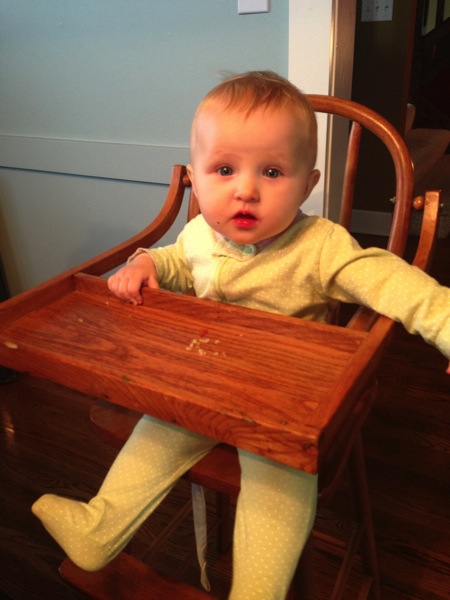 This was the only pictures the monster would let me take.

Let me back up.

I had previously mentioned that Dan and I have been giving Ina small tastes of our food while we are eating.  It started with a piece of rice here, a bit of egg yolk there.

That was a slippery slope, and over the weekend we hit the bottom.

Like whining and kicking and arms flailing as soon as she realizes that I don't have another bite ready and waiting.  I don't even want to go into what happens when I give myself a bite.

It isn't pretty.  The only way to quiet her is to give her another bite, which starts the process all over again.

When we ate dinner at my grandma's house she convinced everyone there I was starving Ina.

You would think she was strarving if you saw her last night too, but she nursed at 5, ate 3 oz of sweet potatoes at 6:30, and by 7 she wanted every bite of food on my plate. 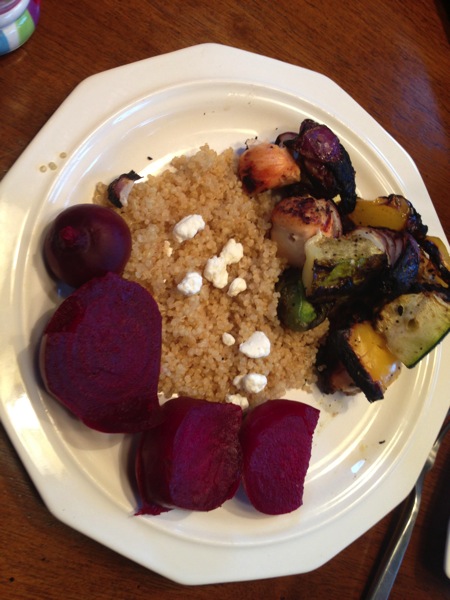 She had a taste of everything (except the goat cheese) and loved it - quinoa, beets, grilled chicken, zucchini, squash, onions, and peppers.

I swear I must have fed her two whole beets.  I finally gave her an onion to suck on so she would let me eat.

An onion.  My daughter wanted food so much that she sucked on an onion.

I have two thoughts on this:

#1 - I really don't want to encourage Ina to make that yelling / whining / screaming sound that when heard feels very similar to someone poking my eyeballs out.  However, I know she is a little young to "use her words."  Maybe I should try to encourage her to sign or give us a signal?  We tried putting the food in front of her but she doesn't have the coordination to feed herself yet.  Any advice?

#2 - This really encourages us to eat healthy.  Dan and I are pretty strong on the only-giving-Ina-healthy-food-front, so I suppose there won't be any Pop-Tarts or potato chips in our grocery cart for a while.

Have a good day!