Girls on the Run

On Wednesday after work I drove across the city to an urban elementary school for my first Girls on the Run practice.  I volunteered to be a cheer buddy for the race next weekend, was assigned to a team, and invited to a practice to meet the girls.

Have you heard of Girls on the Run?  I hadn't until I was introduced to the blog world.

For those of you who don't know, Girls on the Run is (from their website):

Girls on the Run® is a 501(c)3 non-profit organization dedicated to creating a world where every girl knows and activates her limitless potential and is free to boldly pursue her dreams.

Meeting twice a week in small teams of 8-20 girls, we teach life skills through dynamic, interactive lessons and running games. The 24-lesson curriculum is taught by certified Girls on the Run coaches and includes three parts: understanding ourselves, valuing relationships and teamwork and understanding how we connect with and shape the world at large.

Running is used to inspire and motivate girls, encourage lifelong health and fitness, and build confidence through accomplishment. Important social, psychological, and physical skills and abilities are developed and reinforced throughout the program. At each season's conclusion, the girls and their running buddies complete a 5k running event which gives them a tangible sense of achievement as well as a framework for setting and achieving life goals. The result—making the seemingly impossible, possible, and teaching girls that they can.

I had no idea what to expect as the secretary to the school buzzed me in the front door.  I randomly walked around the school and a young girl stopped as she was skipping to bathroom and asked, "Are you looking for the Girls on the Run practice?" and directed me to the gym.

As soon as I walked into the gym, I found seven girls sitting on the gym floor decorating posters.  (Not exactly what I had pictured for running practice, but I went with it.)  I was introduced as their special guest, handed a snack (Special K with dried fruit in a ziplock bag), and told to make a poster for the practice 5K the following week.  I immediately had girls handing me a pair of scissors, a marker, and some paint.

In the next hour I made eight new friends.

Kiana, who wants to start going by KK because she "needs" a nickname, shares my birthday month.  A fact she found so intriuiging that she told the coach, all the other girls, and her mom.  She also sang a song for me. A song that she found the courage to sing in front of 400 people after starting Girls on the Run.

Jessie, who loved the fact that she has the same name as my sister and had the most decorated poster. 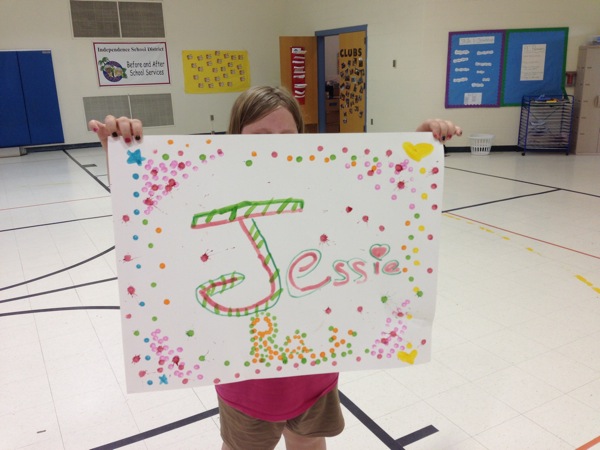 Abby, who wasn't in the gym when I arrived, but huffed in later because she had to go home to grab her running shoes.

KeKe (not to be confused with KK) and her older sister Kiya wore jeans and dress shoes to practice.  However, that didn't stop them from beating the socks off of me in my running clothes and shoes as we raced around the parking lot (no track at this school) stopping at each lap to write a positive note on their teammates posters. 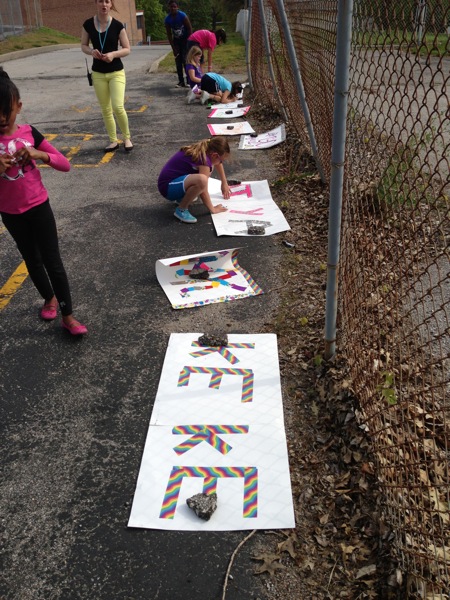 Mikia had a smart phone with an app that allowed her to take care of a baby.  We bonded over the progress our babies were making.  Her baby, Toby, can roll over and giggles when you touch his belly.  He is slightly more advanced than Ina, but I tried not to get jealous.

Trinity wore noise canceling headphones as she huffed around the parking lot.  She was in the zone.  I did stop to help her after her shoelace was stuck on the fence and talked to her about her dad and her YaYa (grandma).

Piper was the orator of the group.  At the end of the practice, we all joined hands and gave each other congratulations.  Like a politician, she started, "I want to thank both the group and some individuals..." 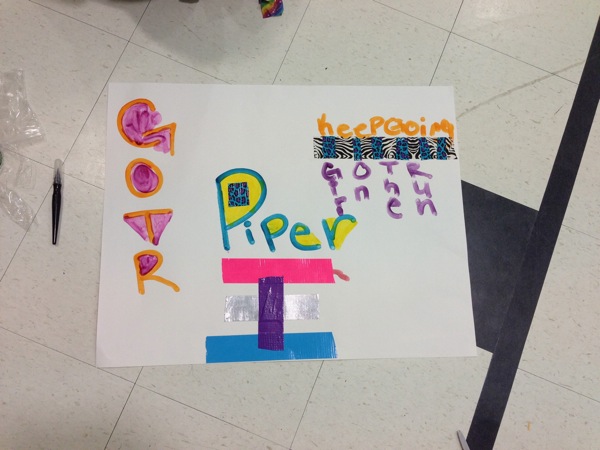 I shouldn't be surprised. Running has helped me so much, why shouldn't it help the younger generation?

I am so looking forward to the race next weekend.  This is a movement worth supporting.

I can't wait to get more involved during the Fall season.