Saturday was my first (of hopefully very many) Girls on the Run events. 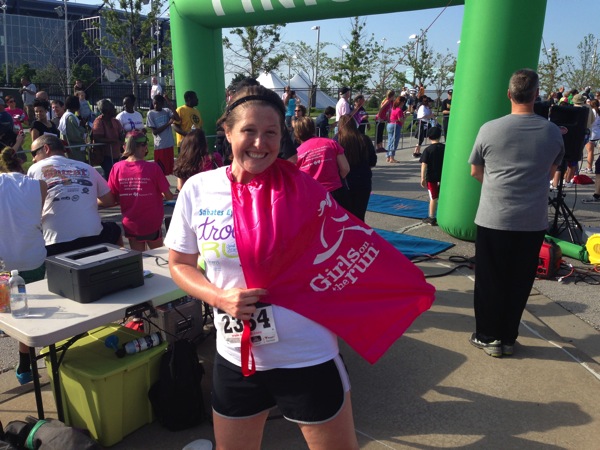 The day ended great, but started out, well, interesting.

First, Dan and I were in a tiff.  I don't remember how it started or ended, but the middle involved the task of collapsing the  BOB stroller to fit it in the back of my car.

Dan thought the wheels should come off.

After putting the wheels back on we were good to go.

As soon as we arrived at the event Ina had the biggest blowout to date.  Not kidding - the stuff was in her ears.  We had to strip her down in the parking lot. 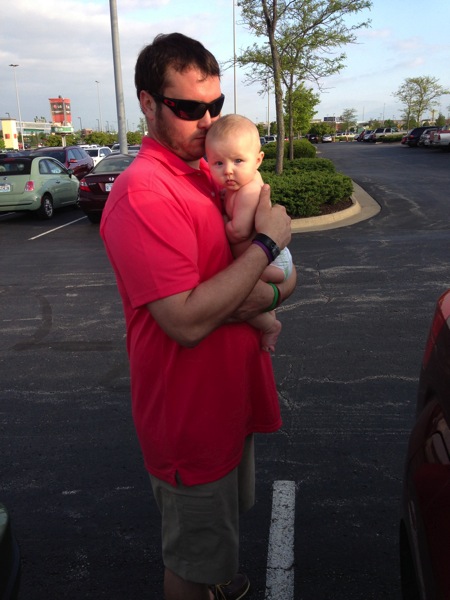 After quickly feeding Ina, picking up my packet, and saying hi to my friends Ashley and Liz I met up with my team. 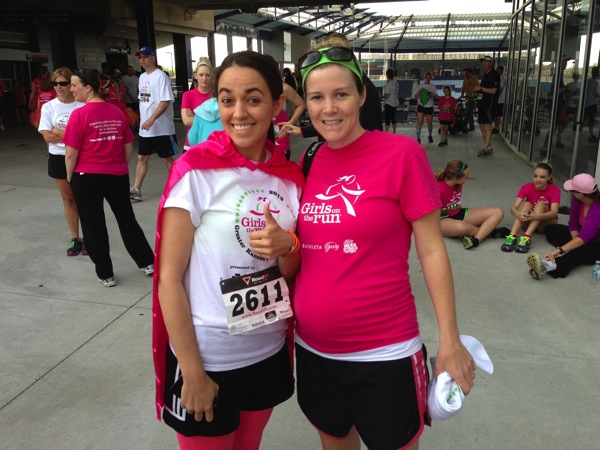 I met a new girl who I was assigned to run with and supervise before the event.  Her name was Emily.  Emily asked if she could get her hair spray painted.  I secretly wanted mine pained too, so away we went.

After waiting in line for 5 minutes Emily and I were next up.  I turned down to ask her what color she wanted to get and saw that Emily had her hand over her face and blood dripping out of it.

I almost fainted (not a blood girl) but then pulled myself together and realized she just had a bloody nose.  There was a lot of blood.  A lot.

I tried to tell her everything was going to be OK and hurried her to find the first aid station.  After asking so many people I finally found the ambulance with a few EMTs who were assigned to the race.  They helped clean her off and hold her nose, but even after 10 minutes the bleeding wasn't stopping.  One of the EMTs said something about going to the hospital.

The only thing I knew was Emily's first name.  Emily knew her last name, but not much else.  She didn't know her phone number, her address, etc.  I couldn't find her coach in the pack of people.  I slightly freaked out, but finally found the race director who was able to look up her information just as her coach happened to see us.  Whew.

Emily was a tough girl, but as soon as she saw her coach, someone she knew, she broke down in tears. Poor thing.

By this time the race had already started, but the race director instructed me to meet the race and go "randomly cheer on girls."

I met up with the race around the one mile mark and immediately had goosebumps covering my body.  There was so much excitement as girls, women, men, and the rare boy raced around me, cheering each other on.  It was so great to see everyone working together.  I loved it.

After jogging around by myself for a bit, I found a few girls who didn't have any adults with them and ran with them the rest of the way.

One of the girls was having a hard time finishing.  It was hard to know how much to push and encourage her to run.  I had already taken one kid to the ambulance, I didn't want to take another.   It didn't really matter though, because once we saw the finish line, she was a trooper and finished strong. 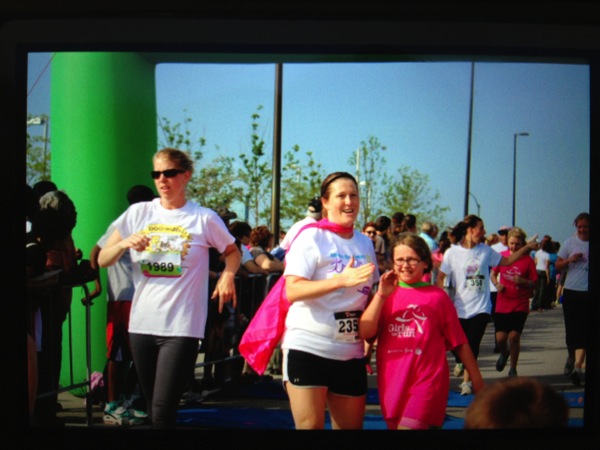 I don't have words to describe the look of excitement / accomplishment / pride she had on her face.

I can't wait until next season. Hopefully I will be able to go to a few more practices and get to know my team a little more.

If you have a GOTR around you, I would strongly encourage you to sign up / volunteer to do something.  Obviously, there is always a story to tell.