I had every intention of taking an official bump picture yesterday, but I was in my pajamas before I realized what happened. 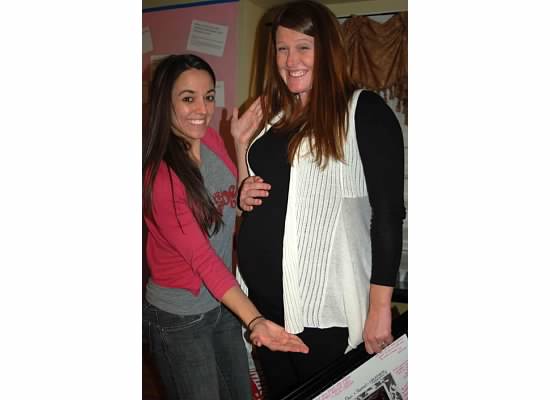 My friend Ashley is a pretty good Vanna White.

Last night Dan and I went to our first of two 2-hour breast feeding classes.  The class was great and surprisingly mature given the subject matter.  I must have reverted back to high school because every time the slides changed and a new picture popped up I expected one of the men to giggle.  However, after 2 hours worth of pictures, not one giggle crept out.

I guess none of them wanted to upset  a pregnant lady.  (Speaking of upsetting a pregnant lady, have you read this?  Whoa.  I told Dan he was lucky he voted.)

The class was very informative, and even though I have been around breastfeeding for a few years, I learned quite a bit.  Here are a few of the highlights:

- I already knew, but it was great to hear again, how much better breastfeeding is than formula feeding.  Better for the baby, better for the momma.  Cheaper.  Faster weight loss.  Better immune system.  Mother - baby bonding. Yadda yadda yadda.

- Breastfeeding isn't supposed to be painful.  Apparently, if it hurts, you are doing it wrong.  If it hurts, baby probably doesn't have a good latch.  If you can't get a good latch, call a lactation consultant.

-We learned different holding techniques.  What to do with your hands, where to hold baby, etc.  We practiced using dolls / stuffed animals we brought from home.  I brought Fredrico, the bear that Dan gave me to replace him while we lived apart for a year. 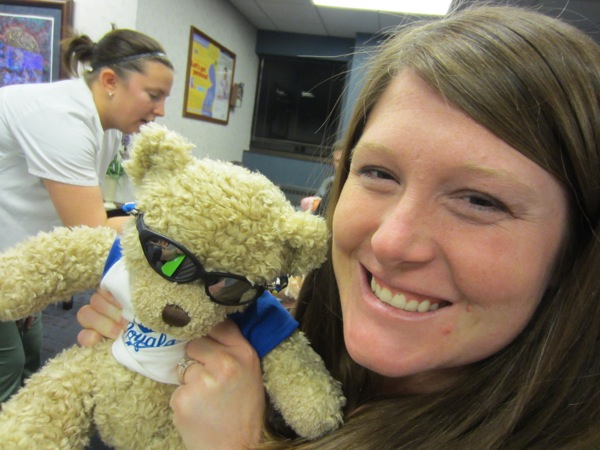 Fredrico and I got to know each other a lot better last night.

- The class reminded me I still need to buy a pump, but I am hoping to hold out until 2013, because my upgraded benefits package at work pays for "breastfeeding supplies and support."  That has got to include a pump, right?  Maybe I can rely on just a hand pump for a few days until 2013 rolls around?

- I loved hearing the reminder that in 3rd world countries, mom's don't have a choice but to breastfeed.  So, when I think it is hard and I want to quit, I need to get in that mindset and believe that I just don't have any other choice.

- The instructor was great at including the dads and letting them know what their role was in the whole process.  Obviously, there isn't much they can do, but be there for support and help to stimulate the baby.

More to come next week!