9 Weeks: My First Mother’s Day and A Big Scare

This has been a big week.  Good news first – Dan and I celebrated Mother’s Day by telling our families I am going to be a mother soon!  It was absolutely wonderful to see our mom’s open their “grandma” cards and then seeing their reactions domino through the rest of the family. 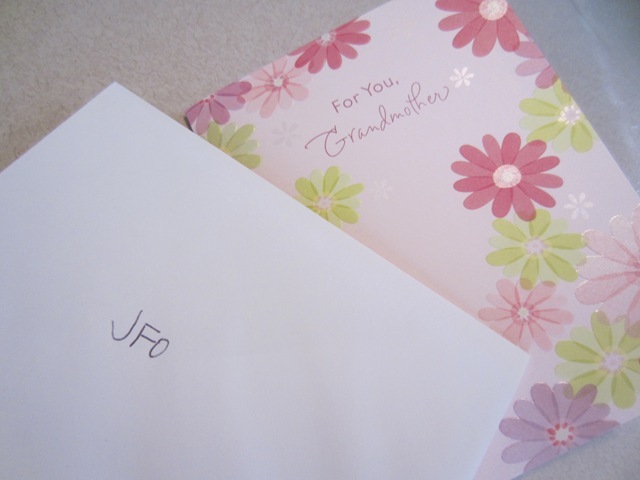 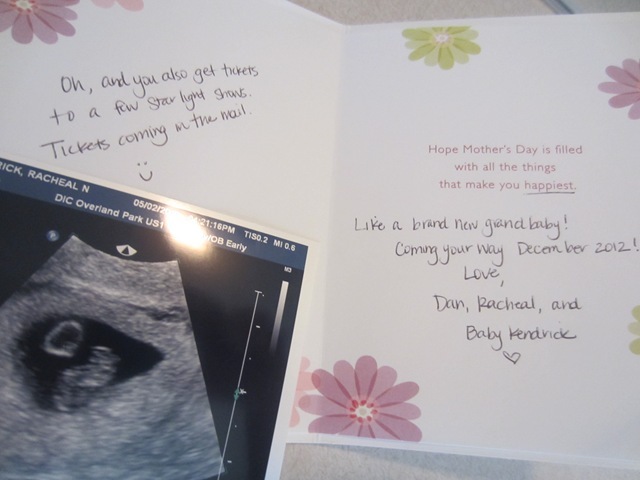 My family seemed a bit overwhelmed at first.  They just experienced the birth of Hallaway a few days before and realized they were going to go through that entire process again.  Dan’s mom said that she had given up hope on us having children – or that we knew how.  Ha!   We spent the rest of the weekend / beginning of the week telling our friends, who were all so excited.

This baby is going to be loved so much!

Now on to the most scared I have been in my entire life.

Yesterday I went to run during my lunch break and started feeling a little dizzy about 3 miles in  I stopped and tried to take a shower, but I was still dizzy, nauseous,  and could barely stand.  I composed myself enough to get in the elevator, grab my keys and phone, and drive home.  The next 8 hours were not pretty and I will spare you the details, except to say that I was experiencing some severe abdominal cramps, which made my naïve mind think that the baby was trying to exit the area.

I called my sister completely freaking out and she reassured me that everything was fine.  In fact, after I told her all of my symptoms, she said, “Yep, you sound pregnant to me.”

Luckily, I had a prenatal appointment already scheduled today.  My doctor had about the same reaction as my sister and told me that I could continue running, but I needed to listen to my body and make sure to stay hydrated.  More on that later.

However, when she went to listen to the heartbeat, there was nothing but silence.  I  don’t think I have ever prayed so hard to hear a sound in my life. I felt like my fears had come true, and prepared for the worst.  However, she just said, “Sometimes we can’t hear it at 9 weeks, but I will send you for a quick ultrasound just in case.”

I walked into the ultrasound room with heavy heart, but my mood quickly turned when the tech lubed up my belly and said, “Yep – there’s the heartbeat,” within a few seconds.  Whew.  I cried as I walked into the waiting room to make my next appointment, as I walked to my car, and on my drive home.  When I called Dan to tell him the good news he said he knew everything was fine.

Looks like I need to be a little more optimistic about this whole situation.  If everyone else can be, then so can I.  I can’t let every little thing scare me. From now on, no worries unless someone tells me I need to.

Something funny.  Dan has been sold into this Mayan calendar end of the world thing for about a year now.  He is pretty convinced that the world as we know it will stop on December 20th, 2012.  I am pretty sure that is why we have a boat.  He keeps on asking me if he can bury a semi trailer in our backyard.  He has started collecting gallons of water.  I am serious.

Anyways, he recently realized that this baby is due to be born before his proposed end of the world (December 19th).  He looked at me with the most serious face and said, “I am going to have to deliver this baby in a cave.”  Oh my.