This week I went to my first prenatal appointment.  I met with the OB coordinator / nurse practitioner, but my OB doc made sure to pop in to congratulate me with a hug!  She even remembered the conversation we had a few months ago about Dan and I starting to try and said, "See, that didn't take anytime at all.  That is how every pregnancy should be"

Once we sat down, the nurse practitioner - Kim-  was giving me a weird look and said, "Didn't I just see you?"  I said, "Yes, I am the beet girl."  She immediately started laughing.  Hehehe.

Kim gave me a packet of helpful information and reviewed all the basic need-to-knows, which I pretty much already knew through conversations with my sister and my www.babycenter.com stalking.  The two main points we focused of discussing were my running and my diet.  I will focus on those two topics later with a post of their own, but I should say that my Kim agreed that it would be perfectly fine for me to run my upcoming half marathon, pending a normal ultrasound.

The day after my first prenatal appointment I had an ultrasound. 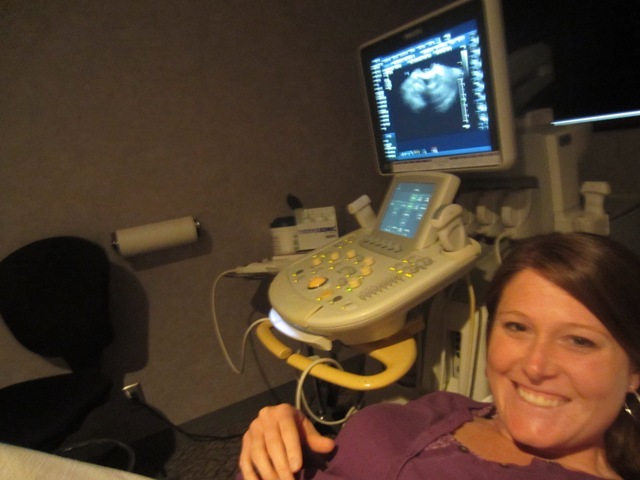 I have to be honest here and say that up until this point I have been emotionally prepared to not actually be pregnant.  I have read, seen, and heard too many stories about early miscarriages.  It was almost like I had built a wall between me and the baby.  However, once the ultrasound tech put that probe on my belly, flipped the screen where I could see it and said, "This is your baby.  Look at it's heart beat," that wall came down.  The second I saw that little heart beating so hard, so quick, I let myself believe that there was an actual baby, a little person, in my belly - not just that I was pregnant. There is a huge difference between those to ideas.   I let myself imagine holding it in just a few months and I saw how my family would grow.  I never knew I could fall in love with a picture, with someone I have never met, but I did.  I fell hard.  And that is when the tears started and they have not stopped.  Since then I randomly burst out into hysterical happy sobs.  Poor Dan, this is going to be a long 8 months.

I thought I would be able to stop worrying once I saw the heart beat, but the exact opposite happened.  Now that I feel like I know this baby, the worry of a miscarriage is even worse.  And then I realized that this is probably the least amount I will worry about this kid for the rest of my life.  Mind blowing.  How do parents calm their minds enough to sleep?

2. So tired.  I am sleeping at least 10 hours a night.  I go to bed at 8 and don't get up at my alarm. The other day I was so exhausted from walking up the stairs that I had to lie down on my bed.

3. A little nauseous, but no getting sick.  Drinking ice water helps a lot with that and I have been chugging water like it is going out of style.

Dan is more excited than ever.  He couldn't make it to the first ultrasound because of work and I really regret not working around his schedule.  I showed him the pictures, but it just wasn't the same.