The Secret Life of CeeCee Wilkes

I finally finished my book!

I started reading this book as a part of Peanut Butter Fingers Book Club.  I have always wanted to be a part of a book club, mostly because I wanted to have an intelligent conversation with someone that didn’t involve drug concentrations or cholesterol levels.  As most of my friends don’t have the same taste in books as I do, joining one online seemed like the perfect solution. The Secret Life of CeeCee Wilkes tells the story of a 16 year old girl who finds herself in a horrible situation all because she was brain-washed by an older boy she was in love with (I am sure many of us can relate to that – hehehe).

I don’t want to say too much, but I thought this was a great book.  I loved how it started out at the end of the story, so the entire time I was trying to figure out what was going to happen in order for the ending to occur.  I have a friend who always reads the ending of books first and if she likes it, then she will read the rest of the book.  I used to think this was an unforgiveable sin, but now I think she might be on to something.

I also loved that part of the book was based out of Chapel Hill, NC.  Throughout the story, memories of my year of living there flooded in.  I can’t wait to go back for a visit – only a few weeks now!

If you are looking for a new book to read, I definitely recommend this one.

I could not stop eating all day yesterday.  I blame it on my lack of snacks at work and the fact that Dan wanted to mow in the rain, so we didn’t get dinner started until 7, which is pretty much my bedtime.  Hehehe.

Breakfast was a two part-er because of an early meeting.  I swear there are pears underneath that ricotta cheese. 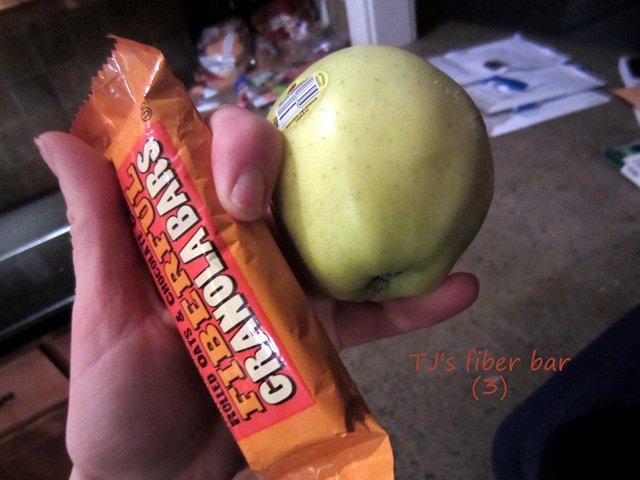 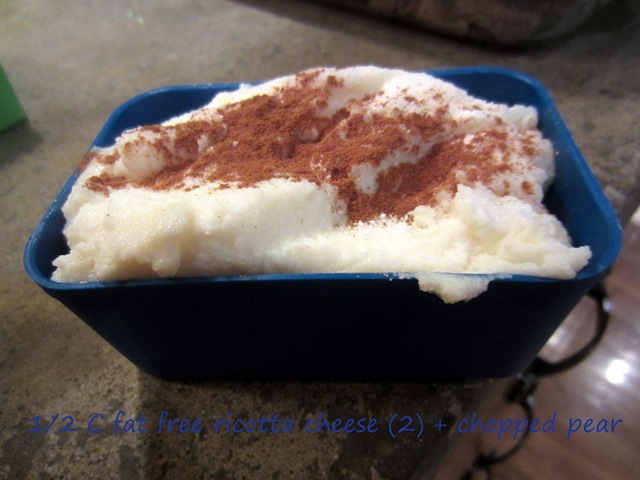 Lunch was leftovers from dinner the night before. Not so pretty but super tasty. 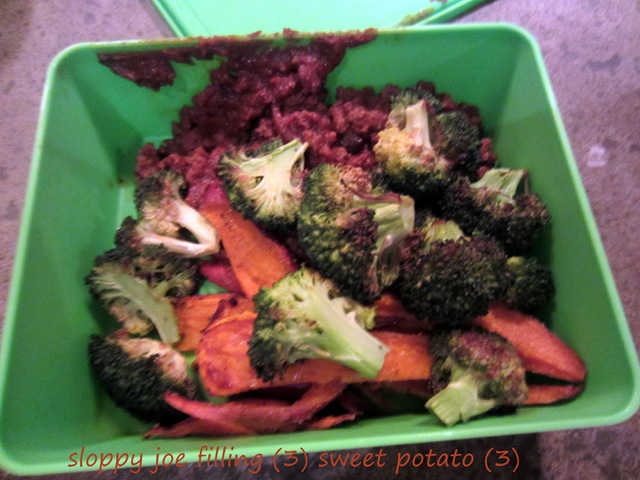 As soon as I got home, I went straight to the pantry and stared for 5 minutes until I decided to make some oatmeal with my new jar of chocolate PB2. 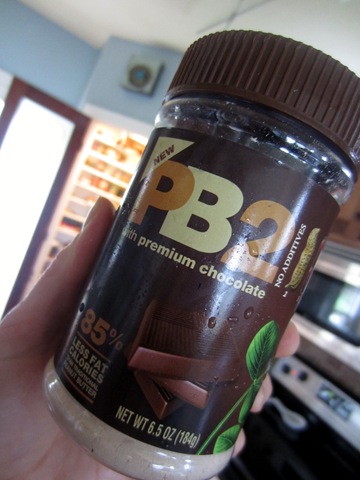 I followed Hungry Girl’s basic recipe for a growing oatmeal bowl, subbed a frozen banana instead of an apple, and added 2 tbs of PB2. It was very tasty, but I was missing that creamier (fattier) taste that comes with the peanut butter flavor. 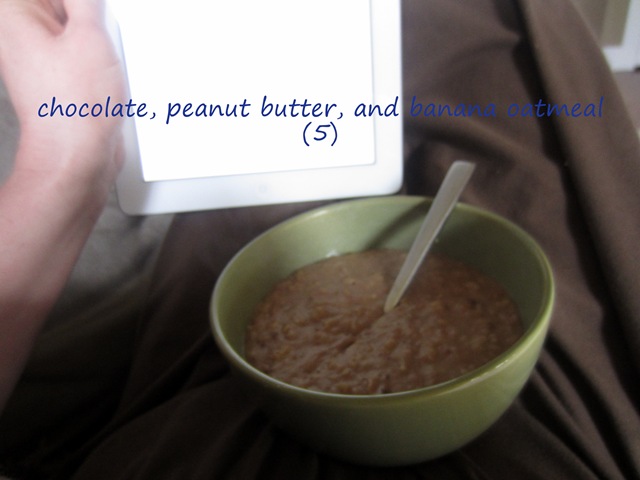 While Dan was mowing I ate way too many crackers. 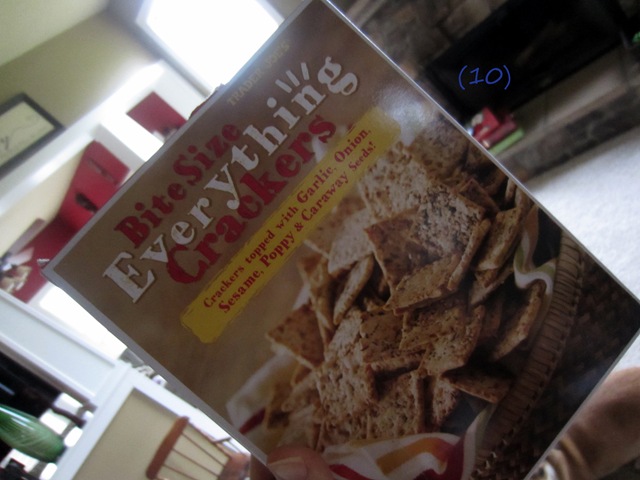 As Dan had already mowed in the rain, I figured he could grill in the rain too.  Thank goodness, because he made some pretty tasty BBQ chicken with some spicy sauce from a local BBQ restaurant. 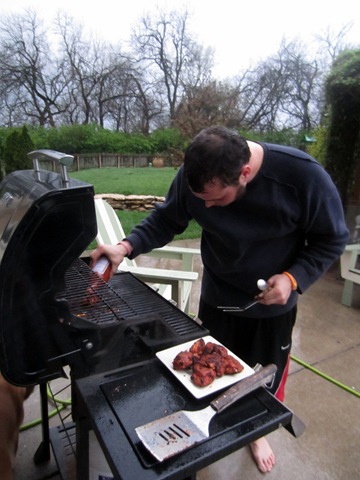 For the arugula salad, I added the same dressing I have been adding to my kale – 1:1:1.5 parts olive oil, lemon juice, and shake parm cheese.  (The shake cheese keeps it classy.) 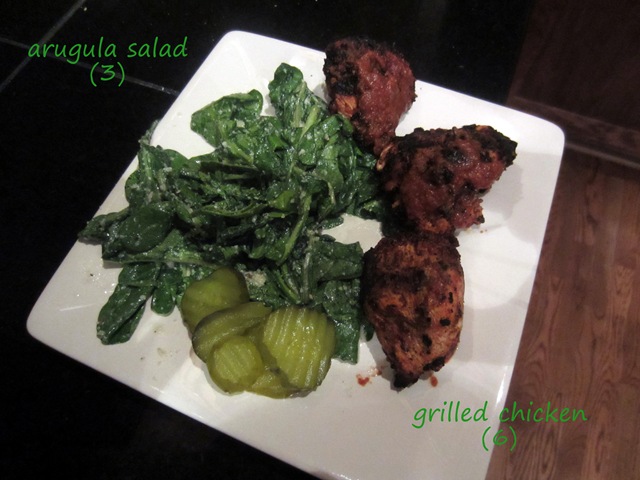 Even though I didn’t have any more points, I still wanted something sweet, so I decided to eat a few bites of a chocolate bar I had sitting in my pantry. 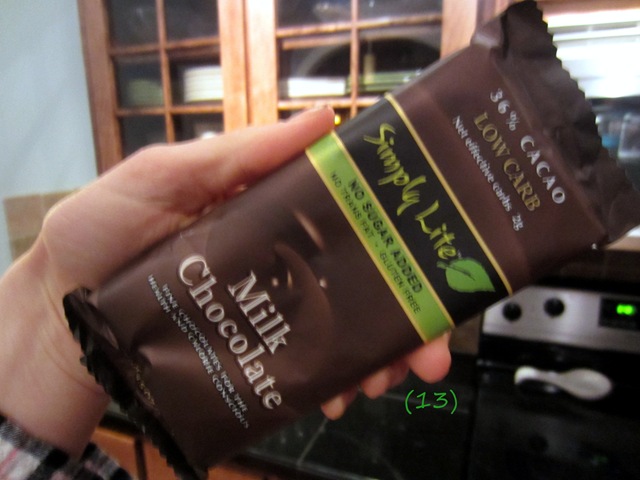 After eating 7/8 of the bar I read the little text on the back that said, “Excess consumption may cause a laxative effect.”  Ah crap.

Yesterday was supposed to be a sprint day, but I wanted to read my book, so I just jogged for 3 miles instead and today will be a sprint day. Then, I will fit my 10 miler in tomorrow or Sunday.